Padraig Harrington and Sergio Garcia have had a contentious relationship over the years. Despite being European Ryder Cup teammates, tensions have flared between the two on the course, and in interview rooms, most notably at the 2007 British Open and 2008 PGA Championship, where Harrington defeated Garcia. So who is the first person Harrington saw when he arrived at Rory McIlroy’s wedding in Ireland last weekend? The newly-minted Masters champion, of course.

But according to Irish Golf Desk’s Brian Keogh, the two major champions actually made up right then and there before Rory tied the knot. “I would say to you that right now at this very moment, my relationship with Sergio is the best it has ever been,” Harrington told Keogh.

Just two weeks ago, while Garcia was basking in the glory of his major breakthrough, Harrington went on the radio and, while congratulating the Spaniard, Paddy also dredged up their past differences, calling Garcia a “very sore loser.” But according to Keogh’s Irish Golf Desk report, the pair cleared the air immediately upon seeing each other at Ashford Castle. 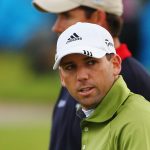 You may also like Padraig Harrington: Sergio was a “very sore loser”

“We have had a chat because clearly there was an elephant in the room about what I said and we have decided that we will look going forward at our similarities and the good in each of us rather than any other way,” Harrington said. “We are in a great place. If anything, it has worked out for the better… It’s a situation that had to be dealt with and it was dealt with. Myself and Sergio are on a much better footing than we have ever been.”

While it’s great to see old enemies become friends, this does not bode well for you if you enjoy the success of the U.S. Ryder Cup team.