Hard questions for the Big Easy

Ernie Els on the best shots he’s ever seen, mulligans he would take, his favorite days on the links and more.

Q: You won the 1997 U.S. Open at Congressional. Who were you paired with in the first two rounds?

A: John Daly and Payne Stewart. But Daly only played nine holes on Friday. [Laughs]

A: Hemingway caught a lot of fish and drank a lot of rum. He’s my man.

A: Tiger Woods at Hazeltine at the 2002 PGA on 18. With the ball below his feet, he hit a 3-iron from the fairway bunker over a tree and onto the green and made the birdie putt. 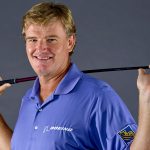 You may also like Man on a mission: Ernie Els is on a quest for one final major victory

Q: In an SI poll, your fellow players said you’re the guy they’d want on their side in a bar fight. Who would you want on your side?

A: Brooks Koepka looks tough, Dustin Johnson has a long reach, and for the haymaker, Brendon de Jonge.

Q: If you could go back and give yourself a mulligan, when and where would you cash it in?

Q: What young gun most reminds you of you?

A: Rickie Fowler is long, but not the longest, plays lots of different shots, and is very aggressive—like me.

Q: What’s the hardest you’ve ever laughed on the course?

A: At a pro-am in Belgium, a gentleman hit the ball off the heel and it went between his legs. He laughed almost as hard as me.

Q: Who would play you in “The Ernie Els Story”?

A: I’d say Brad Pitt, but I’m not good-looking enough.

Q: If you could relive any golf day, what would it be?

A: I got to play St. Andrews with my dad, Neels (below). That day can go on forever.

Because you can’t beat length and accuracy. Driving with persimmon was an art form, and Davis could drive it close to 300 yards, and very straight, with a wooden club.

He could land long irons softer than anybody, even Nick Price and Davis.

Amazing. From chipping with a 7-iron to lobs, those two could do it all.

His putts rolled beautifully and hugged the ground. He was an amazing green-reader, had great pace and was absolutely fearless.

He played within himself. If there was a target on the green he wanted to fire at, no flag would tempt him. It was safety first with Jack.