Hank Haney dishes on the big three, and doesn't hold back when asked about what's holding two of them back.
Sports Illustrated/Robert Beck

In an interview with John Huggan of the Scotsman, Haney is asked which member of golf’s big three will have the best career. Haney, who worked with Woods for six years, talked about what it takes to be the best through the prism of his experience with the 14-time major champion — and spoke most highly of Jordan Spieth.

“[Spieth] has that internal motivation that is second to none right now,” said Haney. “He has had no issues with his body. And he is best in putting, the part of the game that is hardest to improve. When you get to your 30s, you don’t normally become a great putter. So I have to go with him.

“His only downside is that he isn’t all of a sudden going to get long off the tee. He is running as fast as he can run in that department.”

We all know that Rory McIlroy has the kind of length that Spieth lacks, but what’s holding the 26-year-old Northern Irishman back?

“I do wonder about Rory’s motivation,” Haney said. “He’s made a lot of money. It’s human nature to ease off, but I don’t see the same dedication in him that I see in Jordan. There was the playing soccer thing. And the comments he made at the end of the season worried me. He said that the years Jordan and Jason just had motivated him, which is fine. But when did Tiger ever need that sort of motivation?”

Haney didn’t mince words when asked about Jason Day, either.

“With Jason you have to keep in mind that it has taken him a long time to figure out how to win at the highest level,” Haney said of the 27-year-old. “That time has been wasted. If he had figured it out quicker, I would have said he would turn out to be the best historically. If you look at his game compared to the other two, he should be the one.

“He is third in driving distance, sixth in greens in regulation, 14th in sand saves, fifth in strokes gained putting, fifth in three-putt avoidance and second in scrambling. He is by far the best player. Rory, in comparison, is 56th in scrambling. That’s a big difference.”

Haney would further point to putting as what sets Spieth apart from McIlroy and Day, saying that Woods and Jack Nicklaus were the “best pressure putters” in their primes.

But all this talk about the Big 3 comes at the expense of Rickie Fowler, who despite wins at the Players Championship, Scottish Open and Deutsche Bank Championship in 2015, is on the outside looking in.

“Rickie isn’t anywhere near the class of the other three,” Haney said. “He has to win a major to be up there with them. Actually, he just has to improve. Statistically, the top three are on a whole different level from anyone else. 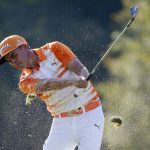 “But Rickie is on a trajectory to get close to the top. He has shown that he can handle the moment. That’s a great trait. His problem is getting to the moment. If he gets there though, he can handle it. But so can the big three. So even that doesn’t give him an egde. It just puts him on their level.”