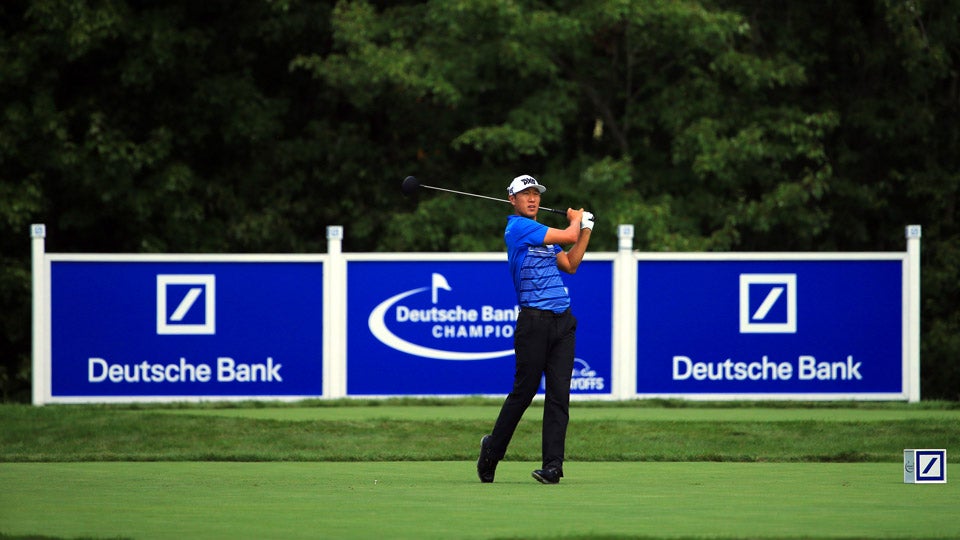 James Hahn is tied for the lead after the first round at the Deutsche Bank Championship.
Getty Images

NORTON, Mass. (AP) – Ryan Moore changed his schedule to pile up tournaments at the end of the year with hopes of getting into a rhythm going into the FedEx Cup playoffs.

He has no complaints with the results.

Moore backed up a good start to the playoffs with a 6-under 65 on Friday to share the first-round lead with James Hahn on a day when hardly anyone seemed too far away. After one round at the TPC Boston, 37 players were separated by three shots.

Phil Mickelson would be an exception.

Mickelson, who leads the PGA Tour in adjusted scoring average and said he wanted to win the Vardon Trophy for the first time in his career, took two swipes out of high grass in a water hazard to no avail, finally took a drop and made a quadruple-bogey 8 on the sixth hole. That sent him to 75 and in third-to-last place.

Moore and Hahn played bogey-free on a breezy day that allowed for good scoring, even though no one went terribly low. They were one shot ahead of Paul Casey and Fabian Gomez. The average score was 69.67 as 80 of the 97 players in the field were at par or better.

As usual, there were Ryder Cup implications.

Jim Furyk, J.B. Holmes and Daniel Berger were in the group at 67, all of them to make an impression before Ryder Cup captain Davis Love III starts filling out the U.S. team with three picks in 10 days. Holmes finished 10th in the standings, while Furyk was at No. 15 even though he four months recovering from wrist surgery.

SCORES: Round 1 Leaderboard from the Deutsche Bank

Love has said every American in the Deutsche Bank Championship would be on his radar, though Moore isn’t even thinking about it. His main goal is to get to the Tour Championship for the FedEx Cup finale, and this stacked schedule at the end of the year is working in his favor.

Along with a victory in the John Deere Classic, he tied for seventh last week at The Barclays to move to No. 11 in the FedEx Cup.

“I like how I’ve been feeling with my game,” Moore said. “This is actually the sixth tournament in a row, which I don’t think I’ve ever done in my entire career on the PGA Tour. I’m getting some positive momentum going into these events. How I’ve been doing it these last few years kind of wasn’t working so I decided to change it up and play a lot more and make a final push and then I know I get a little break.

“It seems to be working, whatever that decision was.”

Emiliano Grillo and Adam Scott played together and each shot 67, though they finished differently. Grillo hit a 4-iron into the hazard on the par-5 18th, took a drop and holed out with a wedge for birdie, looking blankly as the crowd roared before throwing down his club in mock surrender. Scott hit into a greenside bunker with his second shot, had a terrible lie and took two shots to get out in saving par.

“I should have chunked a 4-iron. That’s the way to make birdie,” Scott said with a laugh.

Jordan Spieth played with them and shot a 68, saying after his round he somehow was losing some 30 yards off his driver and would try to figure out why. Barclays winner Patrick Reed and Dustin Johnson also were at 68.

Jason Day, the world No. 1, opened with a 70 and then discovered his wife and two children were involved in a car accident near their travel bus. Day said his wife was taken to the hospital as a precaution, though everyone seemed to be OK.

The top 70 in the FedEx Cup advance after this week, and it was a big start for Furyk and Steve Stricker. Furyk is at No. 84, while Stricker barely made it into the field at No. 97. Both opened at 67.

Furyk is more concerned with getting to the BMW Championship next week than his Ryder Cup lot.

“There’s really nothing you can do but go play well,” Furyk said. “So I’m going to try to do my best not to really pay too much attention to the scoreboard and go play golf and worry about the process more than the golf.”

Stricker went to a different putter, a rare move for him, switching to a face-balanced model after his wife noticed last week he had trouble keeping it square. He decided to give it shot on Friday, and it paid off. His hope is that he gets to keep playing for at least seven more rounds.

“My goal this year was just to finish in the top 125 and get back into some of the tournaments that I had been play – The Players Championship, some of the majors. Then once I did that … you know, we’re all competitive. We all want to keep playing.”