Hackers Unite! The Mediocre Golf Association Is Playing Badly and Having Fun Doing It 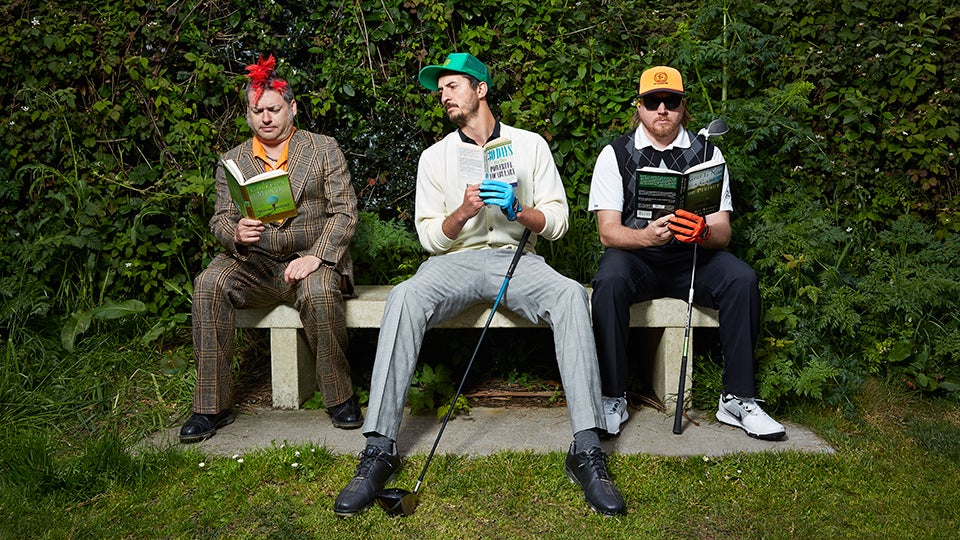 The growing ranks of the Mediocre Golf Association know they'll never go low. And accepting this has made the game a lot more fun.
Gabriela Hasbun

Jon Morley was born into a happy home in the Cincinnati suburbs and raised by loving parents. They taught him to see the world around him without limits. He could be a doctor, an astronaut, an author. Anything was possible, his mom and dad assured him, as long as he pursued it with full-throttle persistence.

Sweet people, the Morleys, although they clearly knew diddly about golf.

At some point in his teens, Morley swung a club for the first time. Most of his shots were lousy, but the few he caught flush were enough to hook him. He bought new sticks, sought the wisdom of swing gurus, emulated the players he saw on the tube. Slowly he improved. I got this, he thought, inspired by rah-rah TV spots and grip-it-and-rip-it magazine articles. I will bomb it like the pros, stiff every approach shot, NEVER miss a birdie putt!

Yeah, right. As time wore on, Morley wore out, frustrated by a game he’d failed to master. Only after college did it dawn on him that he’d been drinking the Kool-Aid. Just as he’d never pilot a spacecraft to a distant planet, he’d never be scratch.

Anything is possible? In golf? Please.

The veil of fantasy had been lifted, Morley says, and he came to view golfers for what they really are: victims of outsize expectations chasing a fanciful dream. He’d been one of them. But now he’d seen the light.

The secret to golf, he realized, is that there is no secret. A precious few have a gift for it. Most don’t. For the talent-starved majority, attitude adjustment is the only hope — a cheerful embrace of mediocrity.

“It was really amazing,” Morley says, standing outside the modest clubhouse on a bright blue afternoon at Franklin Canyon Golf Course, not far from San Francisco. “When I accepted that I just wasn’t very good, the game became a lot more fun.” Around him mill a gaggle of so-so golfers who’ve made similar peace with themselves.

Not that they’ve given up entirely. Quite the contrary. They’re here to compete in the Fore! Championship, a stroke-play event that will help identify the most middling among them. It’s a midseason showcase of the Mediocre Golf Association, a scrappy outfit that, under Morley’s stewardship, has taken averageness to unprecedented heights.

“By the end of today, someone will rise to the top of this mediocre heap,” Morley says. “And really, is there a greater honor than that?”

At 35, with a lean, athletic build, Morley earns his keep as a race-car-driving instructor. He also steers the wheel as “el presidente” of the MGA, a title he’s held since 2006, when he and a buddy, Willie Dills, hatched the idea while chopping up a par-3 course in San Francisco. Avid golfers of ordinary skill, they mocked themselves by making joking reference to the popular PGA Tour slogan: “These guys are good.” Sure they are — but what’s wrong with being just kinda all right?

What started as a punch line (“We’re more like the Mediocre Golf Association!”) gave rise to weekend outings, which picked up stragglers. Participation swelled. The outings evolved into competitions, complete with trophies and fake prize money. The “really big checks” that winners walked away with were exactly that: three-by-five-foot cardboard replicas that no bank would ever cash.

At first, marketing was strictly word-of-mouth. Then in 2012, Morley and Dills upgraded their website, and the buzz spread at the speed of broad-band. New MGA chapters sprang up in far-flung cities: Atlanta, Albuquerque, Adelaide.

Once little more than a ragtag men’s league (with a smattering of women), the MGA has grown into a global operation, with its own YouTube channel, about 1,400 dues-paying members in four countries, and a nine-month slate of tournaments, culminating each year in Las Vegas with a “world championship.”

The scores vary wildly, but the ethos never wavers. It’s printed right there, in the welcome note on the website’s homepage: “Face it, you suck. Join the MGA.”

As rallying cries go, it’s not exactly Rockne-esque. But the underlying sentiment has inspired a growing number of golfers. “In this f–king game, you’ve got to be able to laugh at your-self,” says Justin Davidson, a 33-year-old paramedic from Oakland, Calif., who signed up with the MGA just after its birth. On the par-5 first hole at Franklin Canyon, Davidson has cause to chuckle when his spine-cracking swing produces a daisy-cutter that whistles left into the weeds.

Though he’d entered the Fore! Championship as a 19-index, that hefty number isn’t going to help him here. The MGA handicap system turns the format on its head, penalizing stronger players instead of giving shots to weaker ones. Under the system, an 18-index is the cutoff. Anyone below 18 gets slapped with extra strokes; anyone above it receives no charity at all. A net tally of 80 is the lowest score allowed in competition.

In part, such policies are a safeguard against sandbagging. They also reflect Morley’s convic-tion that par, for most golfers, is preposterous.

“The lowest the average player is probably ever going to get is right around an 18-handicap,” he says. “Anything below that isn’t realistic.”

In the MGA, he adds, “bogey is our par. You shoot 18-over on a par 72? Congratulations. You’re pretty much scratch.”

There’s even a lexicon of lowered expectations. In MGA-speak, a par 4 reached in three shots is referred to as a “green in megulation,” a par is a “mirdie,” a birdie is a “meagle” — in short, otherwise familiar golf terms have an “m” for mediocre tacked on up front.

For outsiders, the lingo can be dizzying. For MGA-ers it’s a source of hope. After finding his wild drive on the par-5 opener, Justin Davidson has wedged back to the fairway and now faces an uphill 200-yard third shot to a pin set deep on a roller-coaster green.

“If I hole this one,” he says excitedly, “it’s a malbatross.”

According to the National Golf Found-ation, the average golfer in the United States is about 44 years old and has a household income of $91,400. MGA members are tougher to profile, and not just because their ranks include the likes of “Fat” Mike Burkett, a punk-rock singer and guitarist whose orange mohawk and marriage to a buxom dominatrix place him well outside the golf mainstream. Though “Fat” Mike has failed to show up for his tee time at the Fore! (speculation is that he was sleeping off a bender in his spouse’s dungeon), the 32-player field reflects a broad sampling of the human carnival. There is a teacher, a lawyer, a painter, a social worker, a marketing consultant, and a Facebook engineer. Ages span five decades. Incomes range from seven figures to whatever their meager pensions pay.

Nor can the players be strictly classified as hacks. For all his claims to mediocrity, Morley is a better-than-middling stick, a 9-index with a silken swing and a handy touch around the greens. On this sun-kissed afternoon, he is equaled in his adequacy by several others, including Dave Armstrong, a San Francisco plumber, and a loquacious Canadian named Steve Pottier, who earns a healthy living hawking tablet supplements that he claims will make any man longer — though not necessarily off the tee.

On the strength of solid iron play, Pottier tours the front nine in a tidy 40 strokes, but on the long par-3 11th he launches a balloon that drifts into a red-staked hazard, a spot that no pill on the planet can provide relief for. He won’t get a drop, either.

Although the MGA shirks convention in spirit, it hews closely to the letter of golf law. No mulligans. No gimmes. No foot-wedges. In tournaments, Morley says, “We want to make it serious, but not so serious that people will cheat to win, or get pissed off if they don’t.”

That same balance applies online. The MGA YouTube channel and website feature reams of legitimate info (MGA rankings, player profiles) next to larkish features like DuffVision, a slow-motion video analysis of hapless swings that plays like a Peter Kostis parody: “Right here, his elbow turns. That’s where he gets all his power — his elbows.”

If you don’t find that kind of thing funny, no worries — the MGA would be pleased if you just stayed away. A sense of humor is required for membership, Morley says, and he thinks that most golfers have one. In fact, he notes, the group’s cheeky outlook may be a solution to one of the game’s most stubborn issues.

“We’re not going to grow golf by making the hole bigger or by shortening courses,” Morley says. “That’s ridiculous. We don’t need to change the game. We just need to change how we approach it.”

Out at Franklin Canyon, the tournament continues under a thinning leaderboard. After his par-3 debacle, Pottier fades, and Morley’s putting is too patchy for him to make a run. But the plumber, Dave Armstrong, plays like a plumber, piping drives, fitting irons into tricky pin positions and, whenever he bends to pick up his ball, flashing the cleavage that is the hallmark of his trade.

With a par — correction, a mirdie — on 18, Armstrong closes with an 84 and, by four strokes, the victory. A short while later, amid beers and backslaps, Armstrong is presented with a small trophy and a huge check of no value.

The win helps raise his standing on the MGA “money list.” He’s on solid footing for the rest of the season, which includes a busy slate of events (including the Douche Bag Invitational and the Last Gasp) leading up to this month’s Mediocre Golf World Championship, in Las Vegas.

That competition will be the true test, with its imposing field of top mediocrities from around the globe. Among them: an affable Ohioan named Bill Morley. Yes, that’s right, the same Bill Morley who, years ago, urged his young son to shoot for the moon, to scale great heights, to never settle for second best.

Check out the old man now: He’s founder and president of the Cincinnati chapter of the MGA.