When he’s not playing golf, he’s talking about it. When he’s not drinking wine, he’s selling it. And when he’s not sawing branches in his backyard, he’s Instagramming statues of himself.

The Shark can now add another occupation to his growing list of gigs: venture capitalist.

According to a CNBC report, Norman has launched a new division of Great White Shark Enterprises that will provide capital to small and medium-sized businesses. Dubbed the Great White Shark Opportunity Fund, Norman’s newest undertaking reportedly has $75 million in capital already.

“A lot of small, entrepreneurial businesses can’t get capital to grow their business,” Norman told CNBC.com. “Many years ago my partner, David Chessler, and I invested in a couple small businesses and just saw the returns we were generating…We started off very small, but now we’re growing at a comfortable pace, and we have institutions interested because we have a performance track record that’s very positive. We don’t want to be a $20 billion fund. We just want to be like the space we’re in.”

Norman’s current business ventures, which include course design, apparel, real estate, wine and GPS technology to name a few, raked in a reported $300 million in revenues in 2014. 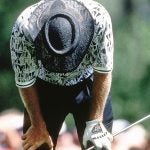 “We’ve weathered the storm and are seeing things turning around, especially on a global front where we’ve reached only 20 percent of our potential,” Norman told CNBC. “Banking regulations in the U.S. have kind of killed the entrepreneurial spirit a little bit, but there are places in this country where you can do well and make money.

“That’s why I started the investment fund. There are a lot of opportunities out there because of the regulations in place.”

As Norman’s businesses continue to grow and evolve, we can only speculate on what’s next. Maybe a role on Shark Tank?