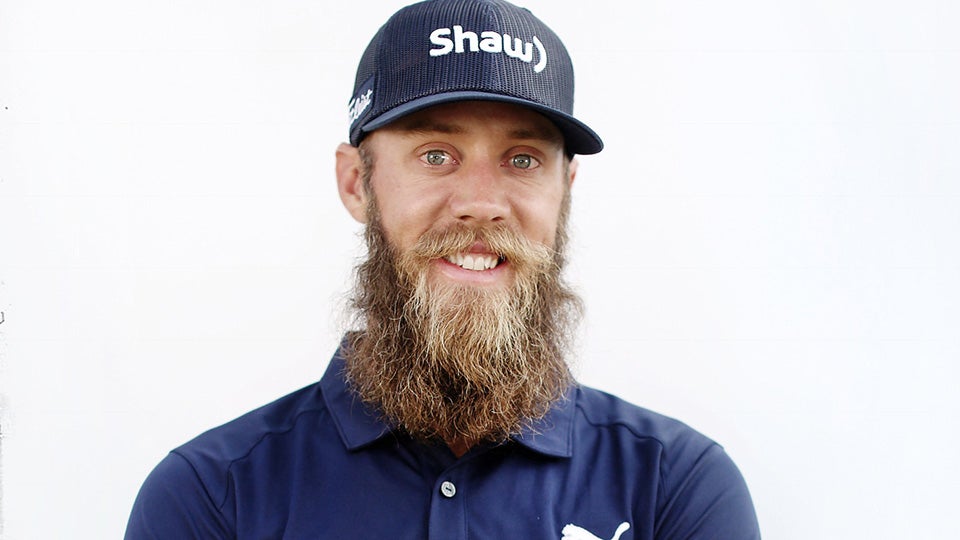 Golf has never had a famous beard, not counting Frank Beard, a pretty good player in the 1970s, or Old Tom Morris.

Baseball had relief pitcher Brian (Fear the Beard) Wilson. Football had Brett Keisel. Basketball has James Harden. Women’s gymnastics had… oops, my bad. It’s a “Duck Dynasty” world out there these days and golf, always last to notice fashion trends, has finally come crawling into the 21st century thanks to Graham DeLaet.

He doesn’t just have a beard, he’s got a mountain-man beard. So from a facial-hair standpoint, Sunday’s final round of the Valspar Championship is a complete mismatch. It’s DeLaet, the up-and-coming lumberjack type from Canada versus squeaky clean Bill Haas, who doesn’t sport a lot of hair under his golf hat, either. (A lot of us are in that boat, aren’t we, Jordan Spieth?)

Haas shot 67 Saturday to inch one stroke ahead of DeLaet, who’s 34 and has three wins on the Canadian Tour but hasn’t broken through yet on the PGA Tour in six seasons. He was just another faceless non-winner on the PGA Tour, a player with great potential, a lot of observers thought. Suddenly, he’s the most recognizable man in golf. Grow a huge beard, create a brand. Graham DeLaet and his beard are a brand now.

Somebody else may come out of the pack Sunday to win at Innisbrook Resort’s Copperhead course, but nobody will stand out as much as The Beard.

“He’s been growing it since just after the British Open in July,” said his wife, Ruby. “He normally grows a beard every offseason or every winter.”

That would be a Canadian thing, no coincidence.

“He was growing one like normal and he says, ‘I think I’m going to commit to it this time and see where I can go with it.’ He went online and watched videos on how to grow and maintain a good beard.”

So DeLaet may be the first Canadian who’s no longer low maintenance.

“He spends more time in the bathroom now than I do,” Ruby said, laughing. “Well, not really.”

“Everyone thinks there’s a reason behind it but he’s just having fun,” she added. “Honestly, I don’t care. I’m indifferent, I guess. It’s fun but if he shaved it tomorrow, I’d love him all the same.”

She’s from northern Idaho, by the way, and the DeLaets have a baby boy that Ruby was pushing in a carriage not long after her husband finished his round.

“Just a couple hours from the border,” she explained, “so I’m pretty much a Canadian, too.”

Ruby said her husband gets a lot of action on his Twitter account about his facial hair, good and bad.

“Most golf spectators think it’s pretty great,” she said. “Then you get a lot of older people who think it’s disrespectful to the game of golf–you know.”

Haas, 33, is a six-time PGA Tour winner who comes from an old-school golf family. His dad is Jay Haas, long-time tour veteran, Ryder Cupper, senior tourist and last year’s winning Presidents Cup captain. Asked to name the second-best beard he’s ever seen in golf, Bill asked if I was presuming No. 1 to be his playing partner on Sunday. Yes.

“Is there such a thing as a good beard?” he asked, drawing laughs. “When I was younger, my dad was always asking me, ‘Did you lose your razor, Bill? Did you forget your razor?’ He’d say, ‘Did Arnold Palmer have a beard? Did Jack Nicklaus have a beard?’”

Bill laughed himself and assessed his beard prospects: “I don’t have any hair on my head so it would look pretty silly on me.”

Bold prediction: There will be no beard in the Haas family. Ever.

As DeLaet finished signing autographs for fans, I asked him a question I’ve never asked another golfer before: Do you have a name for your beard? He and his beard gave me a quizzical look, followed by a quick answer: “No.”

So then I asked Steve Stricker, the 49-year-old Wisconsin tour player who’s still in contention here and tied for fifth, four shots behind Haas, another question I’ve never asked a golfer before: If you had to name Graham DeLaet’s beard, what would you name it?

Stricker needed two full seconds to think it over, then his face brightened with a wide grin.

“Sasquatch,” he said. “People are calling me Sasquatch, but his beard–that looks like Sasquatch.”

So here’s how the Valspar Championship shapes up: Hair today, golf tomorrow.