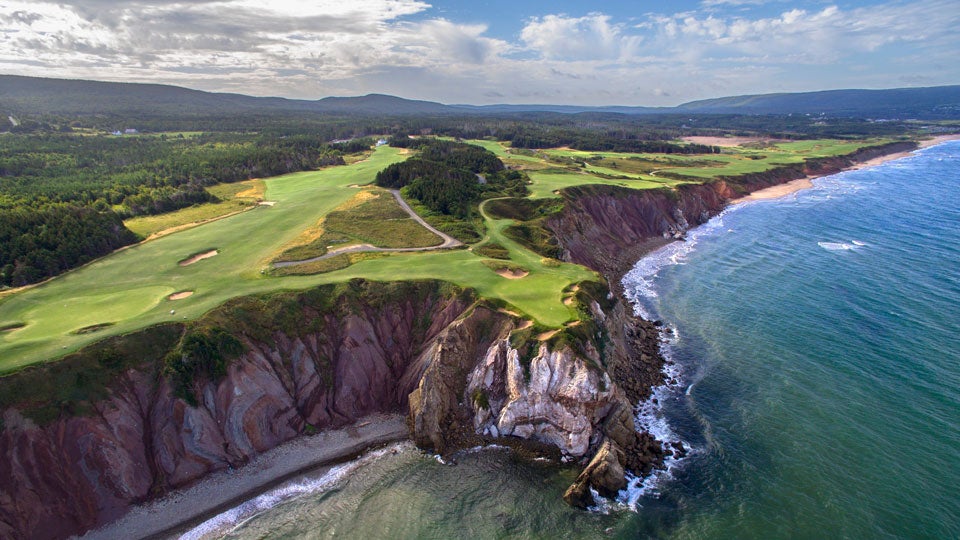 The 16th at Cabot Cliffs overhangs the Atlantic.
Evan Schiller

Jimmy Walker and the December issue of GOLF Magazine arrived in the mailbox the other day. Near the front, a few pages after a Johnnie Walker ad, is a two-page photo of Cabot Cliffs, a seaside Coore-Crenshaw course on Cape Breton, the Canadian island that is part of Nova Scotia (New Scotland), which dangles off easternmost Canada like a dislocated thumb. Cabot Cliffs was named as the magazine’s Best New Course for 2015. The muted snap will stir a golfer’s blood: a course bathed in beach light; heavy, dark sand in the bunkers; pale blue sea beyond the green and its open-wide entrance; fairways flecked with yellow. There’s not a condo or a tree in sight. Golf porn.

Cabot Cliffs is about a three-hour drive from Halifax, past a million trees and not much else. New Scotland feels remarkably similar to old Scotland. It has a New Glasgow, a Berwick, a Londonderry, all names you might know from the auld sod. I was at Cabot Links last month, hiking its hills, though it was closed for the season. I snuck in a few shots on a bright fall day that felt downright Scottish. I couldn’t resist.

For some reason, our cross-country game brings out the scofflaw in me. Golf.com offers a list of the top 100 courses “you can play.” That is, public courses. I could come up with a top-100 list of courses you can play on a sneak-on basis. You do need the move where you toss your clubs over a fence, climb it with your golf shoes on, then try to look like you belong. I suggest a confident nod to the guy blowing leaves out of the bunker. Also, wear a Ben Hogan cap. Nobody wearing a Ben Hogan cap will be suspected of playing as a sneak-on. The course looks spectacular. Whether it is playable or not, I of course do not know.

The day after my self-tour of Cabot Cliffs, I played her sister course, Cabot Links, now about three years old and designed by Rod Whitman. I was unprepared for the setting. Canada is so vast I figured the course would be in the wilderness, but it’s actually right in town, a mile or so down the road from Cabot Cliffs. Mike Keiser, the developer behind the five Bandon Dunes courses in coastal Oregon, was a force in the building of Cabot Links and Cabot Cliffs. I figured sprawling was part of his modus operandi. Bandon Dunes, is on an enormous swath of land, detached from civilization. But Cabot Links is right in the small working burgh of Inverness, hard by the main road. The setting is not quaint or historic or beautiful. (A detour here to the homeland: Machrihanish is quaint; Dornoch is historic; Turnberry is beautiful.) What it is, is unpretentious. PTL. The curse of modern golf is pretention.

The two-story hotel, nothing fancy but thoroughly comfortable, is right there. You park your car in a little lot and you walk easily to the little reception area, the little pro shop, the 1st tee, the two simple restaurants, your room. It’s a pleasure, the scale of it all.

I was there my wife. (Christine, not a golfer, and I spent the first summer of our married life in Scotland, nearly 25 years ago.) In the Cabot Bar, with a window facing the home hole, we ate square oatcakes with smoked salmon at dusk. Beside us was a table of locals drinking beer and tea while Canadian football played on the TV over the bar. I note our neighbors only because you seldom see locals at the bars and restaurants of most U.S. golf resorts. But this place is not a resort. I view that as a positive.

I was the last golfer out on the final day of the season, but not the last in. (Thanks for the wave, gents.) The green fee was about $50, U.S. You have to admire any golf course that does not practice price-gouging and lets you carry your own bag. Others were pulling trolleys, and most everybody was wearing some kind of winter hat on this raw day. The ground was firm and the course condition was a little ratty. Not a problem: As Rees Jones likes to say, scruffiness is a traditional golfing value. The fairways are wide, but the greens were too slow to putt meaningfully. They must be faster in the height of the season.

Cabot Links is often described as a “links course,” the first links course in Canada, in fact. That phrase — links course — is a common term of marketing, used to lure you to an authentic, seaside, windswept golf experience. Yes, at Cabot Links you are looking at the Gulf of St. Lawrence all through the round. I played through a two-club wind. But if a true “links course” is one built on actual linksland, I don’t think Cabot Links qualifies. It’s boggy in places, and the walk has too many interruptions between green and tee. That’s not what our founding shepherds had in mind. Does true linksland even exist beyond the shores of the British Isles? That’s the kind of question that keeps me up at night, or it used to, anyway. In any event, I would not call the stretch of earth upon which Cabot Links sits linksland. I would say the same of the terra firma that hosts the Pebble Beach Golf Links and the National Golf Links of America. All three are good courses. In fact, on certain days and in certain moods, N.G.L. is my favorite in the world.

Does it matter that there are 20 courses in Scotland, without even getting to the Open courses, that I would regard as “better” than Cabot Links? It does not. This is what we do, right? (We: the international society of golf kooks and bums.) We hear about a course we have not played, and we check it out. Maybe we go back and maybe we don’t. I’ll go back to play the Cliffs, for sure, and give the Links another go, ideally with a partner with whom I can have a match. Even vacation golf is improved with something at stake.

I hope like mad the Cabot courses can make a go of it, for the jobs those courses will bring to Inverness and for the pleasures golfers upon them will experience, and for one other reason as well. What we’re talking about here is two new “destination” courses without a hint of pretention. That takes nerve to do, these days, when anybody with a credit card is courted like the second coming of John D. Rockefeller or Kim Kardashian. In Inverness, Nova Scotia, golf is the draw. Hallelujah. I stand in awe.