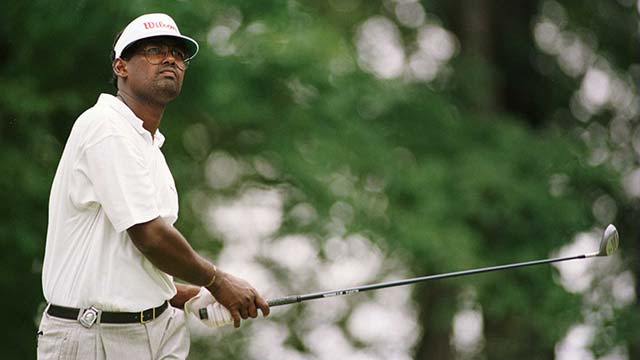 Vijay Singh tees off on the second hole during the final round of the 1996 PGA Championship. He finished T5.
Getty Images

Welcome to “Golf’s Greatest,” a new podcast series on Golf+ where we’ll revisit the game’s biggest stories, events and personalities through the eyes of the writers who covered them. We’ll also republish, in full, some of the best golf stories in the history of Sports Illustrated, Golf Magazine and GOLF.com. We’re kicking off the series with John Garrity’s classic story on Vijay Singh’s long, strange road to the top of the golf world, which appeared in the August 19, 1996 issue of SI.

It’s not often that a golfer finds himself at odds with the strongman dictator of his homeland, but that’s what Garrity discovered in 1996 when he went to Fiji to investigate Singh. “The Big Fijian” was already on his way to becoming one of the world’s best golfers but was still something of a mystery both to his peers and the press.

GO TO THE NEW GOLF+ HOMEPAGE

“Vijay’s reputation back then was just as a hard-working guy who was probably dull, but in any event was just sort of hostile to the media, so he was sort of a non-story,” Garrity said.

That couldn’t have been further from the truth.

Garrity recounted Singh’s journey from a patch of shade beneath a mango tree at one of Fiji’s only golf clubs to his near miss at the 1996 PGA Championship — with stops along the way in the Australian desert, Borneo jungle and Nigerian ghetto. Garrity also uncovered the truth behind allegations of impropriety that led to Singh’s banishment from two professional golf tours.

The writer paints a picture of a golfer who is determined, at times seemingly desperate, but ultimately triumphant.

GO TO THE NEW GOLF+ HOMEPAGE

“I saw Vijay Singh as one of the great redemption stories of all time,” Garrity said. “You talk about a comeback, when he was in Borneo this guy was as far down the professional golf chain as a golfer could possibly be, and it looked like there was no way out. But in a matter of several years, just by dedication and hard work and absolute persistence, he rose to the very highest ranks of the golf world.”

Garrity’s story was perhaps a bit too revealing for Singh’s liking. According to the author, “He’s done nothing but give me the fish eye ever since.”

You can listen to Madden’s interview with Garrity here:

Click here to read Garrity’s story in its entirety, reproduced from the pages of Sports Illustrated with original photography by the author.