The weirdest golf moment of 2021, according to an expert on weirdness in golf 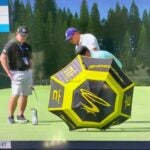 Bryson DeChambeau had a memorable moment with an assistant and an umbrella all the way back in January.

Kyle Porter understands that what entertains him about the 2021 golf season might not necessarily entertain you. But he also knows there’s a good chance that it will.

“It’s subjective, right?” Porter said on this week’s Drop Zone podcast. “The stuff that mattered to you and me and Dylan might not matter to my Dad.”

With the release of his digital book A Normal Sport, Porter has become a modern-day historian of sorts, cataloguing what he considers the most relevant moments of the 2021 PGA Tour season. But what “matters” has more to do with the entertaining minutiae and ridiculousness of the entire sport than it does with, say, who finished inside the top 10 on a given week.

To research the book, Porter scoured the web for memorable moments but also explained that he used Twitter as a repository for the game’s most hilarious moments. It’s clear from the book’s first few pages that this is a modern-day work, complete with engaging art, name-drops of online personalities and even hyperlinks to the good stuff, like Si Woo Kim and Charl Schwartzel sharing a supremely awkward handshake at the Masters.

In other words, Porter (whose 75,000 Twitter followers often send him screenshots of various bizarre moments with the caption “normal sport”) has become something of an expert on what it means to be entertaining in professional golf. We pressed Porter for the weirdest moment he encountered in his deep-dive back through the 2021 year. He took us all the way back to January to reveal the answer.

“In terms of the things that, as I went back through, I was like, ‘Oh my gosh, I can’t believe that happened,’ the one that stands out the most, because I just had completely forgotten about it, was Bryson having an umbrella guy running with his ball in Kapalua,” Porter said. “He was trying to shield his ball from the wind, which is just a preposterous but also a very Bryson thing to do.”

Ah, yes. Umbrella Guy. Not since Dealey Plaza in November 1963 has so much speculation surrounded a mysterious man holding an umbrella. The incident in question came at the Tournament of Champions, where Bryson DeChambeau and then-caddie Tim Tucker were rolling putts and testing… something. As DeChambeau rolled the putt, another member of Team Bryson walked alongside the ball, large Cobra umbrella in hand, presumably blocking the ball from the effects of the wind.

“There was so much Bryson,” Porter said of his year in review. “I went into this thinking [Jordan] Spieth would be kind of the through-line of the whole year because of the rollercoaster and everything he participated in, but Bryson was the through line. From the very beginning through the Ryder Cup.”

He reeled off a few of DeChambeau’s other highlights, from UFO sightings to hitting balls in the dark to his rock-star moment at Bay Hill to the netting incident at Harbour Town.

For the rest of Porter’s picks, from further hilarity to poignant moments and enduring lessons, listen to the Drop Zone on Apple Podcasts here, on Spotify or by clicking the player below.

Porter’s book, A Normal Sport, can also be obtained at ANormalSport.com — and he surprised us with a special discount code so plug in DROPZONE at checkout for a couple bucks off. Thanks for listening!