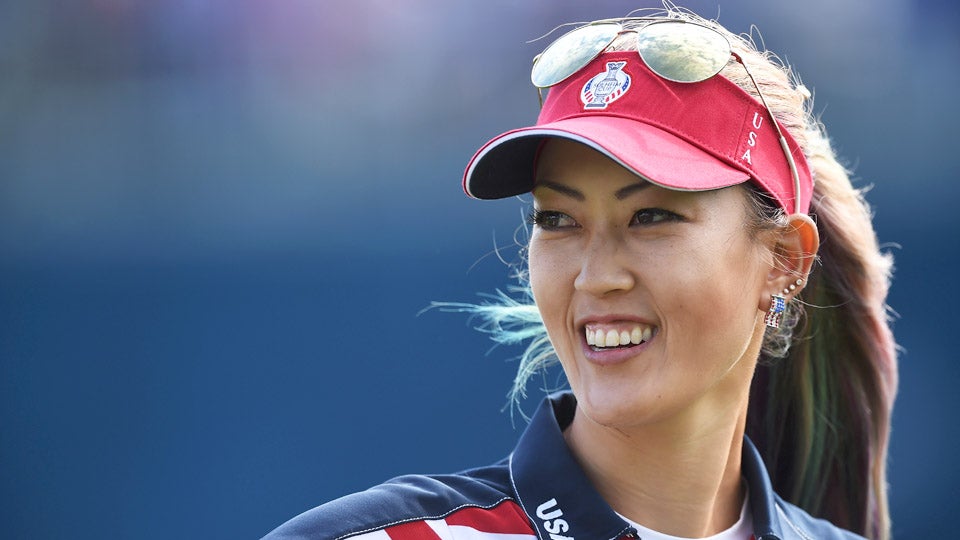 This week on Golf Live, host Ryan Asselta sat down with Michelle Wie. The 26-year-old U.S. Open champion discussed her new “old” swing, her off-season (cage-free!) swim with sharks, and what she’s learned during 14 years in the public eye.

Last year you battled injured and had some disappointing results. Did you set any goals for 2016?

For sure. One of my biggest goals is to stay in the present, and not to really stress about the future or analyze the past too much. I know what I need to do. My coach [David Leadbetter] and I, we sat down — actually he sat me down. It was like coming to coming to the principal’s office. He was like, “Michelle, I need to talk with you.” I’m like, “OK, what did I do?” He said, “Well, we need to figure out our game plan for 2016. You know you have so much potential. We need to tap into it and really get into [it].”

We went with a couple of swing changes this off-season. Going back to the flow-ier, smoother, simple swing that I used to have as a junior golfer that I want to go back to. So it’s been feeling great. And just kind of keeping things simple for this year. How has that process been? How nerve-wracking was that to kind of overhaul the swing a little bit to accommodate the hip injury?

Yeah, I mean, it’s tough. You know, the swing that I won the [2014] U.S. Open with, it felt great. But my body just couldn’t handle it. And I just kind of broke down after that. It’s just very difficult mentally. You know you can play well with the swing, but your body just can’t keep up with it.

But your body’s telling you to do something different. And I’m just going back to the more natural [swing]. We looked back at film when I was 14, 15. You know, back when I played in the Sony Open. And I’m just trying to get back into that smooth, flowing swing. And also that mentality of a kid. When you just go out there and you grip it and rip it. You don’t really think about much. That’s what I’m really trying to get back to.

It was awesome. Well, I totally thought there was going to be a cage.

You thought there would be a cage, but then there wasn’t?

Exactly. So my best friend and I, that was one of our bucket-lists to go shark diving. And we both thought it was not legal to go swimming just by ourselves. And I got there and I was like, “You called right? You made sure that there’s a cage? And she said, “Yeah, yeah, yeah.” And we finally get there and I said again, “You called right?” She says, “Uh, no, I didn’t call. But I’m sure there’s a cage.” I’m like, “I hate you right now. I can’t talk to you. We need to have a second apart.”

We got on the boat and they explained that we don’t need a cage. I mean, they’re really peaceful creatures. We got educated on the creatures themselves and what we needed to do.

I was the first one in the water. I put on fins, and I was very unconfident, and I swung my foot over, climbing down the ladder. And I remember thinking, “I can’t do this.” But it’s just really cool to put myself into experiences where there’s so much fear involved and you can overcome those fears. And that really helps me when I play golf. You know, be like, “I overcame that, I can overcome this.” And it was so cool being in the water. I mean, there were 30, 40 sharks around us. Just swimming around.

All of a sudden, a slippery six-footer doesn’t seem so terrifying.

I know you recently did a little short-game lesson with Tiger Woods. What did you take away with that?

Yeah, It was really cool. I’ve never done something like that with Tiger before. And it was really cool to spend some time with him. He’s the GOAT, you know. So it’s really cool to hear what he had to say to the people. And I definitely learned a lot. And then, just kind of talking about the game and whatnot. It was awesome.

Did you talk at all about reworking your swing due to injury? He went through a similar type of transformation.

Yeah, we definitely exchanged injury stories. And then I realized why we’ve had too many.

You have a lot of hobbies away from the game, especially your original artwork. Do you find that therapeutic?

For sure. I love painting, I love fashion. I also love cooking. I feel like my hobbies outside of golf keep me sane, it keeps me feeling like I’m normal. But I definitely want to get back on the golf course. I was very excited in January to pick up a golf club. I was really, really looking forward to it. And that was a really exciting feeling.

Do you think back now as a 26-year-old to those days when you were 12 years old and decided to compete on the PGA Tour?

I don’t regret anything in life. A lot of people ask, “Do you have any regrets? Would you do anything differently?” And I say, no. I’m not going to say that I made the right decision every single time. I made a lot of wrong decisions. I’d be the first to admit that.

But at the same time, those wrong decisions, you have to go through that. No one goes through a perfect life. And especially what I did. Especially what my parents had to go through. It was never really done before. You’re kind of experimenting. We were learning along the way. And I’m so happy that I went to college. I went to my dream school: Stanford. It was the best four-and-a-half years of my life. I wouldn’t trade anything.

How have you changed since then?

I don’t know. I would like to say I became more mature, but I don’t know if that’s true or not. I look back and I think about how fortunate I was. I’ve had so many great mentors in the game. Meg Mallon and Beth Daniel were two very formative figures in my life, in my golf career.

Meg really took me under her wing. And just to have someone like that, who had so much experience, who supported me going to college, who I talked to so many times. I’d ask, “I don’t think I can get into Stanford. Should I even go?” And she was the one who said, “You need to go.”

Do you still want to someday tee it up again with the guys on the PGA Tour?

It’s funny. There are so many great memories from it. And the amount of friendships that I made from playing those tournaments. Camilo [Villegas] and I laugh about it all the time. You know, I was still like five-feet taller than him when I was 14. It was just so funny.

But it was just one of those things that I feel very fortunate to be able to experience. Not many people can say, “I played a PGA Tour event.” And I feel very lucky that I got to learn from the best. And get to see them, be able to compete against them. And I’ll never say never. But you just never know. The pinnacle of your career so far is winning the 2014 U.S. Open. What was that rollercoaster ride like toward the end of the final round?

Why didn’t I just lay up? I hit it a little bit right. You’re kind of in a trance. You’re playing well. And then, it hit. I’m in the bushes and I can’t find the ball. And I’m like, “Oh my gosh. Oh no. What’s happening?” I really kept my calm. I think that’s where I feel like I was the strongest mentally. Because I could easily have broken down, but I just shut it all out. I knew what I needed to do. I had a really tough seven-foot double-bogey putt to make to keep that lead. And that was definitely the best putt I’d made. And the 17th-hole putt. Just knew what I needed to do. And that’s definitely something I look back on too, and try to bring forth in my upcoming events.

How much do you shape your goals and ambitions around the majors?

Yeah, majors have always been important to me. I think it’s always so fun. But there are so many other tournaments that are great out there as well. You know, winning in Hawaii was a dream come true to me. But out of the majors, I would definitely want to win the U.S. Open again. That would definitely be another dream of mine.

You’ve focused on your fitness and nutrition. You’re gluten-free and dairy-free. How much of a difference has that made?

Yeah, it’s been about seven, eight years since I’ve been gluten-free, dairy-free. I took a test and figured out that I was allergic. That’s kind of when the tests started really coming out. It’s amazing what eating right and working out does to you.

Fair to say you’re in a good place?