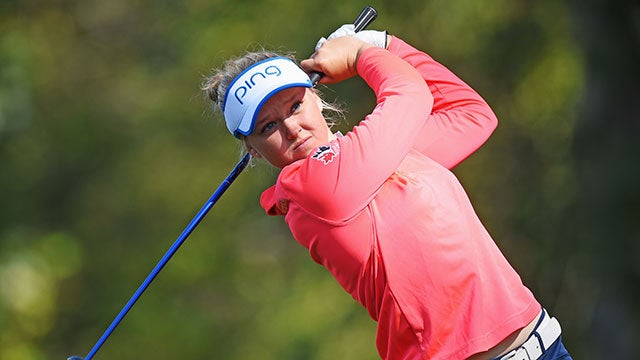 Canada's Brooke Henderson grew up in a house where the Olympics were the Super Bowl. She'll take that passion to Rio later this year.
Getty Images

Next week the LPGA tour convenes in Australia. From there, the women go to Thailand, then to Singapore. In the height of summer the best female players in the world will gather in northern California in early July for the U.S. Women’s Open, in England in late July for the Women’s British Open and in Brazil in mid-August for the Olympics. Last week they were in the central Florida horse country, finishing on a rainy Saturday at the Coates Golf Championship. Ha Na Jang of Korea won by two, Brooke Henderson of Canada finished second and Lydia Ko of New Zealand was another shot back. Jang is 23, and Ko and Henderson are 18. If you want to play that tour, you better have your passport up to date. Being young helps too.

Henderson doesn’t think about her age very often. It’s a privilege of youth. She was 17 when she won her first LPGA event last August—by eight shots. The travel requirements of her job don’t faze her in the slightest. She is all but a lock to represent Canada in Rio de Janeiro, and she can’t wait.

“I’ve been a big follower of the Olympics since 2010, when Canada won the gold medals in Vancouver,” Henderson said in a phone interview on Super Bowl Sunday. When she was growing up in Smiths Falls, Ont., Super Bowl Sunday was not a holy night in her house. But Hockey Night was. Anybody in Sweden or Russia or Canada would understand immediately what “gold medals” Henderson was talking about: the ones Team Canada won for hockey in the 2010 Winter Games, a men’s medal and a women’s one too. She recalls, “I think we watched it at school!”

Maybe you’re not feeling her exclamation mark. Maybe your Sunday went the same way it did for me and millions of other Americans: You went from the Waste Management Open to the Super Bowl to the chip bowl to Stephen Colbert without leaving the room. Nothing wrong with that. You might be thinking that golf doesn’t need the Olympics. A lot of Americans have that view. But Brooke Henderson is not American, and she’s already planning a year “with six majors, the five regular majors—and the Olympics.”

This month I have had two conversations with Ty Votaw, a PGA Tour executive and an officer of the International Golf Federation that made me realize how myopic my own blasé view of Olympic golf had been. The guts of it was this: In 2008 the IGF sent a survey to its roughly 120 member organizations, including federations representing Egypt and Latvia and Bermuda, and of course China and India and Russia. “Well over 90% of the federations responded that golf should be in the Olympics, and the note was consistently the same, that having golf in the Olympics is how golf would get government funding,” Votaw said. In other words, golf in the Olympics would be good, and possibly great, to bring the game to tens of millions of people with little or no exposure to it. Votaw, a former LPGA commissioner, also believes that Olympic golf can only do good things for that tour, which has never enjoyed the spotlight the way women’s tennis and skiing and skating have.

“The Olympics is the biggest sporting spectacle in the world,” Votaw said, which I found interesting, because I thought the Waste Management Open had that spot sewn up.

Votaw said that one of the keys to making the event work will be to get the best players in the world to Brazil, meaning Henderson and Ko and Jang but also Rory McIlroy and Jordan Spieth and Jason Day. The two 72-hole events—one with 60 females, the other with 60 males—will not have a purse. But that doesn’t mean sponsors can’t give massive incentives to their players for making it to Rio or winning in Rio. My feeling from the beginning was that an amateur competition at the Olympics would have been far more meaningful, but it was a hopelessly naïve view. The winning argument was that the best and best-known pros draw the most viewers. And those pros are motivated by a variety of things, money most especially.

I’m not counting Henderson when I say that. The Coates Golf Championship was played at the Golden Ocala Golf and Equestrian Club, a Ron Garl design featuring some replicas of world-famous holes. I asked Henderson about the 11th hole, which is a near-copy of the 12th at Augusta National, without the finicky winds. “I’ve seen the Augusta hole on TV, and this is exactly the same, with this skinny green with so much slope,” she said. She played it with a 7-iron for four straight days, about 140 yards, and made two pars, a bogey and a birdie, and was happy to do so.

I told Brooke that in 1996, the year before she was born, there was a late, ferocious and ultimately futile effort to get golf into the Summer Games in Atlanta, and that Augusta National would have been the venue for the Olympic tournaments.

“Really?” Brooke said. “That would have been awesome.”