Fox Sports Offers Clues Into What New Tricks They Will Bring To U.S. Open

As Fox prepares to make its U.S. Open broadcast debut at Chambers Bay next week (the start of a 12-year rights deal with the USGA), golf fans are eagerly anticipating a telecast that will feature Greg Norman, Joe Buck, Holly Sonders and Brad Faxon, among others. So what can we expect from the network come Thursday next week? I caught up with Fox golf coordinating producer Mark Loomis at U.S. Open media day to get a sense of what’s to come, from a technical standpoint.

Do you have any particularly innovative things in store for your first U.S. Open broadcast?

Our approach has been, how can we show the golf course from the player’s perspective more than we’ve shown it before?  So instead of starting wide from the green and pushing in to the player to show what the second shot looks like, [we want the perspective to be like] when you’re playing golf, starting in front of the player and pushing into the green to see where he’s trying to hit it. And so, how can we get some elevation in the fairways? How can we show people a little bit more of what the player’s view is? So that’s what we’ve worked on. And there are different ways to do that.

Can you give us some specifics?

We’ve built cameras that can get some height in the fairway, and we have these virtual flyovers, but then you can combine them with live aerial shots. And you can switch back and forth from a “real world” to the virtual world and you can get a better shot. We also have real system audio. Fox has always been big into audio, and so there’s a great history there.  And I think maybe around the greens we’ll be able to do some things that people haven’t been able to quite capture [in pervious broadcasts]. 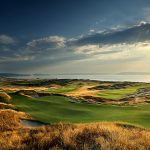 You may also like Chambers Bay Golf Course: Home of the 2015 U.S. Open

So does that mean we’ll be privy to some caddie/player conversations?

That’s the hope. When you’re watching golf, you kind of lose [the players] a little bit once they get on to the green, and how can we get a little bit more of that? And so we’re we’re trying to put some emphasis on that. And you know, one of the things you notice when you walk around Chambers Bay is that the contours in the greens are just striking.  And so when we came out here a year ago, I was like, “We’ve got to figure out how to show that.”  So we have some ideas on using shading and things.

So you’re incorporating some new technology.

We are. We’re trying. And in 2016, we’ll be better at it than we are in 2015. In 2017, we’ll probably try a couple things that we’re like, “Eh, you know, that’s okay, but we can probably do it a little better.” We came out here at the end of March and tested a lot of our stuff. There were some things that I was a little lukewarm on [before] that I was like, “Oh, you know what? That’s gonna be pretty good.”  So I think we’re getting there.

Everyone’s a critic when it comes to the quality of a golf broadcast, but who will you be listening to? What kind of feedback really matters to you?

Look, I want to know what everybody’s saying. I think there’s a little bit of truth in everything. Your friends are going to tell you how great it was, and the people that are competing against you are going to pick out anything they can that didn’t quite go right. That’s all good. I like hearing all that, because there’s truth in all of it. And you have to be thick-skinned about it, because if we’re really trying to move forward, there will probably be some things that people don’t like right away. And maybe we’ll go a little bit too far at first, and we’ll pull back. Or maybe [viewers] just need to get used to it. So that’s the question that you have to keep asking yourself.  But I love hearing feedback. And trust me, I get plenty of it. (Laughs)