Four years after suing the PGA Tour, Vijay Singh is lurking at the Tour’s flagship event 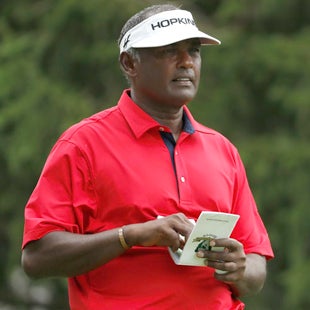 2008: Vijay Singh With reigning world No. 1 Tiger Woods recovering from knee surgery, Singh won two of the first three FedEx Cup events and mathematically clinched the title before even arriving at East Lake. The result led to a revamped points system, where no one can clinch the title before the final event.
John Bazemore / AP

PONTE VEDRA BEACH, Fla.— Nobody—not Fred Funk, not Jim Furyk, not anybody—has taken more advantage of the free range balls available to Tour players at the Stadium course than Vijay Singh, who lives on the beach a few miles south of the course. Through two rounds of the Players Championship, Singh is only three shots behind Louis Oosthuizen and Kyle Stanley, the leaders at nine under par. At age 54.

Will Singh’s play hold up through the weekend? Not likely. His par putt on Friday was a five-foot push-shove that looked tired. Vijay looked tired. He said in post-round remarks that he hits only half the balls he used to hit. He’s not wearing out the gym, either.

Still, little guys the world over with a stick-it-to-the-man mentality will be rooting for the Big Fijian this weekend, you can be sure of that. If you don’t know why, google this choice phrase: “Singh v. PGA Tour.” You’ll find 1,000-plus references to the nasty, protracted, emotional lawsuit brought by the three-time major champion. After his round, Singh, who over the years has often been surly with reporters if not completely unavailable, politely declined to discuss the suit and its impact on his play at the Players. But that lawsuit is the whole subtext for why Singh’s rounds of 70 and 68 add up to much more than your garden-variety 138.

Plus, there’s the age thing. The man is more than twice the age of Jordan Spieth, who shot 148 and missed the cut. Only three players are ahead of Singh on the leader board, and just five scored lower than he did on Friday, an unseasonably warm day that had Singh going to his towel regularly.

The battle for the senior prize this weekend has turned into a competition between Singh and 50-year-old Steve Stricker, who is at two under par.

Regardless of what happens, there’s a distinct pleasure in watching the man who has never changed anything in his swing for decades continue to make a move that Sam Snead would recognize. The all-day backswing. The rolling-thunder-review downswing. The cockeyed stare-down of his airborne shots. Same as it ever was.

When reminded that he had missed nine of his last 10 cuts on the PGA Tour, Singh, in his characteristic way, said, “I don’t know the last time I missed a cut.” (It was last week, at the Wells Fargo Championship.) And this next sentence may be the most revealing thing he has ever said, “I don’t try to remember what I did in the past.” For 45 years he has pursued golf with monastic devotion. Regarding the new-and-improved driving range at the Stadium course, Singh said, “It’s the best around here.” If there were a better one, he’d be there.

Singh is in the fourth year of his lawsuit over the Tour’s handling of his admitted use of (no joke) deer-antler spray and his confusion over whether it was a banned substance, or whether it contained enough of a banned substance to warrant having it on the list in the first place. Thousands of pages of legal briefs have been devoted to this matter, and, trust us, it is not interesting reading. His lawyer, Peter Ginsberg, is not a golfer or a golf fan, but he found himself following Singh’s progress on the Internet late on Friday afternoon.

Singh was playing with two other locals, Furyk and Billy Horschel. Singh wore an old-school white visor and white shoes, with pleated trousers and a lavender shirt. Suddenly it was 1997 again. The only blemish—the lone bogey—on Singh’s card on Friday came by way of his three-putt on 18. He lingered for an extra moment in the agony of the missed par putt, not even a half-mile away from the office of the PGA Tour commissioner.

When the round was over, Furyk and Horschel offered lingering condolence bro-shakes to Singh. Even since Singh filed suit against their organization, players do not seem to resent Singh, although it would be easy to see why they might.

Last month, Singh and Carlos Franco won a Champions tour event, the Bass Pro Shops Legends of Golf. Singh used a claw grip on his putting stroke then, did for the first two rounds here and was practicing with it late on Friday in the day’s last light. A familiar scene.

Reflecting on his start, Singh said, “I was ready to play well, I’m playing well and I’m excited about it.”