Former president Barack Obama kicks off Scotland visit with round at St. Andrews

Even presidents have golf bucket lists.

Former president Barack Obama finally checked a big one off his during his first trip to Scotland this week, teeing it up for a round at St. Andrews, the home of golf.

A crowd followed 44 around the course, with whom he stopped to shake hands and chat with before resuming play. On the par-4 3rd hole, reports say his caddie reassured him that there was no pressure…but despite that blessing, Obama looked at his tee shot and said: “Oh, that wasn’t so pretty.” 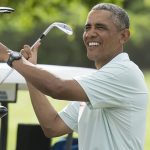 You may also like Barack Obama’s 11 most memorable golf moments in office, ranked

Obama will be giving a speech at a charity function in Edinburgh Friday night.