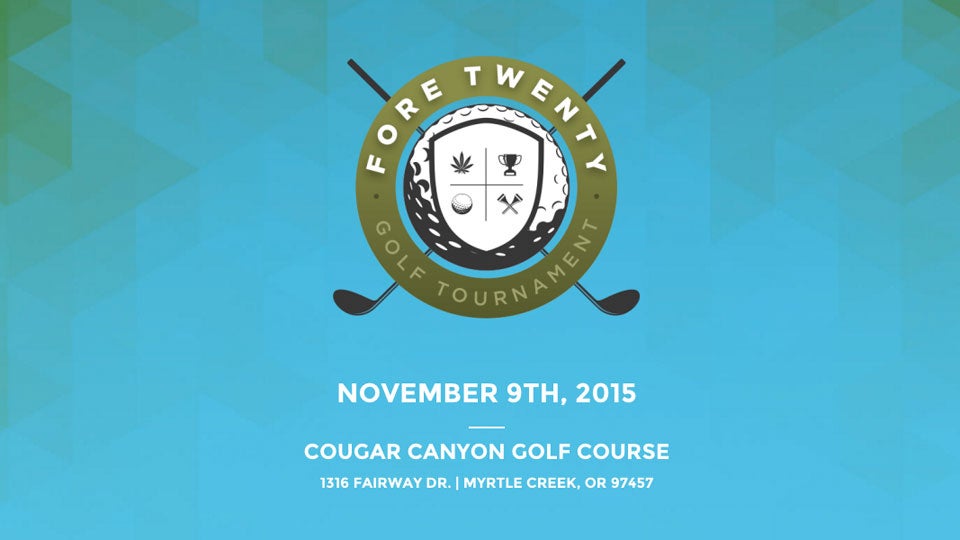 The Fore Twenty "Harvest" Tournament will be held at Cougar Canyon Golf Course on November 9.
foretwenty.com

An amateur tournament is taking place today in southern Oregon, and even if the greens and fairways aren’t perfect, we can guarantee the grass is good.

Billed as a celebration of marijuana legalization in the Pacific Northwest, the second annual Fore Twenty Harvest Tournament at Cougar Canyon Golf Course is expected to draw scores of business owners and employees from the growing cannabis industry for a day of schmoozing on the links.

Aside from offering a chance to hobnob, the event also aims to dispel the widespread image of marijuana users as Spicoli-like slackers whose ambitions revolve largely around late-night snacks.

“My focus is to paint a picture of good times, spread awareness, and offer a way to get your brand out there and network in a matter that’s different and selective,” Enos was quoted as saying in Leafly, a website that covers all things cannabis-related.

Better to gather on a golf course, Enos told Leafly, than in a hotel conference center or just “another hall.”

The inaugural Fore Twenty tournament, which was held last year in Portland, Oregon, attracted a field of some 200 players. And while this year’s turnout is expected to be smaller (it is, after all, harvest season), those who do show up will have a lot to compete for, including canned stashes of marijuana, joints dipped in cannabis extract and autographed memorabilia donated by the actor Tommy Chong.

More recently, in an anonymous poll conducted by ESPN, 40 percent of Tour players said the PGA Tour should do away with testing for marijuana. At today’s Fore Twenty tournament in Oregon, there will be no testing, unless you count the sampling of product giveaways.

In addition to an award for best-dressed golfer, prizes will go to closest and farthest from the pin and to players with the lowest and highest scores.

Like What You Read? Check out the all-new Extra Spin Homepage for More!