For Better or Worse, but For Bogey? My Fiancée’s 1st Trip to the Links 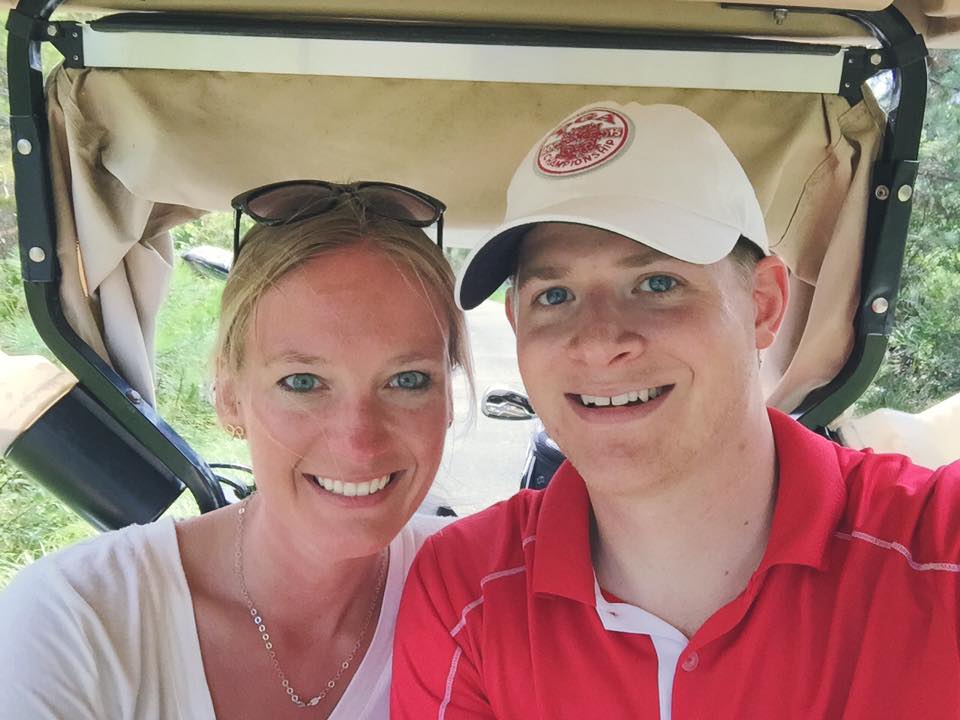 The author and his bride-to-be enjoyed their first round together.

I was standing over a tricky four-footer.

It was a big putt. After a scratchy start to my round at LPGA International I needed this one for my third straight par. It was raining and water was dripping down my neck, which helped me forget about the soaked socks in my leaking golf shoes.

I knew as soon as I struck the putt that I had pushed it.

Then, a concerned female voice cut through the silence.

“Do you always talk like that on the golf course?”

The speaker? For the first time ever my fiancée was playing with me. You can learn a lot about a significant other on the golf course.

You know the adage:

Don’t marry someone until you’ve talked about finances.

But what about this? Don’t marry someone until you’ve played golf with her.

So there was Natalie, who became my fiancée a couple of months ago, playing her first round, on the Jones course at LPGA International, during a recent vacation to Daytona Beach. Club pro Mike Burgess and teaching pro Craig Shankland, who is one of GOLF Magazine’s Top 100 Teachers, graciously allowed us to spend one of our mornings at their beautiful facility, and they didn’t mind that it was Natalie’s introduction to the game.

She had hit balls here and there during her 28 years of existence, but golf never stuck. I figured she could be a pretty good player if she gave the game a shot. She’s athletic — I’ll admit she spins a better spiral than I do when we toss the football around — and her dad’s an avid player. This has to work, I thought. I just needed her to try.

But what I thought would be a casual, everything-inside-four-feet-is-good kind of round turned into an open invitation to learn more about each other — for better or worse.

Nat asked more questions than I thought she would, which was both surprising and, at times, humbling. It was as if I was taking a test, one my teacher had never bothered to tell me about.

The interrogation began on the 1st fairway, when I dropped a ball after pulling my approach into the water. “Isn’t that cheating?”

Then on the 2nd green, when I gave myself a three-footer after a lipout for par. “Why did you pick that up?”

She also proved she could be a more than adequate replacement on CBS for David Feherty, who, by the way, she wouldn’t know from David Hasselhoff. This occurred after she missed a six-footer by powering it, oh, about 24 feet past the hole. “That would have gone in if there was a backboard.”

Finally, there was the analysis in comparing her worm-burner to my shank. “In some ways, mine was better than yours.”

She also showed she might be the writer in the family. One of her analogies as I crept up a fairway in a cart while she topped a couple of shots: “It’s like I’m a kindergartener riding a trike and you are the parent on the bike trolling along with me.”

But I’m happy to report that she had fun. She carried her trusty 3-wood like a sword, she looked at me like I was insane when I told her the bunkers needed to be raked, she hit putts with the touch of a truck driver and she constantly talked about how nearby golfers were disrupting her “flow.” She even perfected golf lingo later in her round. (It was not suitable for print).

On a 150-yard par-3, she pounded her tee shot just right of the green. She didn’t finish many holes, but on this one she tapped in for bogey. I told her that was pretty good. She beat me on that hole, as I spent most of it in a greenside bunker the size of Rhode Island.

After a couple of good tee shots she looked at me like a proud 6-year-old who had just learned to tie her shoe. On the 9th green she jumped for joy after making a nine-footer, then quickly became subdued because she didn’t want to look silly in front of “all the people.” (No one was watching.)

But the best part of the day came about two hours after we had left the course. As we were getting ready for dinner, she asked how much it costs to go to Chelsea Piers, which is the closest driving range to our NYC pad.

“Well,” she said, sheepishly. “I’m never going to get better if I don’t practice.”