Nailing down Erik Anders Lang’s whereabouts is difficult, but appreciating his transglobal style is easy It’s a chilly morning in early February when Erik Anders Lang—wearing a toothy grin, holding a cup of coffee and sporting his notoriously disheveled curly blonde hair—opens the door to his sun-filled Los Angeles home. The 1,600-square-foot abode is, in many ways, a direct reflection of his character—it beams warmth, personality and style.

There’s a lot to learn about the 38-year-old Lang, who’s increasingly considered to be one of the most interesting men in golf. First and foremost, it’s important to know that he travels more than 130,000 miles each year to play golf. While some of his trips involve just a single round at a conventional course, most of his adventures are epically long, and string together loops at little-known destinations played in extreme climates.

While it’s relatively easy to explain who Erik is—an enigmatic and avid golfer who thrives on exploring all corners of the earth—it’s tougher to succinctly describe what he does. Is he a journalist? He certainly behaves like one as the host, writer and creator of SkratchTV’s popular YouTube show called Adventures in Golf. Is he a filmmaker? He’s in the midst of producing a golf documentary called Be the Ball, which explores mental toughness in the game. Is he a social media influencer? Unquestionably. He has some of the fastest-growing Instagram, YouTube and podcast channels in golf. In truth, he’s a little bit of every one of these things, each an expression of his curiosity and relentlessly authentic demeanor.

On this Monday morning, Lang is prepping for a two-week adventure in New Zealand, shortly followed by a six-day jaunt to Japan. He shared with us his secrets for staying stylish on the road, no matter the whereabouts or weather. So wise up and take notes, because this is one extremely tough guy to pin down.

“When I play a laid-back public track, I opt for comfort above all else. My goal is to transition to a cool dinner afterward without having anyone know I just played golf.” 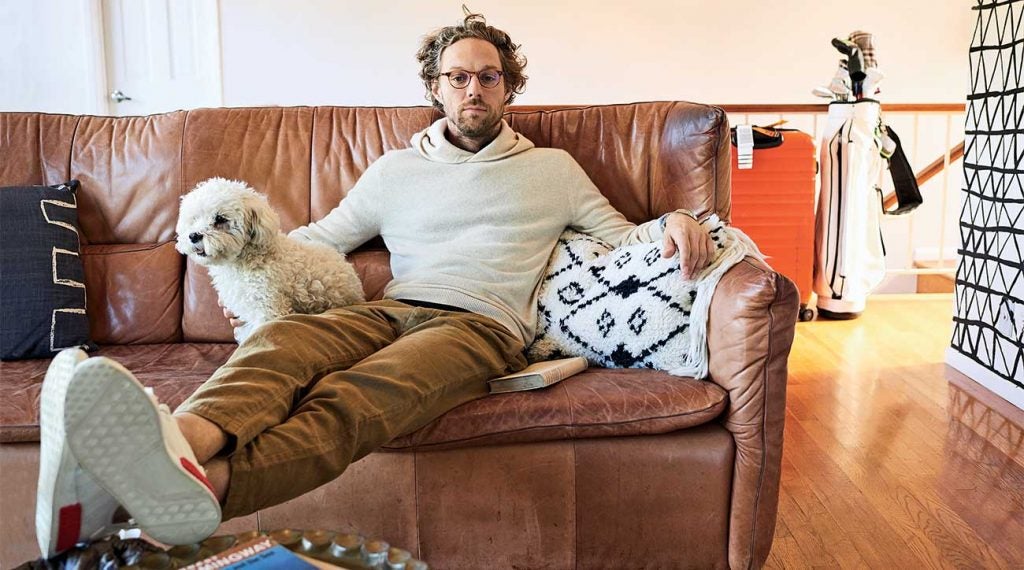 Tarmac to Tee Box (below)

“If I’m heading straight to the course from the plane, I wear dark colors to hide any mistakes I might make during a long day of travel. Layering and synthetic fabrics are also a must, because the temperature inside a plane is always an unknown.” 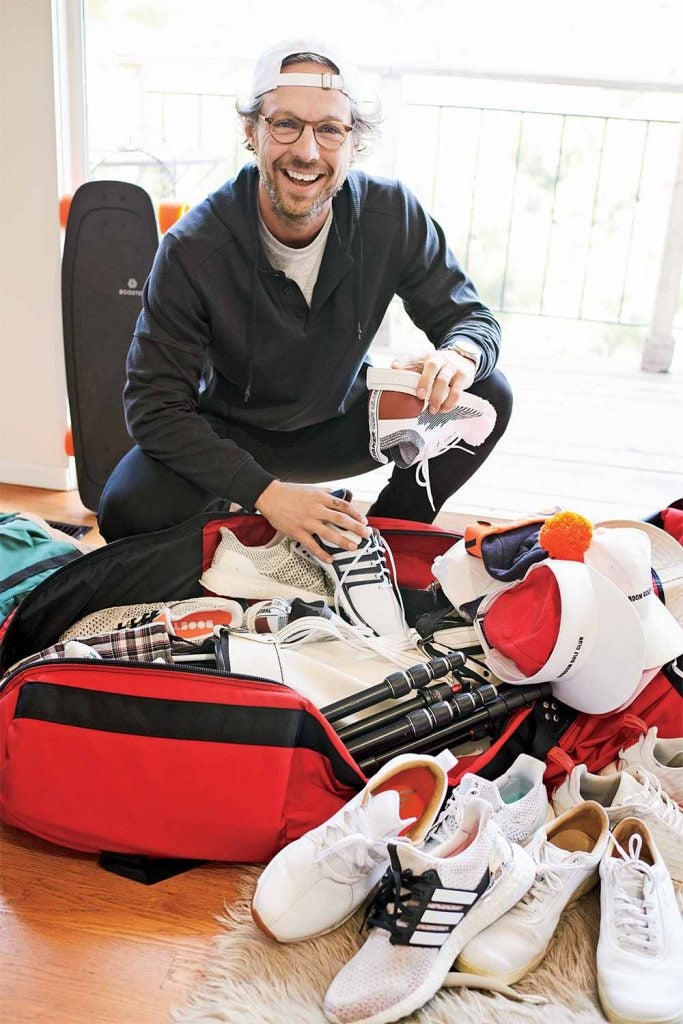 “I enjoy respecting the rules of a private club, so I opt for proper golf shoes. Then I’ll pair my crispiest polo with sharp-looking trousers that offer plenty of stretch. Playing a private track is the one time I actually want to look like a Tour pro.” 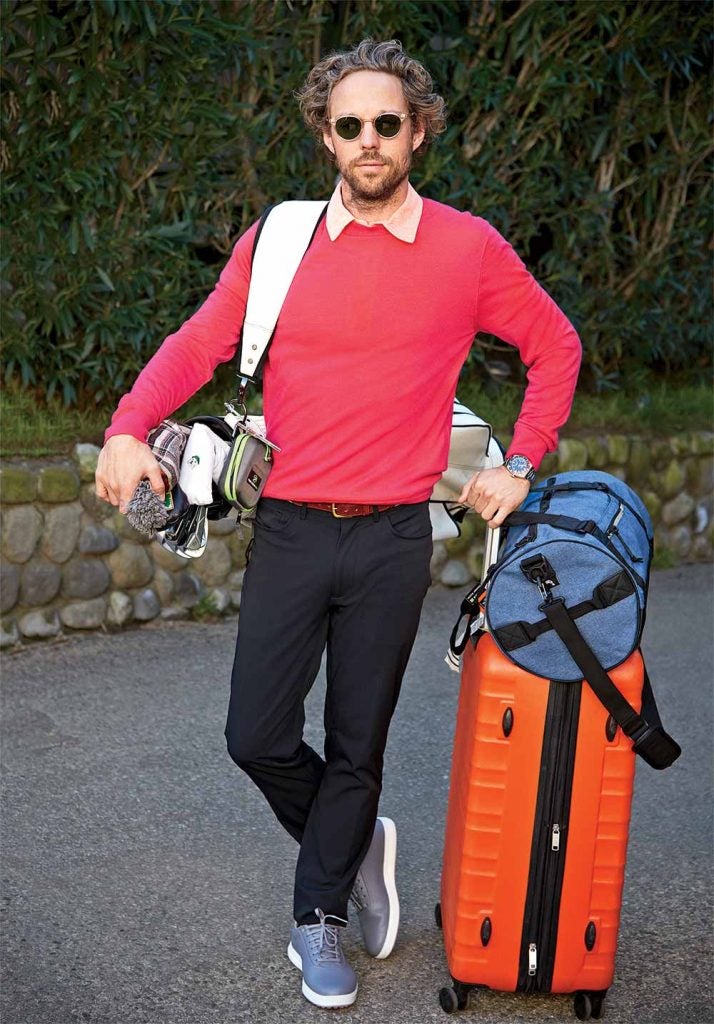 Lang’s Tips For Packing With Style in Mind

1. Make neutral colors your go-to.
“If you pack in groups of beige, black, navy, white, etc., you’ll easily pull together outfits that match and pair pieces that look great together.”

2. Use travel cubes.
“I buy mine on Amazon. They come in different sizes and help me compartmentalize my polos, pants, socks, underwear, etc., so that I never waste time looking for any single piece of clothing.”

3. Prep your dopp kit.
“I have a toiletry bag packed with my on-the-road essentials, and I never unpack it. I make sure everything in it adheres to carry-on-size guidelines, and it’s always ready to go, which gives me zero opportunity to forget necessities.”

4. Don’t think in terms of outfits.
“I like the experience of getting dressed every morning based on how I feel, where I am, what the weather is, etc. There’s no way to do this ahead of time, which is why I don’t pack in outfits. Instead, I pack clothes that generally live within certain families of colors, and assemble outfits on the go.”

5. Always… overpack.
“Don’t be afraid to bring more than you think you’ll actually need. I’d much rather come home with clean clothes than run out of outfit choices and wear something I’m not entirely comfortable in.”

Apparel
Sleeves for all seasons: 6 weather-ready golf polos and pullovers

Miles traveled per year to play golf: 130,000+
Longest nonstop flight ever taken to play golf: 15.5 hours
Three most exotic places ever visited to play golf: Northern India “I visited Mumbai to discover and experience what locals call ‘slum golf,’ which is played in the streets. I even built a ‘slum stick,’ which is a club made simply from an iron rod.” Nullarbor Links “Running along the Eyre Highway, starting in Kalgoorlie [Western Australia] and ending in Ceduna [South Australia], Nullarbor is an 18-hole, par-72 golf course that tips out at 848 miles, making it the longest course in the world.” Askernish Golf Club “Located on the Isle of South Uist in Scotland, Askernish is an 18-hole track designed by Old Tom Morris. It’s called the Lost Course because it was built in 1891, then eventually used as an airstrip before being restored to a course in 2005.”