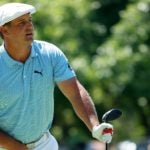 Bryson DeChambeau led the field in driving distance and tied for 3rd at Colonial.

FORT WORTH, Texas — There’s an updated version of an old golf cliché that’s bound to catch on: Drive for show, wedge tight dough. Bryson DeChambeau — idiosyncratic Texas golfer, now with more beef the ever — took that hoary phrase to a new place, here at the Colonial Country Club. He finished a shot out of the two-man playoff won by Daniel Berger and is still looking for his first win since November 2018. But his play served as an APB: Le Professeur is back. There’s more Bryson to love now than ever before. Come and get it.

Will he win before this intense and truncated year is out?

Will he contend in majors?

Will he anchor the Ryder Cup team?

That Garden State parking lot showdown between the two? So 2019. So pre-pandemic.

After one week of this five-week, fan-free Return to Golf thing there’s one revelation and it’s not that Daniel Berger is good at golf. It’s that Bryson DeChambeau, over the course of this three-month Covid-19 pause, got bigger (20 pounds bigger, by his estimate) and better. Yes, it would be easy to read too much into his four solid rounds at Colonial (65, 65, 70, 66). But when you hit it 20 and 30 and 40 yards past the game’s longest hitters, and in play, with sound mechanics, that’s not a one-off. That’s repeatable. It’s a recipe.

How hard is any par-4 when you can cover 480 yards with a driver and a wedge? Name a single par-5 that this guy can’t reach with a driver and some kind of iron? We’re talking about kick-in birdies and low-stress golf.

No-sweat 3s = Tour happiness. Bryson once wrote that on a chalkboard. He was 2.

Sunday here was sunny, hot and windy. DeChambeau was playing in a twosome with the No. 1-ranked played in the world who happens to be the best golf-ball driver golf has seen since Greg Norman. McIlroy’s physique has changed markedly over the past decade. He’s almost barrel-chested and he’s lost every bit of his late-teen baby fat. He looks like an athlete and when he gets off a bike, stationary or otherwise, sweat pours from his every pore. One of his patented moves, likely a subconscious one, is to run up hills and steps after holing out on 18, bounding his way to scoring. Well, DeChambeau had drives on Sunday that went 30 yards passed McIlroy’s. Rough means close to nothing to DeChambeau, especially if it’s dry. The last player to really separate himself from the rest of the field by length was Tiger, in his early 20s. Now comes this guy.

Tour driving statistics don’t allow for real-world analysis. As Woods has often said about Dustin Johnson’s length, he has another gear — and another 20 yards — when he wants it and needs it, when the conditions are ripe for him. The wind, the shape of the hole, how he’s feeling, where he is on the leaderboard. That’s why DeChambeau, driving it so far past McIlroy, who wasn’t holding back, was so revealing.

In DeChambeau’s own telling, he was flying the ball — just tee to landfall — 295 to 300 yards a year ago. “Now I’m flying it, with no wind or anything, probably around 325, 330, very easily,” DeChambeau said. A 325-yard drive in the air, with one hot bounce and a lot of roll, can turn into 360 in the blink of an eye. The way DeChambeau swings, it’s mechanical, it’s a hit — there’s very little release, very little lag, very little side spin on his shots. He hits it so hard off the tee, and so high, with so much climbing spin the loft on his driver is down to 5.5 degrees and still he hits nothing but moon shots.

He’s a basher and a smasher, with his single-length clubs and a physique that brings to mind those XXL University of Miami offensive linemen from 30 or so years ago, with their tanned, drumstick arms, heavy legs and thick middles. The modern polyester golf shirt is so thin and tight, the outline of DeChambeau’s stomach is there for all to see, even as he’s gone, in his accounting of it, from a size medium shirt last year to an XL now. He says he weighs 235 to 240 pounds, over the course of his 73 inches. He’s always been country strong but he’s way beyond Jethro now, for those of you who recall the big guy of the Beverly Hillbillies.

DeChambeau does things his own way: the single-plane swing, the single-length irons, the thick grips, the robotic putting style. He likely deserves more credit for thinking for himself, right down to this weight gain. He can still be painfully slow while sizing up putts but he’s much faster on his full shots than he was a year or two ago. He’s ready. He has two books in his back-right pocket as he plays, one just for the greens, the larger of the two marked B.A.D., for his initials. He’ll use his white Hogan-style cap to clear debris off the line of his putts now and again. Hogan was a god at Colonial. He did things his own way, too. Hogan famously had little use for Arnold Palmer when Palmer first came on the golf scene. Palmer was a brawny, country-strong basher, too.

DeChambeau was in a tie for the tournament lead when he made a bogey on the short par-4 17th hole on Sunday.

“Unfortunately, I got hosed on 17, caught a jumper out of the first cut and was not expecting that and flew it too far,” DeChambeau said after the round. It was a funny comment, but not in a ha-ha way. You would never have heard Hogan or Jack Nicklaus, as you would never hear Tiger Woods, say they got “hosed” on a jumper lie. That’s a fundamental part of the professional’s job. The only thing he couldn’t do, with the pin in the back, was hit it over the green — and down a hill.

His hat size didn’t change over this three-month break. “There aren’t very many muscles up there that I can train,” he said. “That’s pretty much stayed the same. It is what it is.”

That final line, of course, is straight out of the Tiger playbook. So is driving it longer than everybody else.

“Had I putted pretty well, I would have won by a lot this week,” DeChambeau said. That sounds familiar, too.

He’s playing this week, at Hilton Head. He’s playing the week after that, at Hartford. You’re going to see a lot of Bryson DeChambeau, over these next five months. Listen for those footsteps. Here he comes.

Winless rising star closes with 7 (!) birdies in a row to shoot epic 61