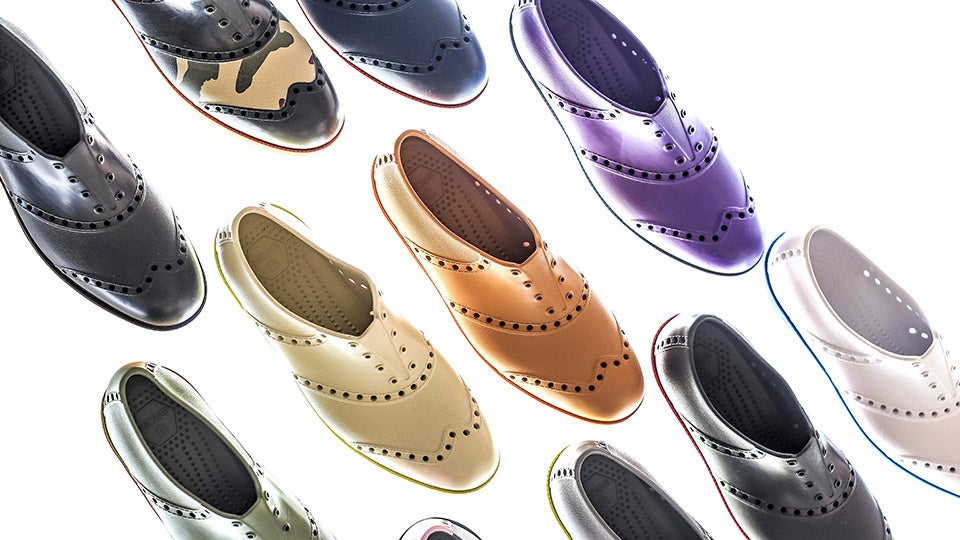 Every week we bring you the low-down on three of our favorite products in golf apparel, merchandise, and tech. Check out our picks below.

Biion Footwear
Biion is a newcomer on the golf apparel stage, and they’re bringing an innovative approach to the footwear market. Their shoes are made from EVA, a flexible, rubbery material that’s also waterproof, lightweight, and odor-resistant. Biion’s shoes are slightly futuristic-looking and a tad slipper-like, but because they’re cut into classic saddle-shoe or wingtip patterns, they’ll still blend in with your other course attire. Unless you don’t want to blend in—in which case the leopard-print or camouflage and orange styles are the perfect choice. $109.99, shop.biionfootwear.com.

Edel Hand-Crafted Repair Tool
When talented amateur Bryson DeChambeau burst on the scene earlier this year in Abu Dhabi, his choice of clubs—and the unique company that makes them—received a lot of attention. But Edel Golf has been around for years, quietly creating high-quality equipment that isn’t like anything else on the market. Snap up a little piece of the Edel magic for yourself with their repair tool, a classy combination of stainless steel, riveted copper, and Horween leather. $45, edelgolf.com.

Izzo Swami GT GPS and Game Tracker
At the beginning of 2015, this nifty packet of technology was an Editors’ Pick at the PGA Merchandise Show. In December, Izzo released the tool to the public. The GT is both a GPS and a game tracker. It comes with 14 tags to affix to your clubs, which monitor every shot. The Swami GT provides all kinds of helpful data, including average driving distance, putts per round, and recommendations for which club to hit next. $199.99, swamigps.com.