#AskAlan: Are fans unfairly critical of golf coverage on TV? 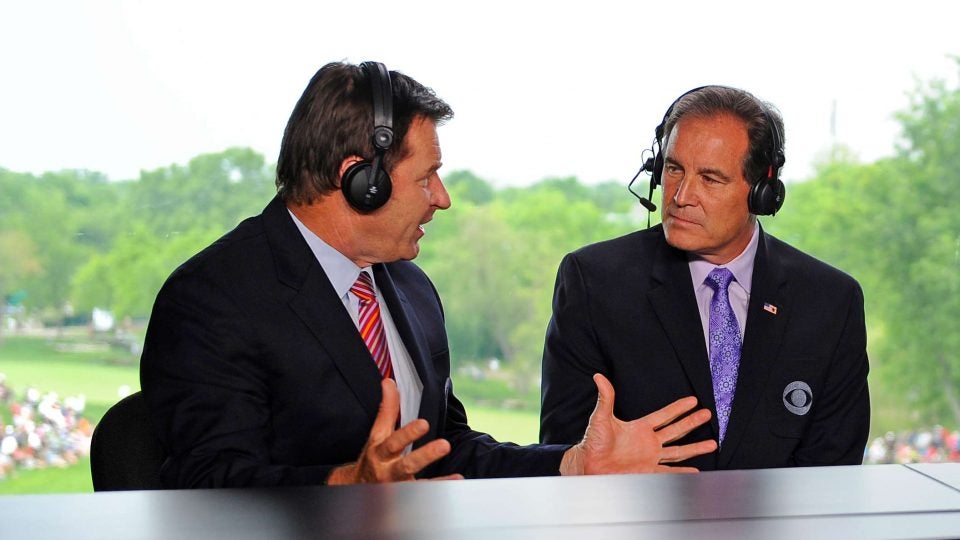 Nick Faldo, left, and Jim Nantz in the booth for CBS Sports.
getty

In this installment of the #AskAlan mailbag, GOLF senior writer Alan Shipnuck answers questions about TV golf coverage, a potential golf All-Star game, the lack of publicity for Joel Dahmen, Riveria’s chances of hosting a major, and much more.

Could the PGA Tour benefit from an All-Star Weekend? Top players by ranking and fan voting, various skills challenges, rookies and shooting stars round, All-Star round with ace/birdie/eagle opportunities on an easy course set-up. – @GoranBarnes

This would be great fun. The no-brainer time to do it is Players week, when the Tour is eager to showcase the players and prove it can be fun. The only institutional resistance I can see is that it might take away from the, ahem, gravitas of the event. But the PGA Championship is an actual major, and the early-week long-drive contest there has proven to be a hit. Why not expand upon this fan-friendly idea?

We almost had a Kang/Dahmen playoff at Riv. Where does that rank among the best current potential possibilities? – @WallDwarf

Fitness
How to spend only 10 minutes in the gym and get results, according to Joel Dahmen

What do you think we as a country can do to raise the level of Joel Dahmen awareness? Apparently neither CBS nor Adam Scott on 15 knew he was out there. – @hwgt9

I agree the dude is a breath of fresh air and deserves more coverage, though we’re doing our part at GOLF.com with this recent podcast. Given what we’ve heard lately from Peter Kostis, it’s easy to come up with a conspiracy theory that Dahmen is such a truth-teller the lords of Ponte Vedra Beach don’t want to give him a platform because he might, ya know, call out another pro for cheating or do something else that subverts the these-guys-are-gentlemen narrative. Here’s hoping Dahmen plays so well he can’t be ignored.

Scramble: Hunter, because I’m assuming he can still smash it. Four-Ball: Luke, because I need a steady partner. Top Golf: Duval, because he’s a good talker and there are nets to catch foul balls.

Q: Is network coverage of golf really that bad, or is the Twitterverse so insulated it’s much ado about nothing? What can be done to improve it?  – @kevin_demsky

The answer to the first question: both. There is no doubt the networks are failing to deliver a satisfying product. I hate to sound like an old fogey but some of this is generational. In the old days, TV golf was expected to be genteel, the perfect background to a mellow weekend afternoon. Ken Venturi was the perfect voice for this era, never saying anything of deep substance but lulling us into a pleasant nap with his dulcet tones. (Think IBF without the Aussie accent.) The media environment has changed massively in the past decade-plus, but golf coverage has remained pretty much the same. This is infuriating to millennials, who have grown up being able to curate their own non-stop content streams, and these youngish pundits are leading the charge in blasting the current golf coverage. Much of the criticism is warranted, clearly. In 2020, the coverage gap is inexcusable, especially when tournaments are getting decided in the darkness, as on Sunday at Riviera. At this point, you would expect that every fan at home should be able to watch every shot from every player. This will happen at this year’s Players, proving the technology exists; what’s missing is the will to give the fans what they want. The Tour needs to drastically rethink how its product is being presented, both on the traditional TV networks and through its own offerings. The endless criticism on Twitter has made this a much more urgent issue, and I salute the muckrakers who are going to force change.

All of this being said, criticizing the TV coverage has become as much of a sport as the golf itself. Sometimes on the weekend, I tune out from Twitter just so I can get lost in the golf and get away from all the shouting. After all, a man needs to nap occasionally!

#AskAlan, as you promised @GOLF_com has improved over the past year or so. As with any endeavor, always room for improvement. Any features on the horizon we can look forward to? – @Laz_Versalles

Thank you, sir, and I’m glad you’ve noticed. In the next month or two, we’re gonna roll out a bunch more improvements, but for now, I’m sworn to secrecy.

Given all the love for Riviera, and the challenges it presents to Tour players, why hasn’t it hosted more majors and why isn’t it ever in the discussion to host future majors? – @Tombagjr

Some of this is economic – the ’95 PGA Championship had famously sparse crowds, and that scared away the governing bodies. The 2023 U.S. at LACC will be an important test of whether golf fans in Tinseltown will turn out for a big-time event when the weather is warm and there are so many other things to do. The ’95 PGA was also not an artistic triumph – the greens were soft (and bumpy), and the pros torched the course. And then there is the membership composition at Riv. It’s become more corporate over the years, and there doesn’t seem to be a big push internally to host a major championship, which comes with a ton of hassles for the venue. Add it all up, and there just hasn’t been the will to bring another U.S. Open or PGA Championship to Hogan’s Alley. If LA North is a home run in ’23, as expected, it could become another West Coast anchor for the USGA. And with the PGA Championship now in May, do we want to play tournaments at Riviera twice in the span of three months? Obviously not, which would mean moving the L.A. Open to another venue for a year or two, and the Riviera folks love being one of the few splashy events on the L.A. sports calendar in February. So, while I agree Riv would be a sensational venue, I’m not sure we’re going to see another major championship there.

Is the 10th at Riviera a good, fair hole? – @MarVistaPete

It’s good, but it’s not fair, and I’m OK with that. It’s a misnomer to call it a drivable par-4 when it’s become more of a long par-3, as many Tour players no longer need a driver to get home. But the green has become so severe it repels many good shots. That’s not fair, but it’s wildly entertaining. The rest of Riviera is eminently playable so I love how this hole gets in the heads of so many players. It adds a lot to the drama and fan experience, even as the green has begun to cross the line into unfair. I’ll allow it.

You constantly hear, “He’s one of the greatest ballstrikers I’ve seen,” or “This really is a ballstriker’s golf course.” Can I just check, who is widely regarded as a poor ballstriker? I thought being a good ballstriker was kinda a prerequisite to being a professional golfer. – @golfbore1

This is also one of my pet peeves. Everyone on Tour can strike it, though there is obviously a range from pretty well to awe-inspiring. Riviera is the ultimate quote unquote ballstrikers’ course – but Brad Faxon (one of the weaker ballstrikers ever to prosper on Tour) holds a piece of the course record, thanks to a mile of putts he made that day. Easier, more open courses are not considered ballstrikers’ courses, but blasting drives over bunkers and knocking down flags will always be an advantage. So, let’s all collectively agree to banish this term from the language.