While the stars of the PGA Tour were facing a tough test at a beefed-up Quail Hollow in the first round of the 2017 PGA Championship, Tiger Woods took to Twitter to protest an Internet report about his dating life.

The article Woods took issue with appears to be a Daily Mail post published on Thursday entitled in part “EXCLUSIVE: Tiger Woods is seen for the first time with his stylist GIRLFRIEND.” The “girlfriend” the report references is 34-year-old personal stylist Kristin Smith. 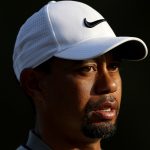 You may also like Legal analysis: Why Tiger’s DUI plea deal was a smart strategy — and what happens next

Woods tweeted to deny that he and Smith were dating, while also confirming they did have a relationship sometime last year.

Contrary to the false Daily Mail article, Kristin Smith and I are no longer dating and haven’t since last year.

The Daily Mail article includes photos purportedly taken of the two in the Bahamas recently.

The tweet comes one day after Woods’s attorneys pleaded not guilty on behalf of their client to a DUI charge stemming from Woods’s May arrest. The plea was part of a deal with prosecutors which reportedly will require Woods to enroll in a DUI diversion program.