Fairways, Greens and Drifts: When Will Boston Golf Again? 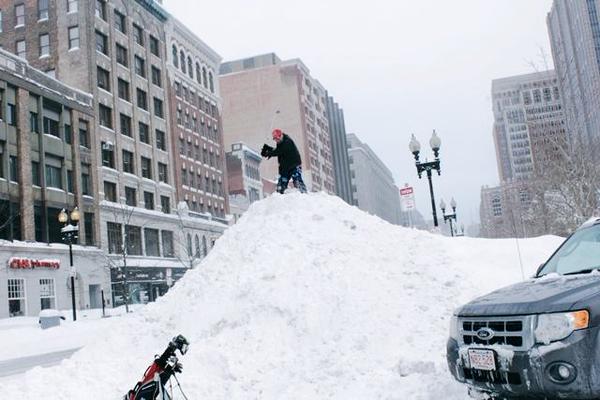 As most in the city hunkered down, images of the Boston Snow Golfer hit the Internet.
@LukeKerrDineen

There’s always more to every story than meets the eye, so when I started looking into one of the hottest sports business stories of the last five years, the ubiquitous Decline of Golf story, I shouldn’t have been surprised when someone mentioned a factor I hadn’t considered: cold, snowy winters.

“You have to take weather into consideration,” says Paul Metzler, senior director of research and global relations at the PGA of America. “In 2012 it was a banner year. You had people down in Florida leaving to go up to the Northeast and open up their golf courses and do their buying programs for merchandizing for February and March and April.

“Well, 2013 was bad for weather, and you look at all the [gloomy] reports from the first quarter of 2014 — the extreme weather we had, especially in the Northeast, really impacted sales.”

This brings us to 2015, which could be even worse, and the photo of the Boston Snow Golfer that made the rounds last week—a man swinging atop a mountain of plowed, frozen slag. Will they ever play again in Beantown?

Although the West is oddly warm and dry, with golfers getting out earlier than ever in typically snowbound places such as Idaho Falls, the Northeast has been beset with weather only a penguin could love, with yet more snow in the forecast this week. The Tour’s Florida swing, which begins at this week’s Honda Classic, never looked so good.

“I’ve never seen snow banks like I did when I was up there,” says James Driscoll, an eight-year Tour veteran who grew up playing Charles River Country Club and still has family and a home in Boston. “They’re head high, and parking is a disaster. From the looks of it, it doesn’t seem like they’ll be playing golf again until May at the earliest, but the crazy thing is they could have a freakishly warm April. You just never know.”

Driscoll is one of the fortunate ones. Although he keeps a condo on Boston’s Back Bay train line — with underground parking — he winters in Jupiter, Fla., and only goes to Boston this time of year to visit family. That’s what he was doing a few weeks ago when snow overload shut down the T, Boston’s commuter-rail service.

“It was insane,” says Driscoll, 37, who is playing the Web.com tour this year. “I had a bunch of errands to run, but my plans changed.”

Graham Nelson, one of my East Coast golfing friends, has no lifeline in Florida. He lives in the historic and hard-hit Charlestown section of Boston, from which he got a reprieve as he flew to L.A. on business last week. Nelson always tries to get a window seat, since one of the main corridors out of Logan Airport takes planes over the Country Club in Brookline, where he caddied as a kid. Just for fun he always tries to count all 18 holes as the plane flies overhead, but as he looked out last week, all he could make out was a formless mantle of white and gray, snow and ice.

“The joke that’s going around Boston is the courses will be tuned up in time for fall golf, so the season will be about a week or two,” Graham says. He knows short seasons, having played on the highly competitive club team at Colby College in Waterville, Maine, but what’s happening in Boston is record-breaking stuff, and it’s grim.

Before he left for L.A., Graham shoveled six feet of snow off his roof and wound up with the same aches and pains as if he’d played 36 holes on consecutive days. “But without any of the value of two days of golf,” he says with a resigned laugh. Like Driscoll and other Bostonians, Graham has found refuge on Cape Cod, where courses often open earlier than they do in Boston, if they close at all, but they’re in a deep freeze, too.

Hyannis Golf Course, Captains in Brewster, ancient Highland Links in Truro, where Graham and I have played on summer mornings — all buried. Amid this Boston winter (90 inches in 23 days, according to the Weather Channel) even the Cape could be unplayable for months.

“One of the dangers with all this snow is the roof getting too heavy and caving in, and a lot of that is the layers of ice under the snow,” Graham says. “There’s that really sad moment where you have to get your ice pick in the basement, and it’s lined up next to all your golf clubs, and you pick up a club and realize you won’t be using it for a long, long time.”