Expert predictions for the 2017 Masters at Augusta National

The Masters at Augusta National Golf Club is finally here, and there’s already plenty of intriguing storylines for the first major of the season. Who is your pick to win? [Ed. note: These picks were made prior to the news of Dustin Johnson injuring his back Wednesday night.]

Shane Bacon, golf analyst, Fox Sports (@shanebacon): I picked Phil to win before the season started and while my confidence dipped after his showing this weekend in Houston, I could still see Lefty pulling out some magic, and leaning on a revived putter, to get No. 4. I’ll say Rory and Paul Casey round out the top-three.

Sean Zak, associate editor, GOLF.com (@Sean_Zak): Remember a few weeks ago, down in Mexico, where ‘Uncle Phil’ Mickelson flew drive after drive into torturous landing zones? He was left of the fairway, right of the fairway, short of the green, beyond the grandstands, you name it. The guy put on an absolute clinic of scoring, eventually finishing T7. Yes, his driver is typically dubious as we turn to Augusta National, but his scoring ability remains top-notch. With any semblance of driving consistency (or driving luck, I suppose), he will play this course in under par. Four straight rounds of it and he could be looking at green jacket no. 4.

Josh Sens, contributing writer, GOLF (@JoshSens): I liked the Spaniard Jon Rahm before his recent streak of stellar play and I still do. A powerful player who seems comfortable in big moments. And like Seve and Olazabal before him, he’s got a clever short game and a flair for the dramatic that will serve him well at Augusta. 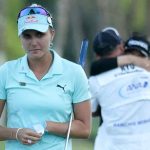 You may also like Tour Confidential: The latest rules controversy and previewing the Masters

Joe Passov, senior editor, GOLF (@joepassov): My man Hideki Matsuyama has cooled a bit. Dustin Johnson hasn’t. He’s super-hot, yet has paced himself perfectly, he’s won on every kind of course, he’s got the “major” monkey off his back and he’s (finally) shown he can play Augusta with a T6 in ’15 and a T4 in ’16. DJ will win the 2017 Masters.

Marika Washchyshyn, multimedia producer, GOLF.com (@Marika_AW): Rickie Fowler (although my heart says Adam Hadwin). With a win on Tour already in 2017, Fowler is just too darn close to that major win. Of his finishes this season, only three have been outside the top-10. His last Masters finishes: MC, T12, T5, but with the way he’s playing this year, don’t count on another missed cut. It’s unfortunate that he lost steam at the end of the Shell Houston Open, but I think that will only light a fire under him as he heads to Augusta.

Sean Steinemann, social media editor, GOLF.com (@SMSteinemann): Easy pick: Dustin Johnson. I’m just not sure he can be stopped at the moment. Sleeper pick: Hudson Swafford. I thought Swafford was set for a breakout year in 2016, but that didn’t quite happen. Turns out, I was a year off. Swafford has finished T10 and 6th in his last two starts and picked up his first PGA Tour win earlier this season at the CareerBuilder Challenge. He’s got the game, and name, worthy to slip on a green jacket.

Josh Berhow, staff producer, GOLF.com (@josh_berhow): I battled with this for a long time, but I finally came to the conclusion that Dustin Johnson is playing too well not to be picked. It’s annoying to pick the favorite, but coming off three straight wins — and with top 10s in his last two trips here — I can’t find a good enough reason to go with anyone else. (Sleeper: Paul Casey.)