European Tour: What You Missed at the M2M Russian Open 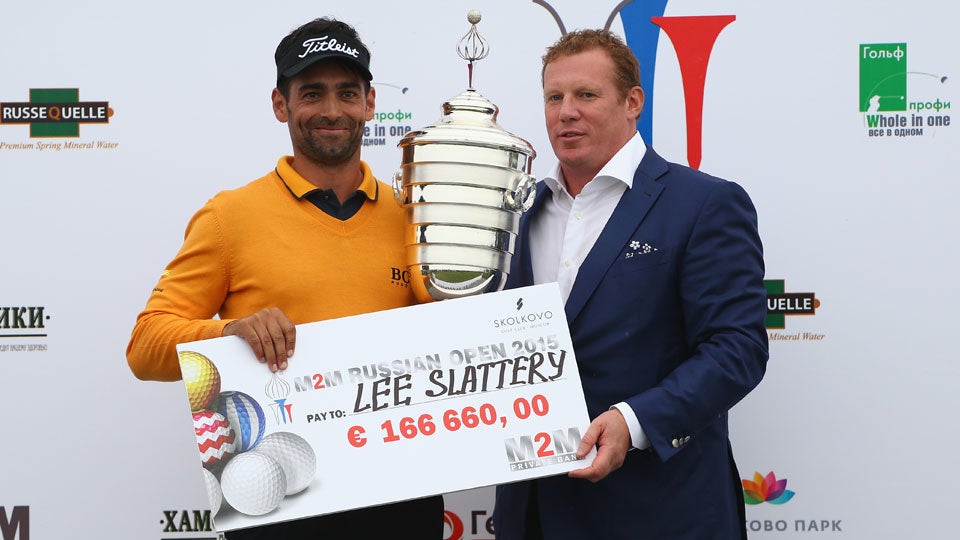 Lee Slattery of England is presented with the winner's trophy and cheque by Andrey Vdovin, Chairman of the Board of Directors M2M Private Bank, after winning the M2M Russian Open at Skolkovo Golf Club on September 6, 2015 in Moscow, Russia.
Getty Images

Lee Slattery of England held off the challenge of Argentina’s Estanislao Goya to win the M2M Russian Open at Skolkovo Golf Club in Moscow.

Slattery began the final round two clear of Goya and Scotland’s Craig Lee, and he extended his advantage immediately with a birdie on the 1st hole. But he gave that stroke back at the second and then dropped another at the 6th. Goya picked up shots with birdies at the 3rd and 6th holes and he took to the front.

David Horsey was third with a group of four players tied for fourth. Craig Lee carded a disappointing final round of 71 to drop back into a tie for eighth with Jake Roos of South Africa who fired a best of the week 63.

Four things we learned at the M2M Russian Open:

1 – Lee Slattery’s last (and only) victory on the European Tour prior to this week came in 2011 when he took the Madrid Masters. He had lost full playing rights for 2015 by finishing 111th in the 2014 Race to Dubai, so this win is significant. He now has an exemption until the end of 2016. It’s been a good year for English players on the European Tour. This was the eighth victory of 2015 by players from that country. Danny Willett, Andy Sullivan, James Morrison, Chris Wood and David Horsey are the other Englishmen to have enjoyed success.

RELATED: Andy Sullivan on How to Play in Crosswinds

2 – It was another good week for David Horsey. He’d been struggling on the 2015 circuit until two weeks ago when he took his fourth European Tour title at the Made in Denmark tournament. He won the Russian Open in 2014 and put on a solid defence of his title, finishing the week alone in third place. He’s now up into the top-50 on the Race to Dubai standings.

RELATED: An Interview with David Horsey

3 – It was mixed emotions for Estanislao Goya. He was, of course, disappointed to have come up just short of the victory and to have let it slip somewhat on the run for home. But he was also able to see the positives. To this point, 2015 had been a pretty terrible season for the Argentinian. He had won only just over €10,000 on the main circuit before picking up a cheque for €110,000 for this second place finish.

“After how I started the year, this tournament has given me a taste for it again,” he said.

4 – Goya wasn’t the only man celebrating a potentially season-changing result. All four of the players who finished in a tie for fourth scored (or equalled) their best results of 2015. Oskar Henningson of Sweden won the Moravia Silesia Open in 2009 but dropped off the radar after that – this tie for fourth is his best European Tour result in six years. James Heath picked up his biggest ever cheque for his share of fourth spot, Michael Hoey hadn’t managed better than tied fifth so far this year and Pablo Martin matched his fourth place finish in the South African Open.