European Tour: What To Watch For at the Scottish Open 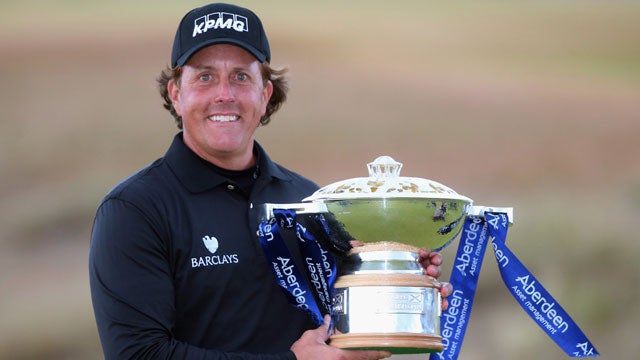 The European Tour is in East Lothian this week for the Aberdeen Asset Management Scottish Open at Gullane GC. The strongest field in the tournament’s history has assembled to do battle over the links.

World Number 1 Rory McIlroy was on the start sheet and should have been completing his final preparations for his defence of The Open Championship next week at St Andrews. But a total rupture of his left ankle during a football game has forced him to withdraw and he’s now doubtful for the year’s third Major.

Many of the world’s best players will tee it up at Gullane though, including defending champion Justin Rose and 2013 winner Phil Mickelson.

The Scottish Open was part of the original European Tour schedule back in 1972, but it wasn’t held for a number of years until resurrected in the 1980s. Since then the tournament has moved from Gleneagles to Carnoustie then Loch Lomond, Castle Stuart and then, last year, Royal Aberdeen.

This year the tournament will be contested over a composite course featuring 16 holes from Gullane’s No. 1 course and two from their No. 2 course. A number of new championship tees have been constructed to lengthen the layout to more than 7,100 yards.

Four things to watch for at the Aberdeen Asset Management Scottish Open: An increasing number of players from the USA are using this event as the perfect warm-up for The Open. Since the tournament moved to the links, it has been a far more appealing prospect for final preparation. 2013 Scottish Open and Open winner Phil Mickelson is on the start sheet again. So too are Rickie Fowler, Jimmy Walker, Matt Kuchar, Brooks Koepka and Ryan Palmer.

2 . Justin Rose will be looking to defend a title he won in some style at Royal Aberdeen last year.

On the Aberdeenshire coast, Rose posted four rounds in the 60s in testing conditions, to finish the tournament on 16-under-par. The Englishman was tied second at The Masters earlier this year and will be hoping this event will act as the perfect springboard going on to St Andrews.

Places will go to the leading three players (not otherwise exempt) who finish in the top 10 and ties. There could be some serious scrapping coming down the stretch on Sunday.

Five men came through 36-holes of qualifying at nearby North Berwick to earn their place in the field for this week. They are: Greig Hutcheon, Graham Fox, Craig Sutherland, Gareth Wright and young amateur Callum Hill. These are all guys who play on Scottish coastal courses on an almost weekly basis and have a great understanding of the vagaries of the weather, and how it will affect playing conditions. Look for at least one of them to feature on the leaderboards this week.