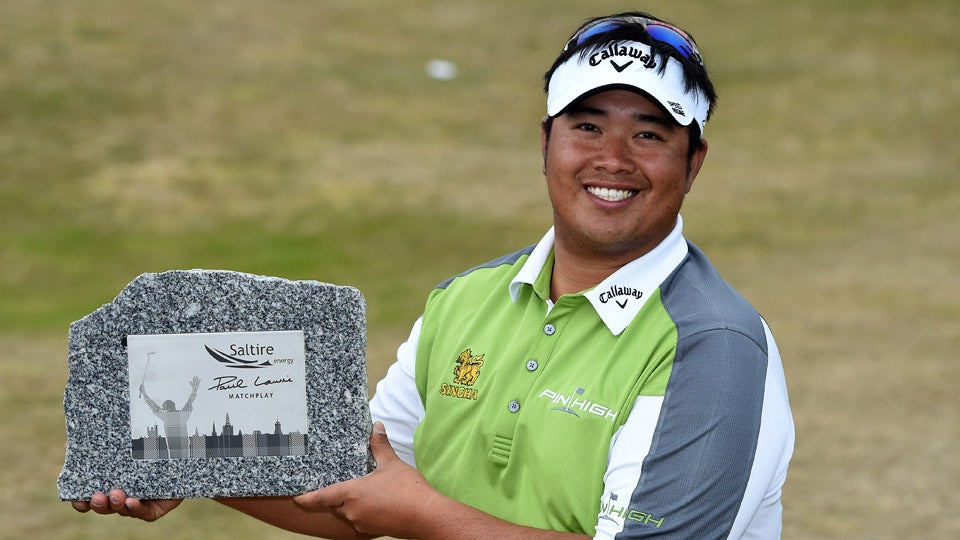 Kiradech Aphibarnrat of Thailand beat Sweden’s Robert Karlsson by one hole to win the inaugural Saltire Energy Paul Lawrie Match Play at Murcar Links in Aberdeen, Scotland. Aphibarnrat, who had defeated home player Marc Warren in the semifinal, held on to claim his first European Tour title outside of Asia.

In the 18-hole final, the Thai golfer looked to be cruising midway through the back nine when he moved 3 up after 14 holes. But Karlsson struck back, winning three on the spin from the 15th. That meant the pair came to the final hole all square, with the Swede carrying all of the momentum.

When Karlsson fired in a superb approach to the home hole, it looked as though he might have the beating of his younger opponent. But Aphibarnrat was up to the challenge and he played a magnificent second shot of his own to within four feet of the cup. After Karlsson had missed his birdie attempt, the 26-year-old rolled his home to take the victory.

1. Kiradech Aphibarnrat has climbed to 67th on the Official World Golf Ranking. Already with a victory this season on the European Tour, the Shenzhen International in China, he’s up to ninth place in the 2015 Race to Dubai. He came into this event with disappointing recent form on the European Tour—he had missed his last four cuts—so this win represented quite a turnaround.

“I didn’t have too high expectations this week but I just came here and tried to enjoy the whole experience of playing in Scotland,” he said. 2. Robert Karlsson also came into this event on a poor run of recent form. The veteran Swede had missed six straight cuts on the European Tour heading into this event and the former European Tour Number 1 was well outside the top 115 players who will retain playing rights for 2016. The 45-year-old picked up €116,500 for his second place finish and has climbed to 79th in the Race to Dubai. “This was much better than I expected coming in here,” he said.

3. In the third/fourth place playoff England’s David Howell snuck home ahead of Marc Warren of Scotland by a single hole. Both men have been enjoying excellent seasons with Warren currently 14th and Howell 17th in the Race to Dubai. Howell has twice played in the Ryder Cup and broke into the World’s top 10 last decade. He then went through a rough spell of form, but it looks as though the 40-year-old is now firmly out the other side.

4. The players enjoyed the opportunity to compete in match play and the spectators were treated to some thrilling contests. In the first round, no fewer than 15 of the 32 matches went to the 18th hole. This was the inaugural running of the Paul Lawrie Match Play but it’s immediate popularity means it’s sure to become a permanent fixture on the circuit.