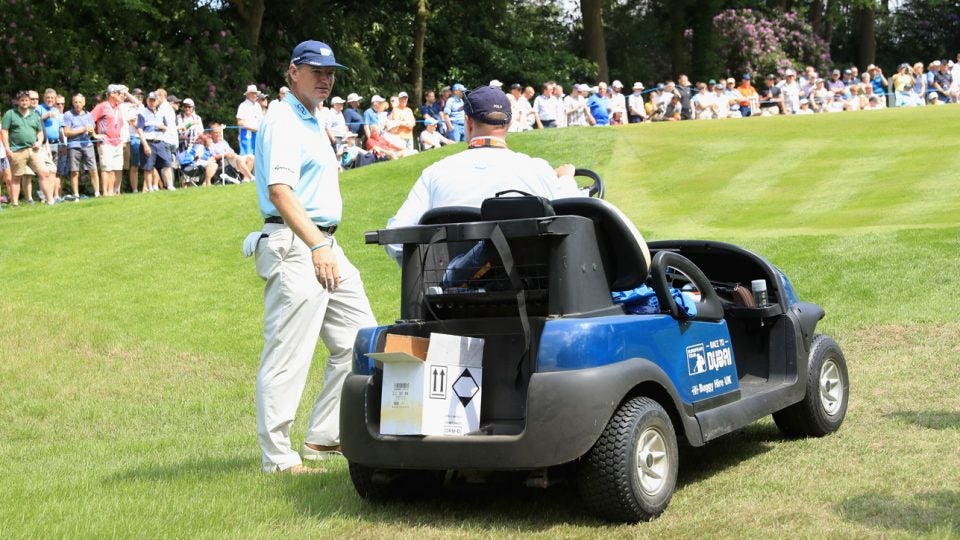 Ernie Els talks to rules official Simon Higginbottom on the 14th hole during day one of the BMW PGA Championship.
Getty Images

Ernie Els has always exuded an old-school vibe in his long career in professional golf, and that was on full display Thursday when he ruined his own great round by calling a two-shot penalty on himself.

Playing in the first round of the European tour’s BMW PGA Championship at Wentworth, Els hit his second shot on the par-5 12th hole into deep rough on the edge of a greenside bunker. Thinking the ball might be plugged, the Tour veteran alerted his playing partners, marked the lie, then picked up his ball to check. After replacing the ball, seemingly in accordance with the rules, Els chipped in for eagle.

But the decision didn’t sit well with the four-time major champion, and eventually he talked to a rules official, feeling he may given himself a better lie when he replaced his ball.

In the end, Els decided to penalize himself two strokes for playing from the wrong spot, a decision that turned his three-under 69 into a one-under 71 at the Euro circuit’s flagship event. The penalty leaves him five shots from the lead.

“I just felt uncomfortable by the way the ball came out. The ball came out way too good, so I felt I didn’t quite probably put it (back) exactly where I should have,” Els said after the round, adding, “I know deep down the ball wasn’t quite where it should be and I wouldn’t be able to live with myself.”