President Donald Trump has reportedly played 16 rounds of golf since taking office, but that’s not something the American people should be concerned about, according to son Eric Trump.

The president’s second-eldest son defended his father’s propensity to play the game in a lengthy interview in the Irish Independent, justifying his habit as a way to bond professionally with various heads of state, cabinet members and business persons.

“You can sit with somebody in a golf cart where there might be cultural differences and language barriers and have a good time and build a friendship in a way that you could never do sitting across an office table from someone,” Trump said, referring to the president’s Mar-a-Lago estate as his version of George W. Bush’s Crawford, Texas ranch. “If he can befriend people and find common respect, common ground and friendship – if you can have a good time together – then you are always going to see somebody in a very different light than you would with this kind of a relationship or a relationship over the phone, and that’s an immensely powerful tool.”

Another thing the president’s affinity for golf has fostered is a relationship with former World No. 1 Rory McIlroy. Trump says that the four-time major winner has become and remains a close friend of the family, despite the blowback he received from playing a round of golf with the newly elected president. Trump dismissed the backlash as an expected thing in politics, saying if he had played a round with Hillary Clinton, he would have received the same flack. 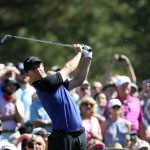 “Rory is an amazing guy,” Trump said. “He has been a great friend and… we have gotten to know him very, very, very well over the years. And, by the way, he has been an amazing ambassador for Irish golf and he has done a lot for charities in Ireland. He’s just a good guy.”

Trump believes that the golf course, whether his father is playing, hosting a meeting, or spending time with family, is where the 45th President of the United States feels most comfortable and can indulge in those softer moments. “I think it comes out around family,” Trump said. “I see my sister’s and brother’s kids jumping on golf carts with him – a process like this certainly makes you even closer. What was accomplished as a small collective was beyond anybody’s dreams.