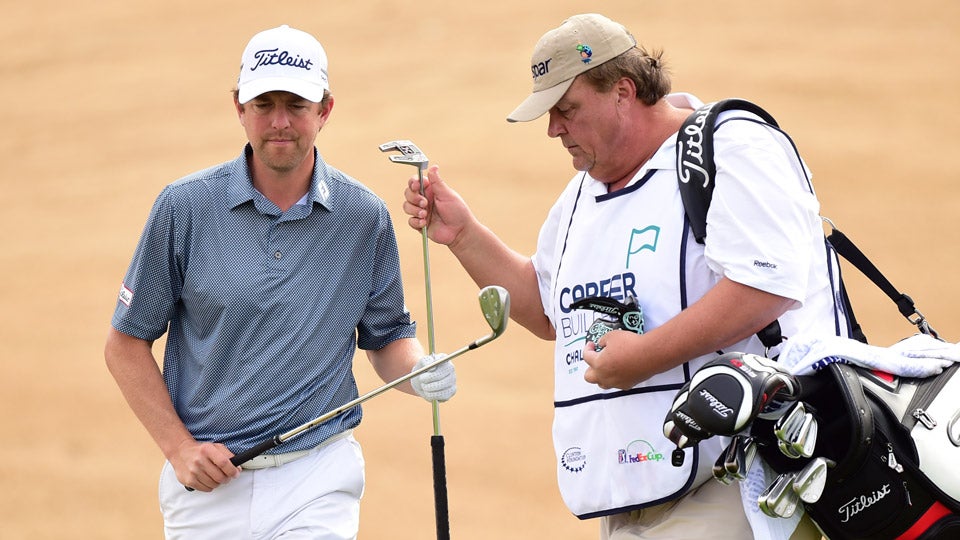 Caddie Eric Bajas, aka 'Big E,' hands Bryce Molder his putter during the CareerBuilder Challenge in January. Bajas, just like all the pros, is chasing his own number on the course.
Getty Images

PONTE VEDRA BEACH, Fla. — In golf lately we’ve been a little fast and loose with the word “big.”

When Jordan Spieth and then Jason Day rose to No. 1, they became, with Rory McIlroy, the Big Three. Rickie Fowler got hot and they became the Big Four. Top-ranked Day tied the course record with a 9-under 63 in the first round of the Players Championship at TPC Sawgrass on Thursday, the other three shot 72. Day looked like the Big One.

Bajas, aka “Big E,” is a mountain of a man, really — more than a match for fellow immovable obstructions Ernie Els (6-feet-3-inches, 210 pounds in your PGA Tour media guide), Dawie van der Walt (6-feet-5-inches, 260), or Kevin Kisner’s caddie, Duane Bock, whose boulder-sized calves inspired a fake Twitter account last year. Says Bajas, who lives in Toledo, Ohio, where he cares for his 89-year-old mother, “I don’t back down from anybody.”

He’s also on a diet. His boss, Tour veteran Bryce Molder, has offered to pay him a bonus tied to pounds lost.

“I joined a spa,” Bajas says, “and I texted Bryce last week, ‘Dude, I lost four and a half pounds,’ and he texted back and said, ‘That’s a start.’ Bryce has been really helpful.” You may not have heard of Bajas, but you’ve probably seen him. He used to carry Mark Calcavecchia’s bag, dwarfing the not waifish Calcavecchia. For the last eight years Bajas has worked for Molder, who fired a 2-under-par 70 at the Players on Thursday, when the temperature reached 83 degrees but bordered on stifling with the early absence of wind.

Yes, it did. After he had announced Molder and playing partners William McGirt and Colt Knost, and they’d hit and were well out of earshot, the 10th tee starter, wearing a linen blazer, told a friend, “I’m sweatin’ like a stuck pig.” Bajas, humping a 40-pound bag up ahead, made no mention of the conditions.

“I’ve heard a lot of guys complain if we happen to be somewhere hot,” Molder says. “In Malaysia, the caddies weren’t finishing. My guy has never complained. Ever.”

Bajas is 6-feet-3-inches, and 51 years old. Those facts are not in dispute. But he does not divulge his weight, which he carries capably on a sturdy pair of New Balance tennis shoes through the roughly 16,000 steps — Molder’s phone counts them — of an 18-hole round. Bajas hoists the bag with just a single strap, throwing it over his left shoulder. He rakes. He jokes with the marshals. He comes in for a read, as he did at the par-5 11th hole Thursday. Molder holed the birdie putt.

If you had to guess Bajas’s weight, well, good luck, and besides, he doesn’t care for that type of conjecture. He’s big. Isn’t that enough? He was only around 235 pounds when he attended Lake City Community College, now Florida Gateway College, an hour and a half from TPC Sawgrass. He dieted, lost weight, but gained it back and then some.

PHOTOS: The Most Stunning Island Greens

“Probably the funniest comment was at the Phoenix Open, and after Bryce’s shot we started walking,” Bajas says. “Some guy said, ‘Hey, Molder’s caddie, have a few more cheeseburgers.'” Funny? Well, not really. Bajas didn’t laugh. “You never forget a thing like that,” he says, adding quickly, “It goes in one ear and out the other.”

A 32-year veteran of the Tour caddie game, Bajas has one win with Molder, the 2011 Frys.com Open. They work well together, and sometimes play golf together. Although he didn’t try to hit the 17th green Wednesday like the other caddies — he is fighting a sinus infection — Bajas is sneaky good. He played golf for Lake City alongside teammate Jed Azinger, Paul’s brother, and against Jesper Parnevik. Bajas has taken money off his boss. (It was a closest-to-the-pin contest; fearing censure from the Tour, Molder won’t give details.)

A long time ago, at the S.P. Jermain Match Play in Toledo, Ohio, a young Bajas birdied eight of the first nine holes and thumped his highly favored opponent 9 and 8. “You know what got me pissed off?” he says. “I remember this guy had played in six U.S. Amateurs, and everybody came up to me and told me I had the toughest match-up, that I basically had no chance. That got me so hungry I said, ‘I’m going to beat this guy.'”

“A lot of guys know he’s got a sweet swing,” Molder says. “Two years ago on 17 [at the TPC Stadium Course] he hit it eight or nine feet.”

Bajas laughs. “All the shots I hit with him, I hit good.”

Alas, with Big E the focus will continue to be on weight, not weight shift or grip or his other fundamentals.

MORE: How Weekend Hackers Play the Par-3 17th at Sawgrass

“Knowing when to eat, what things can get you in trouble — I don’t know all of that, but I help out as much as I can,” Molder says. “Out here the hardest thing is to get your nutrients in so that you don’t just eat crap. Also, we have a week on, a week off, and your body’s not quite sure what to make of it. A day out here, you take 16,000 steps, but on a travel day you take like 3,000 and all you’re doing is sitting around eating.”

“I told him I need to lose weight,” Bajas says. “I’m 51 and it’s not going to get any easier to walk these golf courses. Reno is probably the worst because of the walk and the altitude.”

It wasn’t a formal affair, but Bajas’s first weigh-in was at the Houston Open, the week before the Masters. “I said, ‘I don’t need to know the number. I trust you,'” Molder says. “There’s a number that we’re trying to lose by the start of next season.”

And so while Molder is out chasing his number, Bajas is chasing his, doing one of the best things he can do for himself: walking. Each man is trying to go lower in his own way, each while helping the other, with the tournament scoreboards telling only half the story.