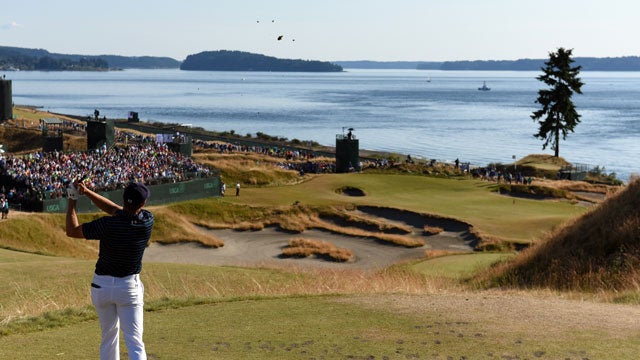 Jordan Spieth watches his tee shot on the 15th hole during the final round of the 115th U.S. Open Championship at Chambers Bay on June 21, 2015.
Getty Images

Despite not flying across the pond early in preparation for the British Open, Jordan Spieth has still managed to get a few looks at St. Andrews ahead of time—just not in the traditional sense.

During his time off after the U.S. Open at Chambers Bay, Spieth played a few holes at St. Andrews on a Full Swing Golf simulator he owns in his home in Dallas.

“I made the fairways and greens firm and I was able to kind of see some of the lines off the tee,” said Spieth, during an interview with the Golf Channel. “Obviously it’s not the same as being there. But at least I get to see some of the holes so when I get there I’m not too surprised.”

Spieth’s admirable decision to honor his commitment to the John Deere Classic—a tournament that gave him a sponsor’s exemption as an amateur and that he won in 2013 for his first PGA Tour victory—has been questioned by many who believe he should be in the field at the Scottish Open this week for more localized preparation. He is, after all, chasing a feat that has never been accomplished—winning all four majors during a Tour season.

You may also like 2015 British Open Odds: Spieth, Johnson Favorites at St. Andrews

“The best prep for me is getting myself into contention the week before,” said Spieth, who has played St. Andrews only once. “That’s what we did at Augusta—second place in San Antonio and Houston, but I had a chance to win, and finally capitalized with everything firing at Augusta. The Memorial—I was in contention there before the U.S. Open.

“I’ve got an important week [this week] where I want to get my game right, get everything firing on all cylinders and then adjust to the conditions at St. Andrews.”