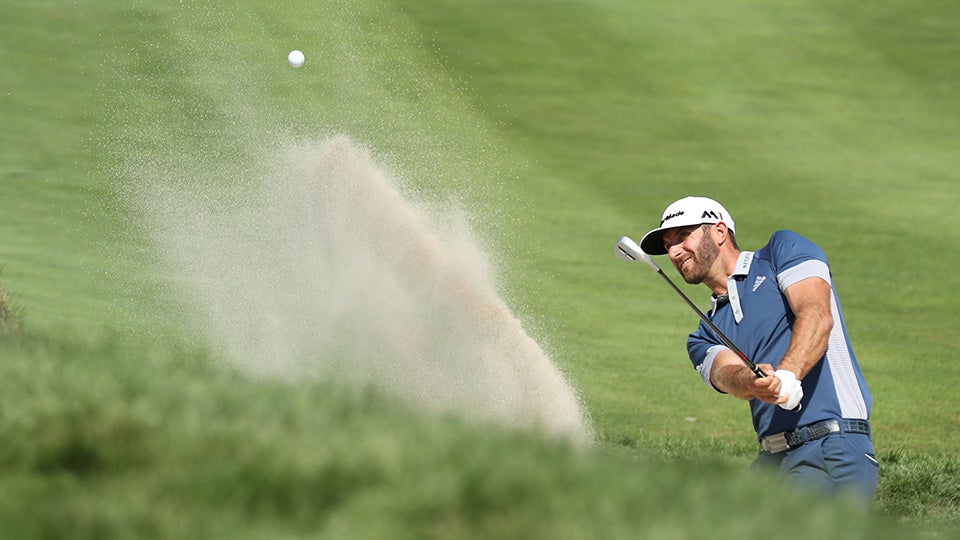 DJ improved his performance from greenside bunkers by 0.2 strokes per round, finding the putting surface with 91 percent of his shots.
David Cannon

Dustin Johnson had a breakout season in 2016, rocketing from No. 8 to No. 2 in the world—along the way winning three times (including his first major) and a bucketful of money. Statistically, his triumph is the tale of two Dustins: the DJ whose 2.0 strokes-per-round advantage over the field in 2015 proved his burgeoning greatness, and the DJ who, in 2016, achieved something incredibly difficult by raising his formidable game even higher.

The popular narrative is that Johnson dominated in 2016 by bombing his drives, which left him with wedges into greens; then his improved wedge play got him closer to the hole, yielding a load of birdies. But this story is only partially true. In fact, while his driving average (301.5 yards) was an impressive 20 yards longer than the field’s, it was two yards shorter than his typical blast in 2015. In 2013, he was a below-average wedge player from 100 to 150 yards (135th in Strokes Gained) and is now significantly better (12th), but much of that improvement came between 2013 and 2015, not in 2016.

No, Dustin’s Player of the Year feat—which included adding a remarkable full half stroke to his already-bruising strokes-per-round advantage—resulted from other more unexpected and incremental changes. Let’s break them down, with some helpful insight from one of his coaches, Claude Harmon III.

From 2015 to 2016, DJ’s putting improved by 0.2 strokes per round, with almost all of this gain from putts starting within six feet of the hole. In 2015, he sunk 85 percent of his putts between three and six feet; in 2016 he sunk 88 percent. Doesn’t sound like much of a difference, right? Wrong. This past season, he had almost seven putts per round in the three-to-six-foot range, so his 3 percent improvement in make-percentage gained him 0.2 strokes per round (.03 x 7). DJ’s rank in Strokes Gained from inside six feet went from 109th in 2015 to 26th in 2016.

Claude Harmon III remembers the putting turning point: “At Augusta, DJ missed three short eagle putts. He became tentative on short putts and tended to wipe at them, resulting in a loss of speed. We worked on staying aggressive on the short ones, thinking of trying to make putts instead of trying not to miss them. When he keeps his speed up, he makes a lot of the short ones.”

Harmon: “We worked hard on his greenside bunker play this year. Dustin had been leaning the shaft too far forward at impact, like he does with his irons. We wanted him to feel the clubhead get to the ball before the hands, so that his shaft would be more vertical at impact in order to better use the bounce on the club. A great example was hole 10 on Saturday at the Tour Championship. DJ’s approach shot found the bunker 86 feet from the pin, and he stuffed the shot to within a foot to save par.” In 2016, he was 20 yards longer than the Tour average, while hitting just 0.3 fewer fairways per round. That’s long and straight— and it’s why he gained more than one stroke per round on the field (the most in his career, and ranked second last year behind Rory McIlroy). Compared with 2015, DJ improved his driving by about 0.1 strokes per round, mainly by hitting 0.7 percent more fairways per round. How did he sharpen his accuracy? He hit more fades and curved his drives less, from an average of 59 feet in 2015 to 43 feet in 2016. (The Tour’s most parabolic magician is, no surprise, Bubba Watson, whose typical drive bends 61 feet— or nearly twice the Tour average of 31 feet.)

Harmon: “Last season, DJ’s bad drives happened when he swung too slowly and tried to steer the ball, sometimes resulting in a block to the right or a hook. We found that by playing a fade, he could aim left and swing hard at the ball. The harder he swung, the straighter it would go. Just look at how consistent his driving was down the stretch at the U.S. Open and the BMW Championship.”

In the 2016 PGA Tour season, Johnson had the longest streak—12 in a row—of driving the ball 320+ yards on consecutive par 5s. His clubhead and ball speed helped. Here’s how his swing stacked up.

Harmon: “DJ didn’t used to like practicing with his wedges, because he wasn’t good at those shots and he’s not a “drills” guy. TrackMan really helped get him engaged in wedge practice. Now, before each round, he spends 45 to 60 minutes using TrackMan to dial in his distances with his half, three-quarters and full swings with his wedges. Before, he would hit a 60-degree wedge hard, and now he usually finds it better to hit an easy 54-degree wedge.”

Before the 2016 season, Dustin Johnson was one of the best players in the world. From such heights, improving play by a half-stroke per round is extraordinarily difficult, but that’s just what he did last year. He made fractional gains in many facets of his game—and, in doing so, he turned that half-stroke gain into an extra $4 million in Tour loot in 2016.

DJ has ranked in the top 10 in Strokes Gained driving in six of the past seven years, largely due to his prodigious length. Add to that better putting from zero to six feet, incremental gains in his wedge game (the importance of which can’t be overstated), and increased driving accuracy. The result? The ferocious combination of power and finesse that’s the difference between Dustin Johnson, great player, and Dustin Johnson, GOLF’s Player of the Year.