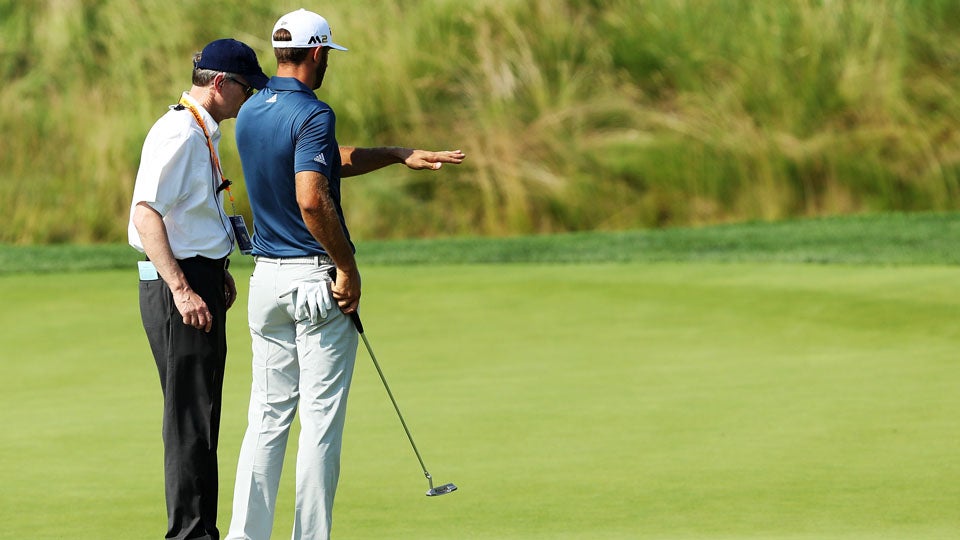 Dustin Johnson talks with a rules official on the 5th green during the final round of the U.S. Open at Oakmont Country Club.
Getty Images

OAKMONT, Pa. — When Dustin Johnson’s ball moved on the 5th green during his final round of the U.S. Open, he stopped and made sure he interpreted the ruling correctly.

More than an hour later, the USGA informed Johnson it was unsure if he should be penalized a stroke under the idea that he had forced the ball to move. The USGA notified Johnson that the action on the 5th green would be reviewed and ruled upon at the end of his round.

Naturally, this move by the USGA garnered plenty of attention, specifically from PGA Tour players. Rory McIlroy was one of the first to sound off, followed by many others, including former U.S. Open champions Jordan Spieth and Webb Simpson.

Some great golf by @DJohnsonPGA all week, strong way to finish overcoming that rules farce. Happy Father’s Day to DJ and all of you.

This is ridiculous… No penalty whatsoever for DJ. Let the guy play without this crap in his head. Amateur hour from @USGA

This isn’t right for anyone on that golf course. If it was me I wouldn’t hit another shot until this farce was rectified.

No way DJ gets a penalty. Use some common sense @usga The greens are running 14 and are sloppier than Mount Everest

Hey @usopengolf @USGA do not make the mistake of penalizing Dustin, he did NOTHING to cause ball to move.

That rule HAS TO change @USGA, PLEASE!

Lemme get this straight.. DJ doesn’t address it. It’s ruled that he didn’t cause it to move. Now you tell him he may have? Now? This a joke?

.@JordanSpieth @McIlroyRory w/ you boys! The fact that the @usga thinks that DJ caused the ball to move is completely ridiculous! Laughable!

These are the guys who make our rules? #scary

This entire thing with DJ is absolutely unreal. Hope he wins by 8.

USGA ” is there some other reason that the ball moved”. Yep..gravity. #itkeepsusonearth

.@usopengolf @usga I had the exact same thing happen to me on 13 and I was not near the ball. The ball can move on this greens

Hey @USGA, it’s impossible for DJ to cause the ball to move backwards!!!!!!! #commonsense

What is the USGA up to? Are they trying to say DJ is lying about what happened and now they think he should be hit with penalty. Not funny

The @USGA are creating an incredibly anti-climatic scenario here during what should be an incredibly dramatic back nine on Sunday. Sort it.

So you’re gonna tell a guy w/o a major that’s leading that he may not be leading after one of your white hairs already cleared him @USGA?!?

This is a perfect example of the rules doing disservice to the game. DJ didn’t do anything to gain advantage. Shouldn’t even be a discussion