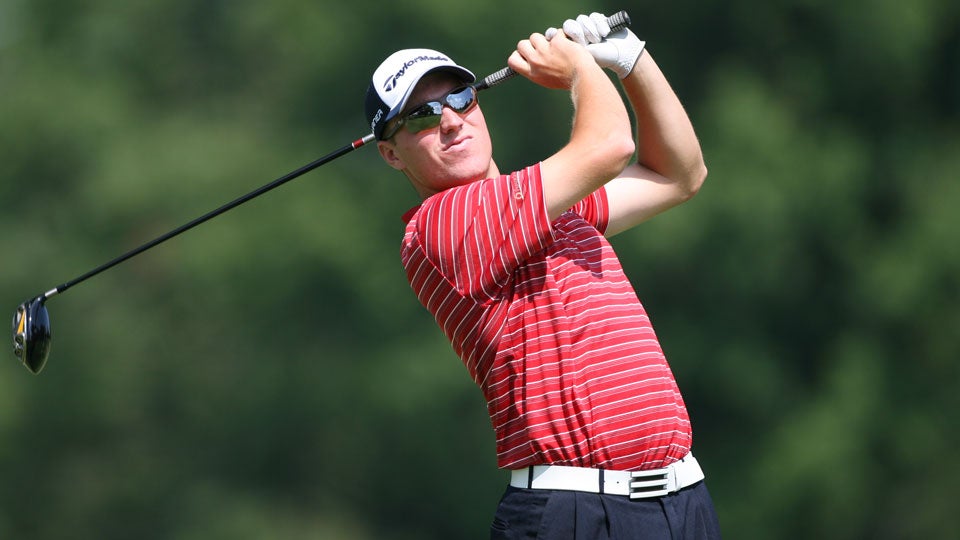 Mike Van Sickle is headed to the final stage of Web.com qualifying for the second consecutive year.
Getty Images

BROOKSVILLE, Fla. — The hard truth of the Web.com Tour’s second stage of qualifying is that if you don’t make it, you’ve got nothing.

If you do make it, you’ve still got nothing … but at least you’ve got a chance at something.

The non-qualifiers leave with no status anywhere while the 22 qualifiers earn some kind of Web.com status. How much status and how many tournaments that gets them into will be determined next month in the final stage of qualifying at PGA National, site of the Honda Classic, in Palm Beach Gardens, Fla.

Twenty-two players from the field of 76 shot 8 under or better to advance to final stage.

Murray, from Raleigh, N.C., breezed through the final round, if that’s even possible, thanks to a good start. He birdied four of the first seven holes, and was three under through four with two birdies from inside two feet. He let a few shots slip on the back nine but he’d already built a nice margin of comfort.

He also had a Hall of Famer of his bag — Mike Hicks, the guy that Payne Stewart hugged after he made the putt at Pinehurst to win the 1999 U.S. Open. Hicks, who looks as fit and young as ever except for the graying hair, had a long career as a highly respected caddie on the PGA Tour but is mostly retired. His last PGA Tour caddie gig was in May of 2014.

“I do miss the tournament rounds but I don’t miss the travel and all the stuff that goes with it,” Hicks said. “I’ve seen enough hotel rooms, and I was never by myself, I always had to share with somebody.”

Hicks was back in a familiar position this week because he’s known Murray since the days he played junior golf with Hick’s son, Jacob.

“I think I played with Jacob in his first tournament when we were 8,” Murray said.

Hicks hadn’t planned on caddying but Murray’s father asked him to take the bag for the first stage. Now Hicks and Murray are headed to final stage.

Caddying for Murray, I told Hicks, is probably a lot like riding Secretariat — not a lot for a jockey to do.

“[He] is easy,” Hicks said. “Just give him the numbers and stay out of the way.”

Murray said it’s a big help to have a veteran on the bag, someone you don’t even think about questioning.

“It’s nice to focus in on the numbers and not worry about anything else,” Murray said. “Versus having a caddie who’s your buddy — then you have to do a little more work. I was pretty relaxed all day today. I did kind of make a mistake on the 15th hole.

The 15th hole is a short par 4 that curves right but the fairway is peppered with raised bunkers and Murray hit driver and put one up against the lip of one right in the middle of the fairway. He made bogey.

Mike Van Sickle rallied from a shaky start, when he bogeyed the opening hole, which was a potential birdie hole downwind. He rolled in a long birdie putt on the second green and got to two under par for the day when he landed a big tee ball on the green on the ninth hole, a 330-yard uphill par 4. He narrowly missed a 15-footer for eagle and settled for birdie.

After a bogey at the 11th, he birdied the 15th, then two-putted from six feet for birdie on the long par-5 16th hole, and parred in.

This is the second consecutive year he’s made it to the final stage. Last year, he finished around 95th, which wasn’t good enough to get him a Web.com event all season. When Monday qualifying didn’t work out, he ended up playing most of the summer on the Mackenzie Tour in Canada.

“I’m just glad to make it to final stage,” Van Sickle said later at Applebees after polishing off an appetizer of pretzel bread and cheese. “It would’ve been nice to have a better putting week and be able to enjoy the walk the last day instead of grinding. It’s not how you get there, though, it’s about getting there.”