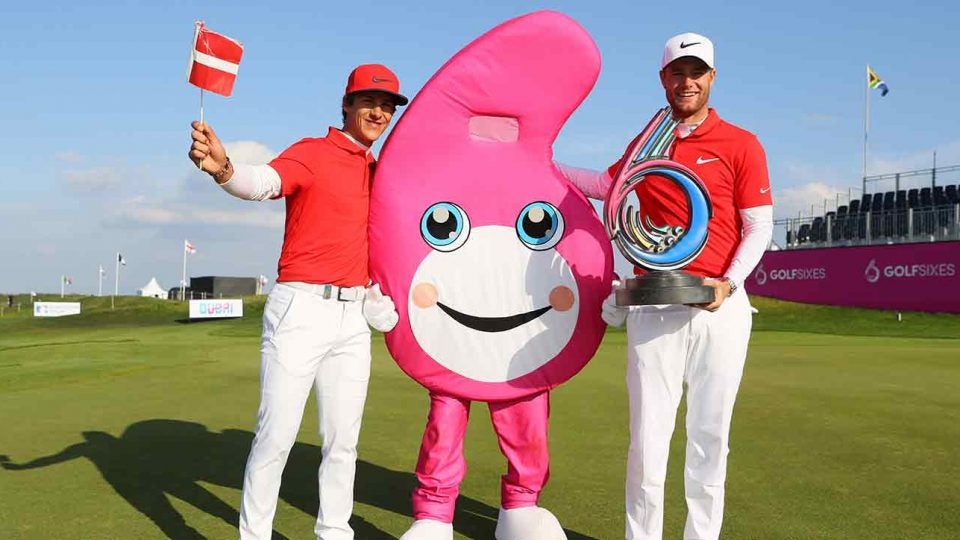 Thorbjorn Olesen and Lucas Bjerregaard of Denmark pose with the trophy and the GolfSixes mascot after winning the final match between Denmark and Australia during Day 2 of GolfSixes at The Centurion Club Sunday.
Getty Images

Victories over France in the quarterfinals and Italy in the semifinals earned the Danes a place in the title match at the Centurion Club in southern England, and Olesen and Bjerregaard won the last three holes for a 3-1 victory.

Seeking to broaden the appeal of golf, the European Tour was experimenting with GolfSixes, which featured walk-out music on the first tee, long-drive competitions, pyrotechnics and shot clocks. A pink mascot followed teams around the course.

“I wouldn’t mind a few events a year like this, especially if I have Thorbjorn as a partner,” Bjerregaard said. “I could see it really taking off, no doubt.

“I think the fact that it only takes an hour and 10 or 15 minutes to play could make for good TV and people are not out here for necessarily seven hours to watch a round of golf.”

Australia reached the final by beating Thailand and then Scotland in the knockout stages on Sunday.