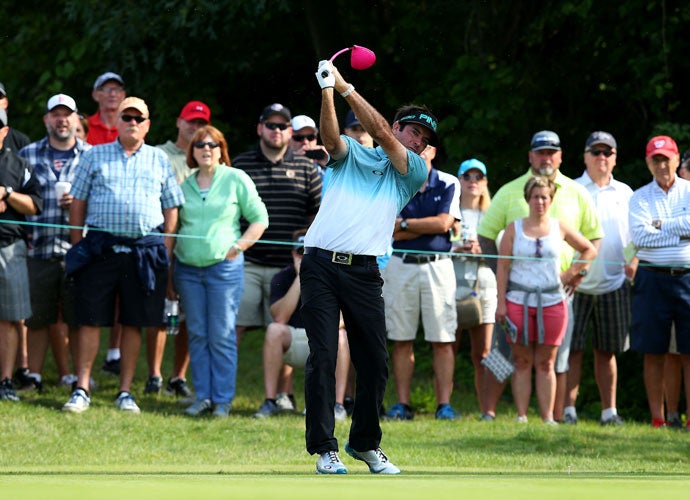 Bubba Watson signs autographs at Kapalua during the pro-am at the Tournament of Champions.
Icon Sportswire

KAPALUA, Hawaii (AP) Bubba Watson already has achieved more than he ever imagined. Two green jackets from the Masters. A World Golf Championship title in Shanghai. Six victories on the PGA Tour. And now he has raised the bar on what he hopes to accomplish before he’s finished.

It doesn’t sound like much, not compared with 79 wins by Tiger Woods, or Sam Snead’s record of 82. Not even compared with 20 wins by Davis Love III.

”The global game makes it harder to win,” Watson said after winning the HSBC Champions. ”Ten wins for me personally, and any young player, that’s the first goal. Because that number 10, we don’t talk about it enough. Everybody in the field is so talented.”

There was a time when 10 victories was good, but not even close to great.

The PGA Tour awards a lifetime exemption for 20 wins. Four active players on the PGA Tour have at least 20 victories – Woods, Phil Mickelson (42), Vijay Singh (34) and Love. But there are 33 others from previous eras who are in the 20-win club.

”I think if you get to double digits,” Hunter Mahan. ”How many guys have that?”

It’s not that long of a list. Ernie Els has 19 and Jim Furyk has 16. David Toms and David Duval are at 13 as they wind down their careers. Steve Stricker and Justin Leonard are at 12, while Zach Johnson and Adam Scott have won 11 times.

Rory McIlroy has nine wins on the PGA Tour, all against the strongest fields. Projections for Boy Wonder are higher, and they should be. He’s special, one of those players who come along every other generation or so.

As for the rest of them?

Maybe there’s too much money in golf – 50 players earned more money in 2014 than Arnold Palmer did in his career – and it lessens the motivation to win. There was a time not long ago when it was harder to win because Woods wasn’t leaving much for anyone else.

The more reasonable explanation is that these guys really are good. And there are more of them than ever before.

”It’s hard to see a 40-time winner on tour now, isn’t it?” said Geoff Ogilvy, who has eight career wins. ”As good as (Jordan) Spieth is, 40 times! That’s two times a year for 20 years. So there’s less of that. The golf is better. But the winning, the piling up wins, there’s less of that.”

Fred Couples was inducted into the World Golf Hall of Fame with only 15 wins and one major. Mark O’Meara will be inducted this summer with a slightly better record – 16 wins and two majors. Can Furyk be that far behind with his 16 victories and U.S. Open title? And while money is not a great measure with inflation and TV money, Furyk’s $60 million in career money trails only Woods, Mickelson and Singh.

Maybe there’s a reason some administrator at the PGA Tour set the bar at 20 wins for a lifetime exemption. Except for the truly great ones, that club doesn’t figure to get much larger. Love was the last player to get his 20th victory at age 44.

Matt Kuchar is fond of saying that no tour has ever held back a great player, and that principle applies. The great ones will accomplish exceedingly more, whether their names are Nicklaus or Palmer, Hogan or Snead, Trevino or Casper. Woods picked up his 20th career win in the U.S. Open at Pebble Beach when he was 24. Mickelson was 31 when he won for the 20th time at the Bob Hope Classic two years later. Those two are elite.

The definition of great, however, is getting blurry.

”What’s great in our generation? It’s hard to say,” Kuchar said. ”It’s a classic argument, and I’m not sure there is a right answer. … We’re really judged on majors, but 20 wins, the lifetime deal would be a cool feather in the cap.”

Johnson doesn’t get enough credit to have won 11 times (including the Masters) even though he lacks the kind of power that defines the modern generation. Leonard was like that a decade earlier. Asked what he would call a good career, Johnson lowered the bar to four or five victories.

”Just because it’s so hard,” he said. ”There are some guys who won last year I haven’t even met.”

Someone will add to that total at the Hyundai Tournament of Champions this week. Johnson has the most victories of anyone in the field. Watson could win and bump his total to seven career wins, inching closer to his goal – or at least his next goal.