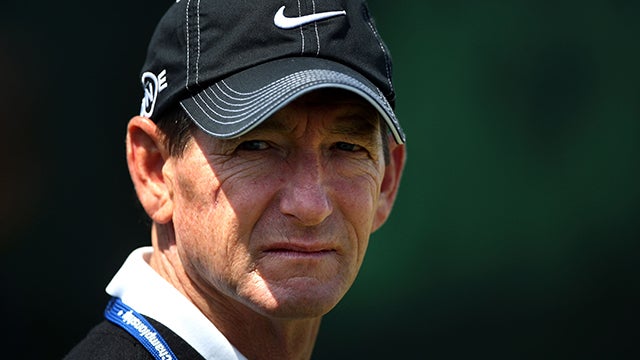 The eminent instructor, 60, sounds off on his all-time favorite student (and his most problematic), Tiger’s chances at a comeback and his retirement from working with Tour pros.

That other people’s successes are not only good for them but they’re good for you because they show you the way. Steve Wynn told me that. He was a student of mine.

Do you have a favorite student?

Mark O’Meara. He was the first touring pro I ever helped, he was a student of mine for 25 years, and he went on to make it to the Hall of Fame. When he won two majors and PGA Tour Player of the Year in 1998, that was my most special year of teaching, that’s for sure. Mark O’Meara was the one who got me started. If it weren’t for him, you would have never heard of Hank Haney.

When did you realize you could make a living teaching golf?

If you weren’t a golf teacher, what do you think you’d be doing?

I’d be teaching something else. Golf just happens to be my subject. That’s what I know the most about. But I really feel that I could coach or teach anything.

Are you a sports memorabilia collector? Anything cool hanging on the wall?

Well, Charles Barkley is my man. He was on my show, The Haney Project, and I got something from a lot of the guys I’ve helped. My Barkley jersey is up there.

You’ve taught some of the best players in the world. Where do you go from here as a coach?

So if Jordan Spieth called, you wouldn’t be tempted?

[Laughs] Jordan Spieth is doing great just how he’s doing. He shouldn’t mess with anything. He’s got a great coach in Cameron McCormick, he’s got a phenomenal attitude and he’s the best putter in the world, so he just needs to keep doing what he’s doing.

What should we expect from Tiger in 2016 and beyond?

I don’t know if anyone has ever played the PGA Tour after three back operations. I’m sure Tiger will say he is going to do everything he can to come back, and I’m sure he will try, but anyway you look at it, the odds aren’t great of seeing him return to a level even close to where he was.

If you were still his coach, what would you tell him?

My advice would be to stay away until your game is 100% and your body is 100%. If that never happens, you’ve had a great career, and what do you have to apologize for? When he’s less than 100%, it’s hard to watch.

What will be Tiger’s biggest challenge going forward?

I always go back to Ben Hogan’s statement. He said, “The first 500 balls you hit today get you back to where you were yesterday.” If you do the math, you can see how far that puts him behind over the last few years, whenever he stopped practicing so hard. Now you have to climb up that mountain. I don’t know how you get there. When’s he gonna play? When’s he gonna practice? He didn’t play that much last year, and it’s just setting him back further and further.

Does it get old being asked to analyze Tiger’s swing?

I don’t mind at all. That was a great part of my career. I’m honored to be able to speak somewhat as an expert on the topic. I would love to see him break Jack’s record. I would love to be in a small way part of that historic moment.

Is Jack’s record officially out of Tiger’s reach?

Who’s been your worst student?

They’re all just students. Some are easier than others, some are harder than others, but at the end of the day, they’re all just students, so I’ve really never looked at it like that. I have [colleagues who] bring me students and say, “I’d like you to take a look at this one guy.” And I always know that the guy is the toughest, hardest, most complicated student they have, because they never bring me their easy ones. But they’re all fun, they’re all a challenge, and that’s why I love it. Charles was obviously very challenging. He’s my lifelong project.

So there’s hope for Charles yet?

There’s hope for everybody.