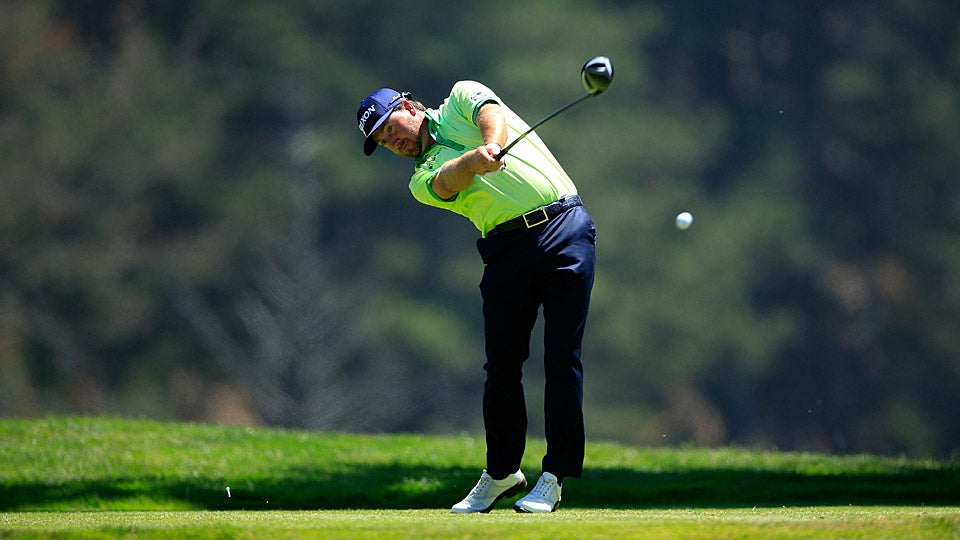 Graeme McDowell will be forced to play a match on Friday despite having zero chance of advancing to the next round.
Getty Images

SAN FRANCISCO — Shane Lowry had just shot 2 under and lost, his par out of the greenside trap at the last not good enough to match Rickie Fowler’s two-putt 4 in the second round of the WGC-Cadillac Match Play Championship at TPC Harding Park on Thursday.

Lowry flung his club onto his bag.

“Robbery,” he said to no one in particular.

Then came the really bad news. Lowry had not only lost his match to fall to 1-1 in Pool 13, but due to the vagaries of the new format, he no longer had a chance to advance out of pool play and into the weekend matches.

Graeme McDowell’s caddie, Ken Comboy, tried to find the humor in it as he told Lowry outside the locker room that he and G-Mac would also be playing their respective matches Friday with no mathematical hope of advancing. But Lowry was in no mood to laugh.

“Some format this is,” he said to Comboy.

Lowry declined a request to be interviewed.

No one knew what to expect when the Tour announced it would reimagine this tournament, abandoning the one-and-done aspect that had defined it in the past. Could a player really now lose a match and yet still advance into the weekend? Mathematically, yes. But the realities of the new format began to hit home Thursday with players, caddies, reporters and fans feverishly working scenarios and trying to get the math straight.

“Looking forward to playing McIlroy tomorrow,” said Horschel, who made four birdies and beat Jason Dufner 3 and 2. “The No. 1 player in the world, and we’ll see what happens. Obviously we have a track record against each other, and it seems like when we play against each other we play our best. So I would expect a very well-played match tomorrow.”

McIlroy made four birdies and no bogeys in beating Brandt Snedeker.

Who is losing? Keegan Bradley, Miguel Angel Jimenez, Russell Henley, Adam Scott, McDowell, Victor Dubuisson, Alexander Levy, Ian Poulter, Jimmy Walker, Dufner and Snedeker were among those who fell to 0-2 and were mathematically eliminated from playing on into the weekend. They will play their third and final match Friday only to determine prize money and FedEx Cup points.

Among the other questions that have already been answered so far at Harding Park is whether a player can lose a match and still get to the weekend.

In Pool 5, Thongchai Jaidee beat Jim Furyk 3 and 1 Thursday, and George Coetzee defeated Martin Kaymer in 19 holes, leaving all four men 1-1. That means someone from that foursome will advance to play on the weekend despite having taken a loss. But who will it be?

There will be no sudden-death playoff, because if only two players from a pool finish 2-1, as only two can from Pool 5, their head-to-head record determines who plays on into the weekend. If three from a pod finish tied, they will settle it in extra holes.

Everyone here is learning on the fly, and what happened in Pool 13 on Thursday was illuminating, as English, Lowry and McDowell were all eliminated from title contention for a handful of reasons.

First, English came back to beat McDowell 2 and 1.

“You’ve got to have a little luck,” English said after making three birdies in four holes to start the back nine, seizing the momentum. “Losing to Rickie yesterday, the destiny is not really in my hands.”

Sure enough, Fowler determined everyone’s destiny, locking up the pool win with birdies on three of the last six holes to nip Lowry 1 up.

“Looked like I had complete control of it, didn’t it?” Fowler said.

His win knocked English out because even if English wins and Fowler loses Friday, leaving them both 2-1, Fowler beat English on Wednesday.

McDowell fell to 0-2 despite taking a 3-up lead through eight holes, and is out of it even if he beats Fowler (2-0) on Friday.

Lowry is out of it because even if he beats English to go to 2-1, and McDowell beats Fowler, Fowler beat Lowry head to head Thursday.

“It’s not right,” one agent said of the new format.

He and Lowry and McDowell weren’t the only unhappy ones.

Bradley delivered a thunderous kick to his golf bag after yanking a two-foot par putt that would have won the 14th hole in his match against Watson, who was already 3 up and would eventually win 4 and 2.

That result left Watson (2-0) undefeated and set up a crucial match against Oosthuizen (a 2-up winner over Jimenez) on Friday. The Watson-Oosthuizen match, a rematch of their 2012 Masters playoff, won by Watson, will determine which player advances out of Pool 4.

Bradley, meanwhile, dropped to 0-2 and looked ready to scream as he stormed into a waiting Cadillac Escalade behind the 16th green and slammed the door. Time passed, the SUV didn’t move. Bradley emerged, asked what was taking so long, got back in and slammed the door again.

First, Bradley probably wasn’t going to want to come back and play Jimenez on Friday, with neither of them able to advance and only a modicum of prize money and some FedEx Cup points on the line.

And second, the Cadillac Escalade has really strong doors.

Friday’s marquee matchup will feature McIlroy and Horschel, who have a bit of history together, having butted heads at the 2007 Walker Cup. Horschel beat McIlroy, then McIlroy beat Horschel, but the bigger takeaway was Horschel struck McIlroy as a little overly brash.

“Fortunately, he’s mellowed considerably since then,” McIlroy said with a laugh before the tournament began earlier this week.

As for matches like Snedeker-Dufner, and what exactly they’ll be playing for Friday, well, there’s always pride. No one wants to go 0-3.

How is the new format sitting with the players? It depends on whom you ask.