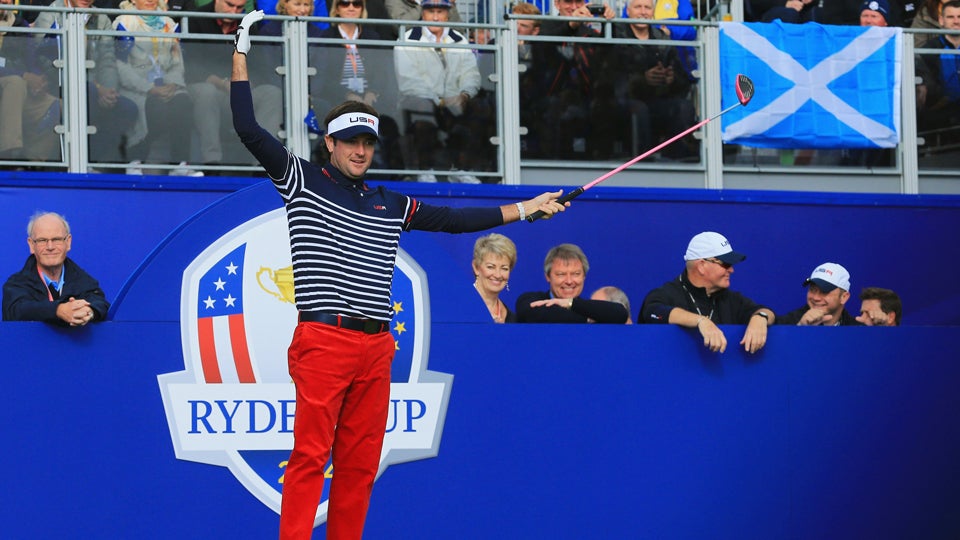 Davis Love will select four captain’s picks to round out Team USA’s Ryder Cup roster next month, and with recent mainstays like Bubba Watson and Rickie Fowler outside of the automatic qualifiers, Love’s choices are getting tougher with each passing event.

At last week’s Travelers Championship, Daniel Berger and Jim Furyk made a significant push for one of Love’s four captain’s picks. Furyk fired the first-ever 58 on the PGA Tour to move to 21st in the Ryder Cup standings while Berger ran out to a 54-hole lead and jumped to 15th in the standings.

And so the debate can stand: Would Love tap Berger or Furyk – or for that matter, Bill Haas, Scott Piercy, etc. – over a group of players like Watson, Fowler Brandt Snedeker and Matt Kuchar with more Ryder Cup qualifying points and experience?

Both Watson and Fowler (as well as Patrick Reed, No. 10 in the standings) will not add to their Ryder Cup point total by playing in the Olympics this week, however, Love noted how those three will fare in the Olympics will have substantial merit in his “unofficial points list.” “We are going to have to factor in a lot of stuff, including the Olympics,” Love said at the PGA Championship at Baltusrol. “The unofficial points list that’s running in our heads, guys that are really playing well but just don’t have as many starts is going to be a factor…When we look past the top 12, we are probably looking a little farther than people think.” That could include Berger, Furyk, Piercy (13th), Haas (14th), William McGirt (16th) or Kevin Kisner (23rd).

In the scheme of a 12-man team, a captain’s pick functions as a complement to a squad already in place. It could be a player who played well in year’s WGCs and majors or one who is peaking this summer. It could be an experienced Ryder Cupper or simply a player who makes sound analytical sense.

Captain’s picks typically play just three matches. In the seven contests since 2002, only two American captain’s picks played five matches (the maximum). The same number of picks played two matches (a reasonable minimum). With that number in mind, Love can show some analytical creativity. He could consider picking players with strengths that offset his team’s weaknesses, considering more than a quarter of the event is staged in an alternate shot format.

Watson has played three Ryder Cups and is the second-best American in strokes gained tee to green, averaging 1.356, however, his short game is lacking. He’s ranked 112th in strokes gained around the green and 138th in putting this season.

With bombers like Dustin Johnson, Brooks Koepka and J.B. Holmes likely automatically qualifying, Bubba’s pink driver might not be as great an asset to Team USA as it has been in the past. Yes, Hazeltine is long, with three par 5s that reach beyond 600 yards, but where Watson lacks in short game is where some other prospective picks have thrived this year. Below is a chart that shows how each player’s game has stacked up in 2016, according to strokes gained. These are season-long numbers that speak to a player’s shot-by-shot value and shouldn’t fluctuate much in this late-season scrum for Ryder Cup points. Looking at the numbers, Fowler and Kuchar are solid all-around players who can reasonably be paired with anyone on the team, and Berger has certainly excelled as a ball-striker and putter.

Despite the data, Love may struggle to use a pick on a Ryder Cup rookie. Back in January, he said: “It’s hard to pick a guy who hasn’t played before. So you have to balance that.”

That sounds like bad news for would-be rookies like Berger and McGirt. Each are sound drivers, good ball-strikers and solid on the greens. They’re both winners on Tour, but are competing with Furyk, Watson, Fowler and Kuchar – none of whom has won this year, but own 17 total Ryder Cups between them. The key question for Love: How good is experience when it hasn’t produced victories? The quartet with “experience” is a combined 17-36-11.

And how valuable is experience when you’re on the official Ryder Cup Task Force? Furyk and Fowler hold seats on the committee, and the other nine members all have defined roles at Hazeltine. Would Love actually leave Fowler aside?

It’s a question that will only gain intrigue with the Olympic competition in Rio this week. And don’t forget the John Deere, where assistant captain Steve Stricker is in the field and has won the event three times. He could stir the pot even more and make Love’s job that much harder.