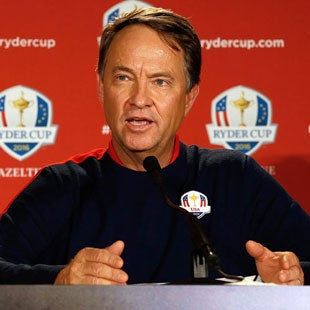 Davis Love III will be the captain of the 2016 Ryder Cup team, according to a report by the Golf Channel’s Tim Rosaforte.

Love, 50, was captain of the American team at Medinah in 2012, which lost in heartbreaking fashion after a historic European comeback in the final day of the event.

Rosaforte reported that the decision was made after multiple meetings of the PGA of America’s much-derided Ryder Cup task force that included Tiger Woods and Phil Mickelson, both members of the 2012 team. The task force was assembled after the Europeans routed the Tom Watson-led American team in Scotland, a loss that prompted Mickelson to complain that Watson did not include any team members in decisions.

Mickelson also questioned why the PGA of America had not continued to follow the program devised by U.S. captain Paul Azinger in 2008, the only American Ryder Cup victory this century.

The choice of Love is something of a surprise. Azinger and Fred Couples were the names most speculated about as the next Ryder Cup captain, and both Mickelson and Woods publicly supported Couples, who has captained three winning Presidents Cup teams. However, Couples has said he is “not a PGA guy,” and Rosaforte also reported that Couples was not popular with past Ryder Cup captains.

As captain in 2012, Love was embraced by his players, but he was criticized for letting Mickelson and Keegan Bradley sit out the Saturday afternoon team matches at Medinah at Mickelson’s request after winning their first three matches. The Europeans won the last two matches on Saturday and used them as a springboard to their storied comeback on Sunday.

Love will face off against reported European team captain Darren Clarke at the 2016 Ryder Cup at Hazeltine National Golf Club near Minneapolis. According to Rosaforte, the PGA of America will make an official announcement of Love’s selection on Tuesday. The European Tour is expected to name Clarke captain on Wednesday.

Is Davis Love III the right choice for the next U.S. Ryder Cup captain? Join the debate in the comments section below.