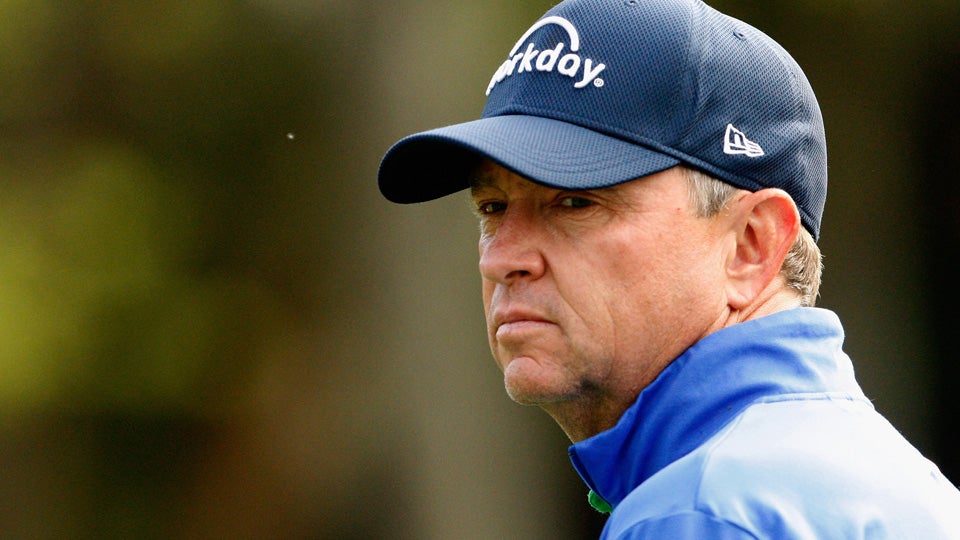 Davis Love III was snowboarding with his son Dru Love when he injured his right collarbone.
Getty Images

Davis Love III—52-year-old golfer, winning Ryder Cup captain last year, World Golf Hall of Fame inductee later this year—was planning to play a full schedule in January and February, with stops both on the senior circuit and the junior one. He was eager to see how his game matched up with Jason Day, Pat Perez and Phil Mickelson. Instead, he said Friday morning, he’ll be writing “a bunch of long overdue Ryder Cup thank-you letters.”

Love, whose long career has had numerous interruptions over the past 15 years for various injuries and surgeries, broke his right collarbone in three places while snowboarding in Sun Valley, Idaho, earlier this week. He is now recuperating at home in Sea Island, Ga., when he thought he’d be getting his game in shape to play in next week’s Sony Open in Hawaii.

Love, an active outdoorsman who hunts and fishes all over the world and has been a serious snowboarder for years, doesn’t even have an adventurous story to tell about his latest mishap. “It was on the bunny slope,” he said. “That’s where these accidents happen.” It was just an awkward fall.

After a surgery to reset the bone—with a plate and eight screws—Love’s doctors told him that even though he had “a bad break” there was no reason to think he would have anything other than a “full recovery” provided, Love said, “I don’t fall again. So that’s my goal for the next six weeks. Don’t fall.”

In six to eight weeks, Love expects he will be able to hit balls again and hope to be playing tournament golf in April. In the meantime, he will check in often on his 89-year-old mother, Penta Love, who is making a good recovery from a 2015 stroke, and his two-year-old granddaughter, Eloise Charles. He is also looking to make some hires related to the RSM Classic, the November PGA Tour event Love hosts in Sea Island.

Love also is an active golf-course architect with various projects in the works. He has a particular interest in building six-hole courses that can be played by beginners or, a resorts and retreats, in a quick and more informal way than the conventional round of golf.

In other words, he won’t be bored while he is convalescing. One thing he won’t be doing is riding a motorcycle.

“I haven’t ridden a motorcycle for four years,” Love said. Why, he was asked.

“It’s too dangerous,” Love said. “If have an accident while snowboarding, you might break a bone. An accident on a motorcycle is a matter of life and death.”

Love’s orthopedic surgeon is in Birmingham, Ala. His son, Dru, is a senior at Alabama and a member of the golf team. Love was snowboarding with son when the mishap occurred, following him down the mountain. Dru Love has a long-term plan to play professional golf, which will give him a chance to follow his father in a generally safer activity.

Both Loves, and various other family members, will be in New York City on Sept. 26 for Love’s induction into the World Golf Hall of Fame, alongside Henry Longhurst, Lorena Ochoa and Ian Woosnam.

10 things I saw at the Hero World Challenge