Davis Love Brought Back as Ryder Cup Captain, But Why? 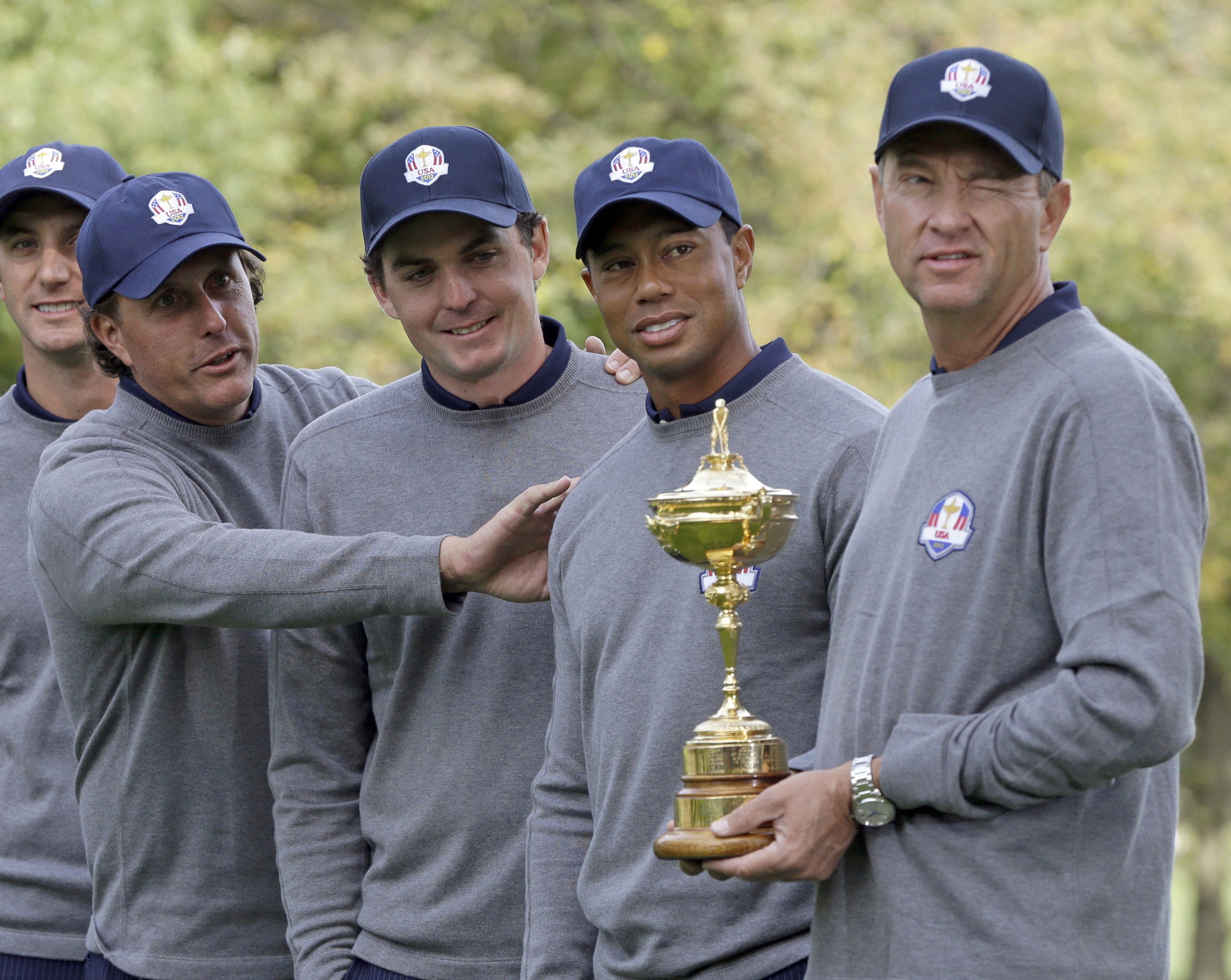 The big Ryder Cup news is that Davis Love III has reportedly been selected to captain the U.S. squad in 2016, although the PGA of America is withholding comment and has not confirmed it.

If this report is correct, it is a surprise, to say the least.

Let’s see if I got fan mail from a flounder on this hot topic in the Van Cynical Mailbag:

Van Cynical, So the Task Force basically decided to keep doing it the way they’ve always done it?
–Phil Glenn via Twitter

Absolutely not, Good Witch Glennda. When has the U.S. asked a losing captain to take a second turn before? This is completely outside the box and should throw the Euros for a loop once they stop chuckling.

Van Pickles, Isn’t it obvious that Davis Love was picked due to his closeness to the PGA of America and Fred Couples is decidedly not?
–TNCowboy via Twitter

I’m still getting over the shock, Cowhand. I thought the brilliant task force was going to think outside the box in a search for a new Ryder Cup leader and instead went with the guy whose team had a win at Medinah all wrapped up and then gargled like a bad Listerine commercial. I don’t get it. Wait, maybe I do. Davis Love was on the 11-man task force.

Not when you’re losing every two years, it’s not.

Van Conical, I always thought Davis Love lacked grit, was no match for the Euros, the epic collapse in ’12 at Medinah on home soil speaks for itself.
–Russell Olaes via Twitter

You make good points, Russell Crowe. After the last loss at Gleneagles, American “experts” were sure that it was all due to the inability of the Americans to handle the alternate-shot format. At Medinah, it wasn’t about alternate shot. The U.S. had a 10-6 lead and got crushed in singles. Singles! It’s not about the formats, as I wrote repeatedly last year, it’s about Europe having better players and more of them. Europe has fielded the better team most years since ’95 but nobody in the U.S. wants to admit that.

No, he’s waiting to see how Raymond Floyd plays in a couple of pro-ams before making any hasty decisions.

Van Cynical, Is going back to the future again really a good idea for the U.S.?
–Jarod Hitchcock via Twitter

Back to the future? It’s more like revisiting the haunted past at Medinah. There were three obvious captain’s choices this time: One, Paul Azinger, who reconfigured the selection method and came up with the pod system that, for once, enabled the dissimilar U.S. team to finally bond and win. Slam dunk. Two, Fred Couples, whose easy-going ways and affability made him a popular (and undefeated, 3-0) Presidents Cup captain. A plain old dunk. Three, Phil Mickelson, the man who blew up the post-match Ryder Cup press conference last year and a guy who’s always got a better idea. A layup, at least. I never figured Love for a second chance after the debacle at Medinah but that said, I did really like Love’s post-Gleneagles comments where he criticized the number of PGA of America officials hanging out in the team room and at the team dining table and diluting the team closeness factor.

Van Symmetrical, As a Euro fan, I thought Davis Love in many ways out-captained Jose Maria Olazabal, who, like Monty, got lucky despite having a better team.
–Chris Swan via Twitter

I tip my cap to your shrewd and impartial analysis, Swansong. If the U.S. had eked out a win, nobody would care about blowing most of a four-point lead in singles. You’re right about the luck factor: If Justin Rose doesn’t make that crazy putt against Mickelson, if Martin Kaymer doesn’t drain that par putt at 18, if Rory McIlroy doesn’t get to the first tee in time on Sunday… it may well have gone the other way. But Rose and Kaymer are world-class elite players and Rory easily dispatched Keegan Bradley without so much as a warm-up. Is that luck or skill? A helping of both, maybe.

Sickle, Davis Love is a couple of Justin Rose Hail Mary’s away from being a revered Ryder Cup captain. The line between great and goat is razor-thin.
–Chris Folds via Twitter

Van Cynical, WTF with Davis Love redux? Is Fred Couples just too obvious or do we need the additional challenge of a losing captain?
–Kokomice via Twitter

It is shocking, Micetrap, that the shirt-folders didn’t go for the obvious — Couples or Azinger. Like any appointed post, politics are involved and Fred is not a political animal. Love, a frequent PGA Tour policy board member, is a pretty good diplomat who is liked by all — isn’t that the definition of diplomat? Van Cynical, Memo to DL3: If I see MJ at Hazeltine, I’m gonna root for the Euros. He’s classless and has no business being there.
–Michael O’Connor via Twitter

I don’t disagree, Mannix. Remind me again how many Ryder Cups Jordan has helped the U.S. win? I think it rhymes with beer-oh.

Sickle Cell, Any truth to the rumor that Lindsey Vonn has volunteered to be a donor for Tiger’s glutes transplant?
–Mr. Fairway via Twitter

Time to move on from the glutes comedy train, Farley. That one pulled out of the station. We might take a look at an amazing comeback story instead: Vonn’s.

Van Cynical, Will Dan from The Dan Plan ever qualify for a PGA Tour event as a pro?
–Turtle Trader via Twitter

Well, Donatello, thanks for making me Google ol’ Dan, a non-golfer who hopes to prove that 10,000 hours of practice will get him to the Tour. I don’t know anything about Dan and his progress but the logical answer is no, he’s got no chance against players who have years and years of experience. That said, his quest probably make an excellent story and a fun journey, which is more likely the whole commercial point. I’d like to seem him get close but I’d bet he has no idea how good the 150th best guy on the Web.com Tour is — really, really good.

Vans, It’s sad to see one of the greats fail to seal the deal. Can Jim Furyk ever win again?
–Dave Conlon via Twitter

Yeah, that’s nine in a row where Furyk has had the 54-hole lead and been unable to win. That’s the aging process at work. You think maybe Tiger would like to trade places with Jimbo right now? At least Furyk keeps playing his way into contention and, unbelievably, remains the second highest-ranked American in the world rankings. That’s either really impressive or a sign that the American young players aren’t getting it done.

Vans the Man, Can you get me free rounds of golf at Pebble, Sawgrass, Cabot and Playa Dorado (actually there in a month)? Yes. You are awesome!
–Kris B via Twitter

I could have, Krissy, if only I’d stayed in a Holiday Inn Express last night. My bad. You’re on your own.

Ignore the grain on the greens and, more importantly, play away from yellow snow. Also, contact Southwest Airline, sir, as you’re now free to move about the country.

Whom would you pick as 2016 Ryder Cup captain? Join the conversation in our comments section below?