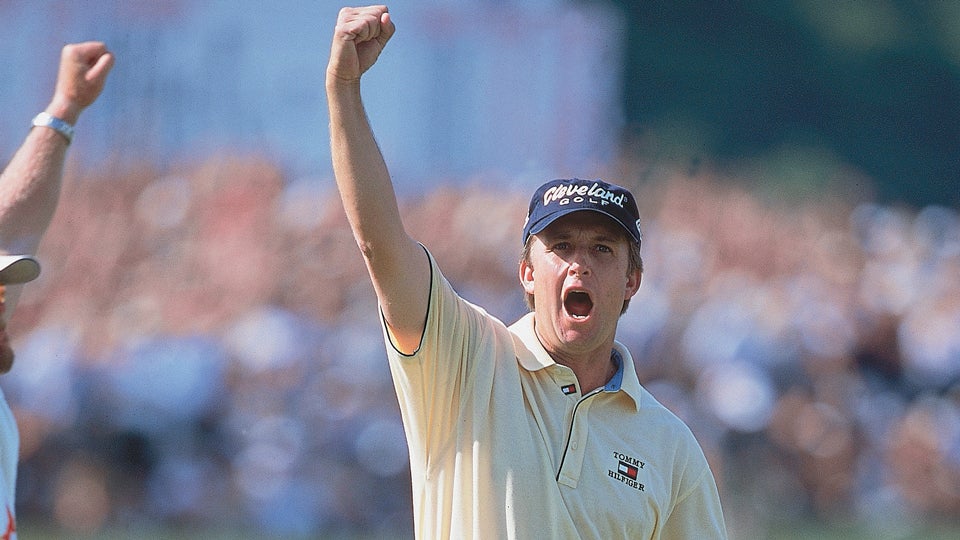 David Toms will continue to play the PGA Championship, where he won in 2001, but will transition toward the Champions Tour in a few months.
Jim Gund

JACKSON, Miss. — You should make a note that Sonya Toms, wife of golfer David Toms, will celebrate her birthday on Jan. 4. What makes her birthday so notable? Her husband shares the same birthday. He’ll turn 50 and become eligible for the wonderful world of senior golf.

Sharing a birthday has been a unique gift. “The nice thing is, I don’t forget her birthday,” David said Wednesday on the eve of the Sanderson Farms Championship in Mississippi.

There are no plans in the works for a major celebration. They used to enjoy sharing that birthdate whenever David won a tournament and qualified to play in the season-opening event for winners at Kapalua. Since he won 13 tournaments, including the 2001 PGA Championship, they were frequent Kapalua visitors. “That was always cool,” David said. “It’s a great place to celebrate.”

This year, their birthday falls the week before the PGA Tour’s Sony Open just outside Honolulu and Toms plans to play. “I don’t know,” David said. “We’ll do something fun.”

You may still be in shock over the fact that Toms turns 50 in a few months. It seems like just yesterday when he won at Colonial. That was 2011? Oh. How about when he lost the Players in a heartbreaking playoff to K.J. Choi? That was 2011, too? Oh.

Well, Toms still has game. He finished second here a year ago, a big reason he is back and excited about wherever his golfing future takes him at 49 and three-fourths. He arrived Tuesday in Jackson and when he tried to check in at his hotel, he was told it was oversold. “They put me in another hotel last night and paid for it,” Toms said. “I like that deal. Things are going well so far.”

Toms missed the cut at the 2017 season opener at the Safeway Open. He hadn’t played since The Barclays at the start of the FedEx Cup series so he was a bit rusty. He’s been working on his game, so it would’ve been nice to get two more rounds in on the weekend at Safeway.

“I didn’t play well in Napa but had a great trip with my wife and some friends,” Toms said. “I’ve been working hard on my game but I don’t know what to expect.” He’ll say the same thing about next season when he ventures onto the Champions Tour for the over-50 crew. Toms said he’ll commit most of his energy to the senior circuit. “A lot depends on how the early season goes but in my mind, it’s kind of an 80-20 split, maybe 90-10,” he said of his lean toward the Champions.

The five senior majors should be on his schedule with the exception of the Senior PGA, which is held the same week as Colonial. That’s the site of his last tour win and, he said, “Probably my favorite stop on the tour.” He will try to qualify for the U.S. Open and he likely will play the PGA Championship, since he is still eligible as a past champion.

“I don’t have any goals because of not knowing what it’s all about out there,” Toms said. “”It’s a personal goal no matter where I am in my career to continue to work at golf and have fun playing. My best golf can still compete out here on the PGA Tour but my best golf doesn’t happen near as often. The cuts out here on good courses are three, four, five under par…I look forward to playing on the weekend almost every week on the Champions Tour.”

The senior circuit doesn’t have a cut, except in its majors. It, too, is competitive, though. Also turning 50 in 2017 are Steve Stricker, Jerry Kelly, Steve Flesch and Len Mattiace.

“I don’t have an expectation that things are going to be easy,” Toms said. That goes for this week’s event, the Sanderson Farms Championship, too. Just because he finished second last year doesn’t guarantee a good showing this time. Last year, the course had barely survived 13 inches of rain. This week, the area has been suffering through a drought. Conditions are completely different. But the Country Club of Jackson is a shot maker’s kind of course, which plays into his strength.

“I like this course,” Toms said. “I wish we played more courses on tour like it where all the players are kind of in the same areas and same spots going into the greens. You don’t have to overpower the course. But you have to be pretty accurate here. I hope to build on the success I’ve had here and have a good week.”

Sounds like he’ll be too busy to wonder where all the years went.

“I was talking to one of the young guys on the range and my caddie said something about watching him in college and he goes, ‘Man, that seems like a long time ago,’ and he’s 30,” said Toms, an alum of Louisiana State University. “I’m like, geez, it was a long time ago for me. Every time I go back to Baton Rouge, I think how long ago it really was.”