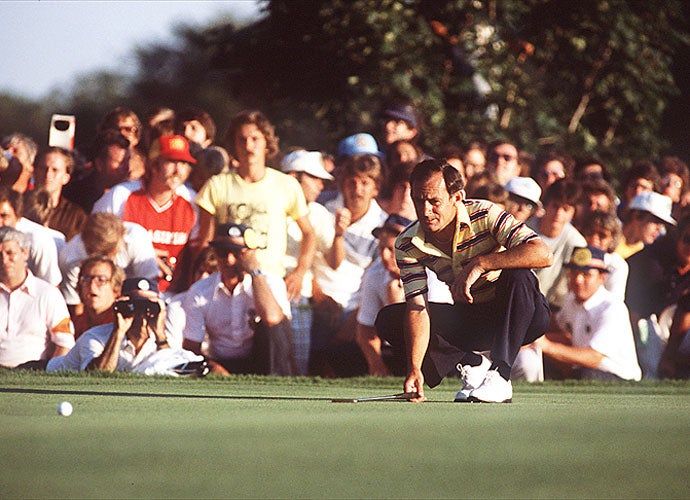 Hall of Fame induction ceremonies are always joyous and usually fraught with emotion and tears, often when you least expect it. (See: Couples, Fred, 2013.) But there will be layers of additional meaning at the University of St. Andrews’ Younger Hall on Monday, when the World Golf Hall enshrines Laura Davis, David Graham, Mark O’Meara and architect A.W. Tillinghast (posthumously) in the run-up to the 144th British Open.

This will be the first international venue for the induction ceremony, which traditionally has been held at the WGHF itself in St. Augustine, Florida. It will be the first ceremony of the new biennial framework. (The next one will be in Ponte Vedra, Florida, in 2017.) Most importantly this will be the first class inducted by a new, 16-member Hall of Fame Selection Commission, a group that takes the writers out of the equation and instead empowers many of the biggest names in the game, starting with commission co-chairs Arnold Palmer, Gary Player, Nancy Lopez and Annika Sorenstam. WGHF hopefuls must get a green light from 12 of the 16-person committee to be enshrined.

“I don’t know whether it righted any wrong,” Graham said last fall, shortly after he’d heard the news of his induction. “I think it just announced that there’s a different criteria, and players like Gary Player and Mr. Palmer have a lot more input. The criteria are now published, which I think is a good thing because it takes away the gray area that may have existed before. I give [PGA Tour commissioner Tim] Finchem full credit for saying the Hall of Fame is a place that needs to be persevered and protected, not humiliated and embarrassed. He saw that there was a problem and he fixed it.”

The problem was that the Hall was becoming increasingly hard to predict and harder to defend. Explaining the class of 2013 alone was almost impossible. Yes, Colin Montgomerie had enjoyed a long-term lease atop the European Tour money list, but no, he’d won no majors. Couples had just one major, the ’92 Masters. How could they both get in before two-time major winners like Graham and O’Meara? Was this a popularity contest? And if so then shouldn’t it be more of a meritocracy, like golf itself?

Even before the 2013 class, the WGHF had issues. Bruce Devlin, the Australian touring pro who was and is tight with Graham, once asked me, “How do you put Isao Aoki in the Hall of Fame before David Graham?” This was back in 2008, when I was reporting a feature story on Graham for GOLF Magazine. The WGHF had somehow passed him by. His own team had deserted him at the 1996 Presidents Cup, and Graham, who had been slated to captain the International side, stepped down. With the 2008 PGA Championship returning to Oakland Hills, where Graham had won the 1979 PGA, I journeyed to Montana to take a measure of a largely forgotten man.

It was a wrenching interview. Suffering from cardiomyopathy and congestive heart failure, Graham, then 62, was almost unrecognizable from the guy who remains the only Australian to win two of the four majors. (He also is one of only four players, with Hale Irwin, Bernhard Langer and Player, to win on six continents.) Graham’s final-round 67 to win the 1981 U.S. Open at Merion—he hit every fairway but the first, and every green except the two where his ball rolled onto the fringe—impressed none other than Ben Hogan, who called to congratulate him. But the David Graham I met in Whitefish, Montana, was in such rough shape he admitted he wasn’t sure he’d live to see the Open return to Merion in 2013. We started talking about his bucket list, and Graham’s tears began in earnest when he said that before he died he would like to play nine more holes with Arnie.

Meanwhile Graham’s closest friends, like Devlin, Lee Trevino and Tom Weiskopf, never gave up on him. Trevino especially lobbied hard for Graham to be voted into the Hall—the two are both members at Preston Trail Golf Club in Dallas and see one another often when Graham is at his Texas home. Ironically it was the controversial class of 2013 that proved most helpful to Graham’s cause; stung by criticism, WGHF power brokers hit the pause button to reevaluate, then re-launched a whole new Hall.

Graham still takes a fistful of pills every day to keep his heart beating. He says he is looked after by “a team of doctors” that appears to be winning. He not only lived to see the 2013 U.S. Open at Merion, he is healthy enough to travel and will be in attendance at St. Andrews on Monday.

“I was at the carwash and commissioner Finchem called me,” he said last fall when I asked how he’d heard the news that he’d been voted in. “It was pretty cool. He asked me to please not say anything to anybody which was extremely hard for me to do. I did cheat a little—I had lunch with President [George W.] Bush, and I felt like he could keep a secret, so I told him. And I told my good friend Lee Trevino, because he was very vocal about me belonging in the Hall of Fame for a lot of years.”

Palmer, too, fought for Graham, and so did Player. For Graham, and to some extent also for Tillinghast, O’Meara and four-time major winner Davies, widely considered the most accomplished female British player of all time, Monday’s WGHF ceremony will be the culmination of a great redemption story. But this is also a redemption story for the Hall itself.

“Some things are worth waiting for,” Graham said. “Isn’t that what they say?”