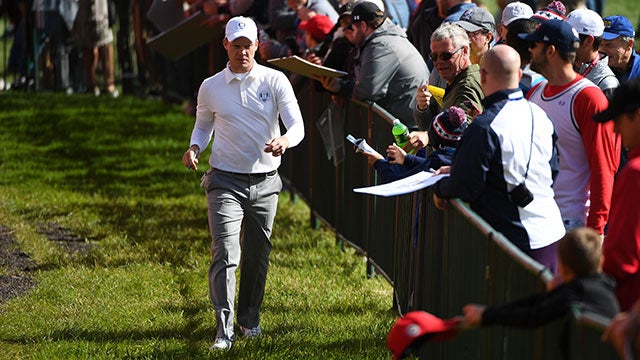 Danny Willett runs to a tee box during a practice round on Thursday.
Getty Images

And it’s not for anything he actually did. His brother, Paul, penned a satirical article for National Club Golfers, where he eviscerated U.S. Ryder Cup players and fans. (A sampling: “They need to silence the pudgy, basement-dwelling, irritants, stuffed on cookie dough and pissy beer, pausing between mouthfuls of hotdog so they can scream ‘Baba booey’ until their jelly faces turn red.”) Naturally, it got the red, white and blue faithful riled up.

First, Darren Clarke disassociated from the letter. Danny himself said he was disappointed. Then some golf publication posted an open letter back to Pete. As luck would have it, Danny was one of the last Euro players to speak to the media this week, and his press conference was jam-packed with journos eager to get the scoop about LetterGate. The first line of questioning wasn’t about the Masters champ’s first taste of the Ryder Cup or anything having to do with golf at all. It was, of course, about the letter.

Danny said Pete had apologized to him, but that they would “have a nice little chat” once he got home. “I was disappointed in what he wrote,” Danny said. “It kind of put a damper on my first Ryder Cup. It’s supposed to be a special week.” How sad is that? The 10th-ranked player in the world and reigning Masters champion can’t enjoy an experience of a lifetime because of poor decision-making skills shown by his brother and poor reading comprehension skills by the general public. He was asked 15 total questions, and 13 of them were about his brother and the backlash from the letter.

He now has a target squarely on his back. As nice as midwestern folks can be, if the Ryder Cup is still the Ryder Cup, Willett will hear jeers from his first match until the final point.