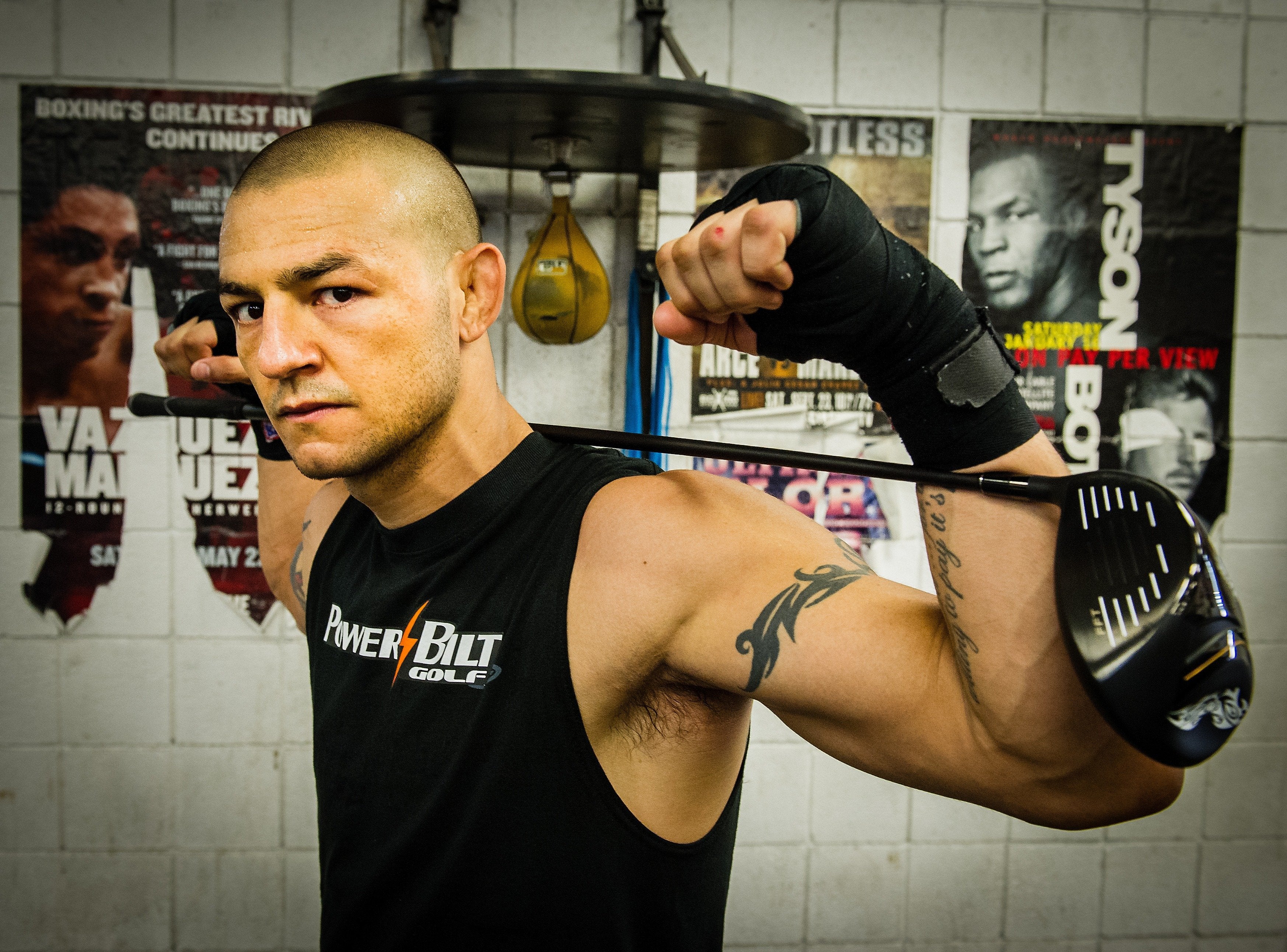 Swanson has been sponsored by Powerbilt since 2013 and tries to play golf once a week.
Cecil K. Brissette

Cub Swanson is one of the most fearsome fighters on the planet.

He is the fifth-ranked featherweight in the Ultimate Fighting Championship, the world’s largest mixed martial arts promotion competition. He earned his favorite victory with two broken hands. He fractured his right hand during training, but he snuck the injury past the commission by containing his reaction when the ringside doctor squeezed his gloves. He cracked his left hand during the fight. Swanson won by choking his opponent into submission in the third round.

Swanson makes his living in a blood sport with the help of a gentlemen’s game. One of his biggest sponsors is Powerbilt, one of the country’s oldest golf equipment companies. A division of Hillerich & Bradsby, the family-owned company that also makes Louisville Slugger bats and Bionic gloves, Powerbilt has been making golf clubs since 1916.

Whenever Swanson fights, he does so in Powerbilt trunks and with a Powerbilt banner hanging in his corner. With its bone-shattering punches and bloodthirsty fans, the UFC seems an unlikely arena for a struggling golf company to rebuild its brand, but that’s exactly why Powerbilt president Ross Kvinge decided to sponsor Swanson in 2013. It doesn’t hurt that Swanson is an avid player who regularly shoots in the 80s.

“We think we can grow the game and get kids hooked on golf by making it a little edgier, a little more fun,” says Kvinge.

The numbers support Kvinge’s point. According to the Sports & Fitness Industry Association, golf participation fell for the fifth consecutive year in 2014, with a 13% drop in the number of golfers ages 18 to 34. That demo happens to be where UFC performs best. According to Scarborough, about 44% of UFC fans are 18 to 34. The average age of a UFC fan is approximately 40, 10.5 years younger than the average for fans of the PGA Tour.

In some ways, it’s a surprise that Swanson, 31, wasn’t introduced to golf sooner. He grew up in Palm Springs, Calif., which has one of the highest concentrations of golf courses in the country, but he didn’t take up the game until long after he had begun fighting.

“Golf didn’t seem like it was for everybody,” says Swanson. “I didn’t grow up with a whole lot of money, and my perception was that golf was for a snootier crowd.”

Swanson’s childhood didn’t include the golf resorts that are splashed in glossy magazines. A youth filled with parties, guns and frequent brushes with the law had Swanson searching for an outlet to keep him out of trouble. He stumbled upon mixed martial arts and “fell in love.” Against the advice of his friends, he traveled to Tijuana for his first professional bout in 2004 because MMA had yet to be legalized in California. He lost in 30 seconds.

“Everyone kind of said, ‘I hope you got that out of your system,’” says Swanson. “It ticked me off.”

He won his next 11 fights. His unorthodox style — a unique blend of boxing, Brazilian jiu-jitsu and judo that his fans call “Beautiful Destruction” — has earned him 21 victories, 11 of them by knockout.

Today, Swanson owns a gym called Tru MMA with his older brother, Steve (who fights for Bellator, MMA’s equivalent of the Web.com Tour). Between running a business and training, he doesn’t have much time for other pursuits, but he tees it up about once a week.

Swanson knows he can’t fight forever, so like a lot of us, he sees golf as a potential pastime in retirement. In the meantime, he’s eager to leave his own mark on the game. “You can see now that the top guys [on Tour] are younger guys who are in shape,” he says. “Golf is about power and balance, and it’s the same in fighting. If you have confidence in your physicality, you’re going to be mentally strong.”

In January Swanson hosted a junior golf clinic for Powerbilt at the Humana Challenge in La Quinta, Calif., where he emphasized core strength and fitness as the keys to a solid golf game. “He’s the most mild-mannered guy you’ll ever meet,” says Kvinge, “and he’s great with the kids.”

And those troubling demographics? Swanson is doing his own small part to change them.

“I like steering kids toward golf,” Swanson says. “If they really have it in their blood to fight, then fine, but it’s a hell of a job. Golf is a safer bet.”