Who says you can’t mix politics and golf?

According to the Nevada Independent, LPGA star Natalie Gulbis is considering running for Congress in Nevada’s third congressional district. She lives in Lake Las Vegas, Nevada, where Republican incumbent Jacky Rosen has indicated she plans to run for Senate and will vacate the seat.

Gulbis, a staunch supporter of President Donald Trump, met with Republicans this week in Washinton, D.C., to explore the idea. Gulbis has always been very public about her support of the president. “He’s helped me think of new ways to grow women’s golf, advised me to never accept the first offer, and emphasized time and again that there’s room for women’s golf in a crowded sports world,” she wrote in a January 2016 column for GOLF.com. 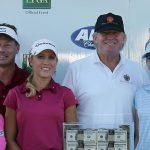 You may also like The Donald Trump I Know, by Natalie Gulbis

Gulbis also spoke at the Republican National Convention ahead of the 2016 Republican primary, where she said Trump encouraged her to stand up to gender injustices.

Historically, Gulbis’s district has enjoyed long term Republican representation. Democrats have only won there twice and for one term each, the last in 2008.

“I think there is intrigue and she definitely has some interest but everyone, including Natalie, is trying to figure out whether it is the right fit,” the Independent quotes a well-connected Nevada GOP strategist as saying. “NRCC is casting a wide net and they rarely engage pre-primary.”