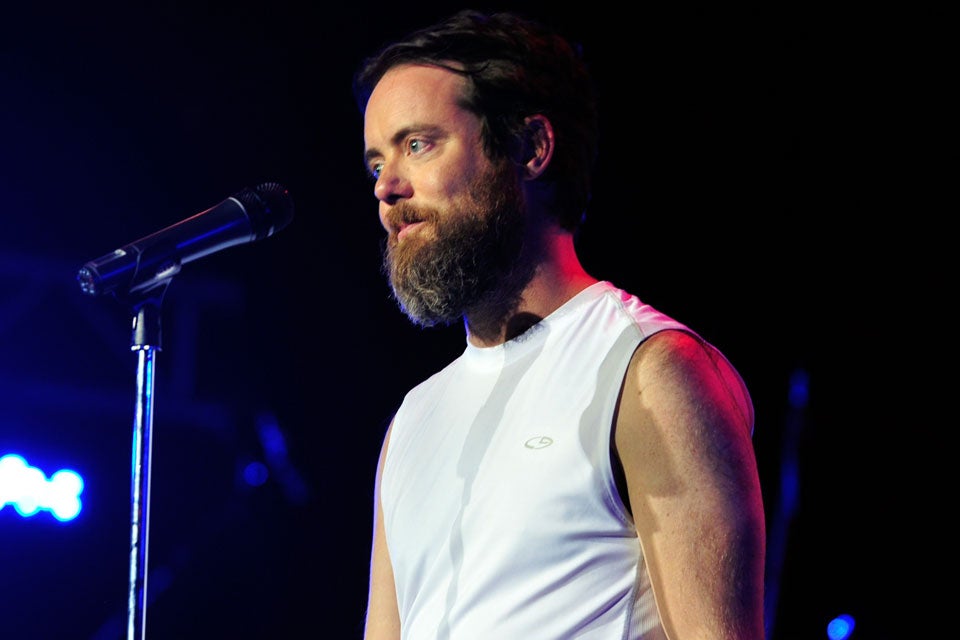 The comedian Jon Daly is not to be confused with the golfer John Daly.

Unless you tune in Masters week to the Adult Swim Golf Classic, a half-hour televised special that stars Jon Daly as John Daly in a match-play competition against Adam Scott, portrayed by none other than the comedian Adam Scott.

Set in 1966, the head-to-head event lampoons the sepia-toned conventions of Shell’s Wonderful World of Golf, with twee narrations layered over fawning golf course footage, and softball interviews on the tee.

But it also draws comedic fodder from the character of Long John, golf’s famously hard-hitting and hard-living Everyman. Unlike the two-time major champion, Jon Daly (Zoolander 2) isn’t much of golfer. Neither is his co-star, who employs a broomstick putter — but not an Aussie accent — in his impersonation of the smooth-swinging Scott.

But what the two actors lack in shot-making ability, they make up for in sketch-comedy skills.

In anticipation of their exhibition, which airs Thursday, April 8 at 11:30 ET, GOLF.com caught up with Daly (the comedian, not the golfer) to ask about the inspiration for the show, what he finds so humorous about golf, and whether, like his namesake, he can be trusted to drive a ball that’s been teed up in someone else’s mouth. GOLF: Jon Daly as John Daly. Was that a big dramatic stretch?

Daly: This entire project came about because of the identity thing. It exists because my name is Jon Daly. I was around 12 years old when John Daly burst onto the scene, so I was kind of obsessed with him. He was different from all the other golfers and I loved him for that. He wasn’t stodgy. He smoked. He said what was on his mind. He wore crazy clothes. But later when I was becoming a comedian, I realized that my Google search was completely eaten up by John Daly because he had already been famous for decades.

GOLF: Not great for someone trying to get his own name out there.

Daly: The first iteration of this project was making a website jondalyisjohndaly.com. I launched that a few years ago and it’s still up. I’d get in about four-hours worth of makeup. I bought a bunch of Loud Mouth Pants and I took a lot of candids of myself on the golf course as John Daly. The site was basically a mechanism for people to disseminate those images on the Internet. After a while, if you did a Google search of John Daly, pictures of me as him would be intermingled with images of him as him. And then I did a movie, The Secret Life of Walter Mitty, and on the set I met the actor Adam Scott. It turned out he was getting a lot of Google alerts for the golfer Adam Scott. We got to talking and decided, OK, we have to do something with this.

GOLF: Shared names aside, was there anything about golf itself that you found inherently funny?

Daly: I played hockey as a kid. I wasn’t a golfer. But my dad was, and I watched a lot of it with him and I thought televised golf was hilarious. There are so many nature sounds, so much dead air. There’s nothing like it. The quiet clapping. The whispery-ness. And then there’s this baked-in properness that doesn’t really make sense in the world of sports. Athletes for the most part are crazy people, so the idea of people being exceedingly polite during an athletic event was just really funny to me.

GOLF: It doesn’t get much more polite than Shell’s Wonderful World of Golf.

Daly: As I started formulating this, I watched some of those early Shell matches and it became clear to me that we had to imitate it. The pace of them was even slower than the pace of regular televised golf, with that feeling of golden history and trapped-in-amber moments. It just seemed like the perfect backdrop for something as absurd and dumb as what we wanted to do. And setting it in the ’60s just increases the absurdity of it all.

GOLF: And I noticed that you filmed it at one of Donald Trump’s courses, no less.

Daly: Which, by the way, was done when that was still a funny thing.

GOLF: To play Daly, did you have to pull a DeNiro and gain or lose weight?

Daly: No. I went pretty much as is.

GOLF: What about anything else to get into character? Chain-smoking, chugging whiskey?

Daly: Yeah. All that. I tried to stay on brand as much as I could. Also, I was platinum blonde for two weeks, which was, as it turns out, not more fun.

Daly: Big John is a golf rock star so autographing female body parts is just part of the frenzy. I don’t know if he’s clocking Gene Simmons numbers, but I bet he’s signed a couple thousand tanned bodies, if not on the breast, then I shudder to think where. But signing breasts wouldn’t really happen on TV in the ‘60s so we didn’t go there. You probably couldn’t even say the word pregnant on TV in 1966. You’d have to say, “she’s fancy” or some crap. It would have been great to get a nice mid-60s Airstream as a period version of John’s famous RV, and have him park it out front with all sorts of period Daly merchandise and classic vinyl versions of his country rock albums, but we wanted this one to be about the golf.

GOLF: Right. The golf. What kind of player are you?

Daly: I started playing in my 20s, and I’ve been building it very slowly. I play 18 holes once a year, with a few par-three courses and driving ranges thrown in here and there. In the show, you see me being terrible on the course, but that’s not me trying to be terrible. I’m just terrible. I’m at the point where the game is just pure frustration because it’s so hard. I need to get about 20 percent better to enjoy it more but even then I would still be awful.

GOLF: So I shouldn’t let you tee one up in my mouth, like Daly does with people?

Daly: We actually recreate that stunt in the show, just a quick hit in beginning when we introduce Daly. He drives a ball out of kid’s mouth and then the kid gets up and gives John a dollar and Daly shoos him away, like, Get outta here kid.

GOLF: You didn’t really hit the shot out of his mouth, did you?

Daly: That was movie magic. We used a prosthetic head and then edited the kid in there afterwards. If we’d used a real person, they would either be dead or they wouldn’t have a nose because I’m so bad.

GOLF: At one point in the match, you throw your seven-iron into a pond and then dive in after it. Was that an improvised scene?

Daly: I’d planned that out. It was a direct tribute to a couple of John’s club-throwing moments in the past. But in this one, instead of John Daly just throwing the club, John Daly himself goes into the water, too.

GOLF: Did you test out the water before plunging in?

Daly: I did. And it was pretty nasty. California is a desert, obviously, so it was basically standing water in a desert. At one point, you see me pull up a bunch of pond scum, so at least there were plants, which means that maybe it wasn’t just pure acid.

GOLF: Were there any especially funny scenes that you had to leave on the editing floor?

Daly: All the outtakes are pretty much in there. If you miss anything it’s really just some of the truly awful shots we hit. Balls flying into the ocean. Us hurting ourselves with our own swings.

Daly: No, but I would love to. I feel like I’ve known him from all the years on TV. I’ve loved the guy since I was 12. I’ve watched every interview with him, read every article about him. I’ve listened to all his music. I’ve gone shopping for an absurd amount of Loud Mouth clothing. Everything the guy does is just so great.

GOLF: Do you think he’s going to tune in to this special?

Daly: I don’t know, but what I would really love to work with him on the next one. I would love to play John Daly in a match against John Daly. John Daly competing against himself. The epic-ness of that would be undeniable. That would be so insane. Wow. But this is just me, dreaming.