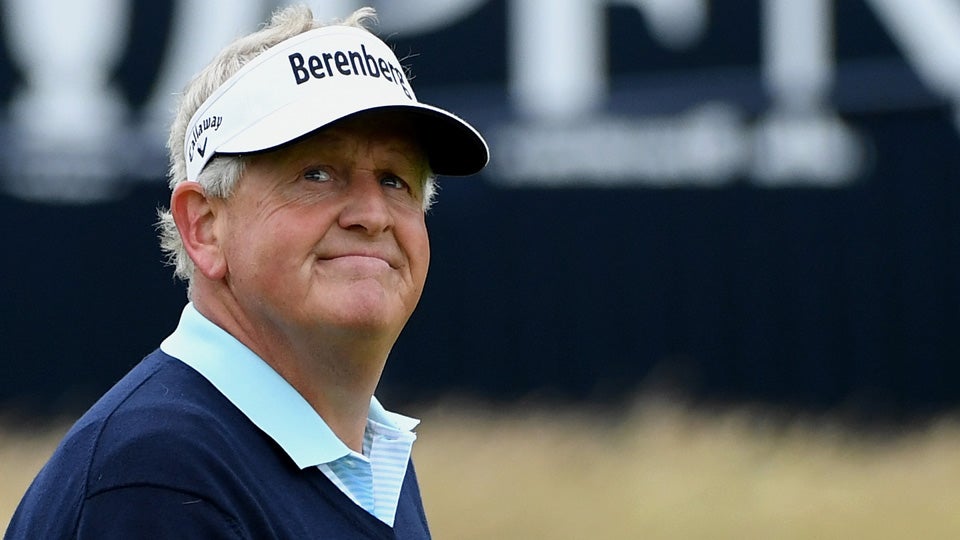 COLUMBUS, Ohio — Colin Montgomerie is playing in the U.S. Senior Open here this week for one reason. It’s the same reason he finally won his elusive major two years ago, beating Gene Sauers in a playoff at the Senior Open.

The World Golf Hall of Fame.

He was belatedly inducted in 2013 a month before he turned 50. Hall of Fame membership comes with exempt status on the Champions Tour or, as the corporate guys now want you to call it, PGA Tour Champions. Suddenly, Monty had a reason to keep playing golf.

“I didn’t think I was going to play senior golf, I must admit,” he said Wednesday before play begins at Scioto Country Club. “I wasn’t excited about turning 50. I don’t think anybody is. I felt when I was 50, well, I’d be walking the dogs around the pond at home.”

He is proud to be a paid member of the tour, something he wouldn’t have dreamed of in the early ’90s when the PGA Tour and the European tour had a little bit of a squabble going on about who could play where and how often if they weren’t a tour member. That was back in the Us Against Them, War By The Shore Days, and it wasn’t until the early ’90s that many European players even began considering playing full-time in the U.S.

Time changes everything. The PGA Tour got Monty in the Hall and it wasn’t terribly fun playing a few European tour events and not being competitive. If he hadn’t gotten into the Hall of Fame—and a number of voters didn’t think a majorless player should—he wouldn’t have been exempt for senior golf and he probably never would have come over to play.

“A lot of guys tread water from 45 to 50, waiting to come out here and play,” Montgomerie said. “I wasn’t one of them. But this tour has given everybody a new lease on life, a new chapter in one’s book. Certain people, a new book completely. I’ve done reasonably well. I’m thoroughly enjoying it. It’s a much better place to play golf than I ever thought it was going to be.”

His U.S. Senior Open victory brushed up his image, his confidence and made those chips fall off his shoulders. He has been a happier man since, and it is evident when he makes the occasional Golf Channel appearance at a major and offers his analysis on a panel with Brandel Chamblee, Frank Nobilo and the rest. You can tell that Montgomerie relishes the chance to share his opinions, enjoys the fact that they’re sought after, loves sparring and maybe even competing a little with Chamblee. He’s having fun. He is a golfer at peace.

“As I said after the playoff, I’ve been trying for 20-odd years to win a USGA event and finally, I managed it,” he said. Monty added a note of irony about how it came in a playoff.

“I lost a few playoffs,” he said with a smile. There was the three-man affair at Oakmont in the 1994 U.S. Open, won by Ernie Els. There was a PGA Championship playoff against Steve Elkington at Riviera in 1995. The old Monty wouldn’t have made a crack like that. This is a kinder, gentler Monty who is willing to poke fun at himself.

He won the Senior Open two years ago and was runnerup last year to Jeff Maggert. This is senior golf, it’s still fun to compete.

“To have that magnificent trophy in the house for a year was superb, and I look forward to trying to do it again,” he said. “It was more relief than anything else. It was a thrill.”

Scioto, the course where honorary tournament host Jack Nicklaus grew up, is a classic U.S. Open course where golfers are penalized for missing fairways or greens. There is rough, of course, and Scioto is covered with unfriendly greenside bunkers.

“You cannot score around here if you start missing the fairways, you’re on a bogey trail that won’t stop,” Monty said. “You’ve got to be able to put the ball on the fairway, and that’s what I like.”

He is 53 and not hitting the ball as far as he used to, he says. That’s normal. His golf game has evolved, however, to become more complete. “What I’ve been surprised about and shocked about on this tour is how well they putt,” Monty said. “I thought at 50 you began to lose your nerve, and these guys weren’t great putters. I was well wrong there. The putting is incredible and they’re not wasting any shots.

“You watch Bernhard Langer chip and putt. I’ve watched him for 35 years. He takes long enough to do it so there’s time to watch him.”

The old Monty would’ve said that in more of a catty tone. The new Monty is giggling even as he’s trying to give the needle to his good friend and frequent former Ryder Cup partner.

“It’s amazing how he doesn’t waste a shot and that’s the momentum that keeps going for the next hole,” Monty said. “It’s the way that Mickelson and Woods kept themselves going, hitting the ball all over the place, really. Getting up and down saved them. That’s what I’ve gotten better at on the Champions tour. I had to. I got to No. 2 in the world in the ’90s, and I believe I’m a better chipper and putter now than I ever was.”

The self-belief is still there. If it ever left or even cracked, that Senior Open title restored it. A golfer needs that to truly succeed. And other things, like loving your surroundings. That isn’t always easy for a player from another country, no matter how similar they may be.

“I think you learn and you mature as you go along, and I didn’t embrace the American public possibly the way that I should have earlier on in my career, and it hurt me in majors,” he said. “I’ve embraced playing here since I turned 50. I really am enjoying it, and I think the golf fans are seeing that, and they are giving back. So it’s a two-way street.

“The Champions tour is a fabulous place to play. We’ve all attained a certain standing to be here. There’s no great envy out here. Everybody seems genuinely happy with anyone else’s success, and it’s just a very welcome place to be. There’s a warmth here that I haven’t felt in the past, and I blame myself for that sometimes that I didn’t give it an opportunity. Now I am, and I’m enjoying it.”

One other thing he enjoyed recently was the British Open at Royal Troon. It’s his home course, his father ran the club for years and, in fact, still lives nearby. Monty made the cut at the Open and after he finished, he went to his boyhood home to shower and change before returning to the course to do some television commentating. He was treated to watching the showdown between Henrik Stenson and Phil Mickelson, which Stenson won with a 63.

“All great events are competition based,” Monty said. “That was what we had in 1977 at Turnberry with the famous Duel in the Sun with Watson-Nicklaus. All credit to Jack Nicklaus for making it such an event. And I have to say all credit to Phil Mickelson. Without Phil Mickelson, it wouldn’t have been memorable because Henrik was 14 shots ahead of third place.

“You’ve got to say, Wow, that was something that we might never see again, 14 shots between the leader and third. You’ve got to look back on Tiger’s display in ’97, and you’re talking 20 years ago. This has put Troon on the map, if it wasn’t already, and we’ll talk about that Open for a long, long time. They said the scoring was low. No, it wasn’t. Six under was third. That wasn’t low scoring. It just so happened that two guys went mad, and they drew the best out in each other.”

Look for Monty to have a good week. Scioto demands the best from a player and it demands accurate tee shots. That is right up Monty’s alley. Plus, the man is enjoying the time of his life, finally.