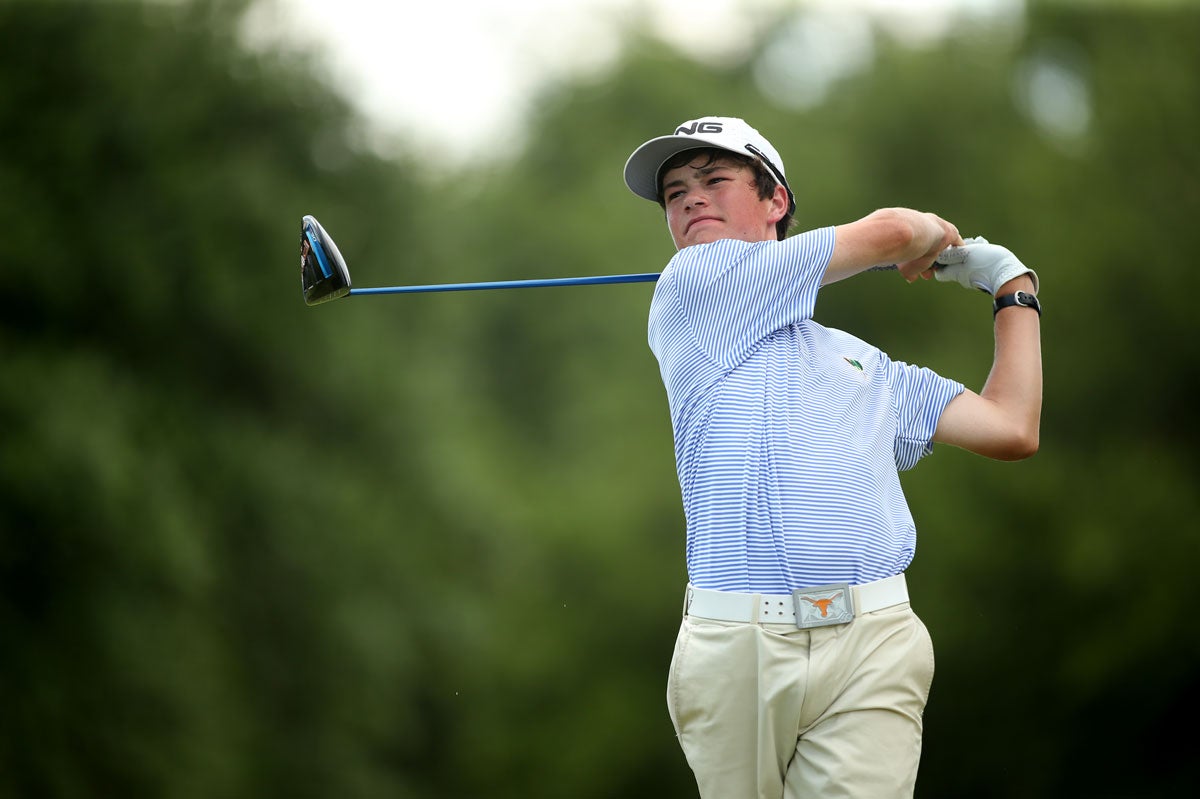 DALLAS — Houston’s Cole Hammer, all of 15 years and 125 pounds, elbowed his way into U.S. Open golf history and Texas golf lore Monday, becoming the third youngest qualifier and player ever to make the Open, qualifying for the 2015 tournament at Chambers Bay with rounds of 64-68-132.

“I thought it was a bit of a long shot, but I figured why not,” said Hammer, who was 15 years, 10 months and 20 days when he finished second in the Dallas sectional qualifying at the Northwood Club, the site of the 1952 U.S. Open.

“I never dreamed I could do it. This means the world to me. When I saw Jordan (Spieth) win the Masters (at age 21), I said, alright I can do this.”

Now he will have a chance to tee it up with Spieth and Spieth’s college teammate Cody Gribble, who also qualified in Dallas, June 18-21, in the first Open ever in the Pacific Northwest. Like Spieth and Gribble, Hammer has committed to play golf at the University of Texas.

“I’ve never been to a U.S. Open before, I was just hoping to make the U.S. Junior later this summer,” Hammer said. “We didn’t have any plans for that weekend, but I guess we do now.”

China’s Andy Zhang played in the 2012 U.S. Open at the Olympic Club at age 14 as a second alternate after two players ahead of him pulled out due to injury. Hawaii’s Tadd Fujikawa was 15 years, 5 months when he qualified in 2006 at Winged Foot Golf Club. Tyrell Garth was 15 years, 11 months when he qualified for the 1941 U.S. Open at Colonial Country Club in Fort Worth.

Hammer had never won a national or prestigious junior amateur tournament, but made it to the sectional or second stage of Open qualifying after advancing through the local qualifier with a 68 at Deerwood Country Club, near his home in Houston.

He has won several local junior Texas tournaments, but starting early Monday, he blitzed the fabled course with a 64 on the first 18 holes. It was just two shots off the course record once held by PGA Tour winners Justin Leonard and Hunter Mahan. Hammer had six birdies, including three of the first five holes, and no bogeys.

Going back to play after the first 18 holes, it was a close race who was more nervous, his dad/caddy Greg Hammer or his longtime teacher Kevin Kirk, watching from Houston.

“I think I wore out the refresh button on my computer hitting it to get score updates,” said Kirk, who also teaches PGA Tour winner and Open participant Patrick Reed.

“Patrick and Cole have crossed paths on the driving range before, but I don’t think they have spent a lot of time together. I’ll work to get a practice round together for them at Chambers Bay.”

Hammer was clearly inside of the qualifying line, with six of 78 golfers going to the Open, after the first 18 holes, but had to sweat out the second 18 under temperatures which reached 95 degrees.

In the afternoon, he came back with two bogeys and one birdie and was one shot outside of the cut line after a bogey on No. 12. He rebounded with four birdies sandwiched around one bogey including a 12-foot birdie putt on No. 17 and a four-foot tap-in on No. 18 after two brilliant approaches.

Greg Hammer said he didn’t know where his son stood until they got to the 17th green at Northwood.

“We set our goal at 10-under-par, but I just told him we needed one more birdie to feel comfortable.”

He did that and more with a memorable approach shot on 18 which hit the front part of the green and rolled close to the cup. He made the birdie putt and hurried to his mom’s I-phone to check out his overall score.

“I felt some pressure on the first hole, but after that I was OK. I knew I had to makes birdies and this gives me all the confidence.”

Now he can test that confidence against the world’s best players in less than two weeks, another link in the seemingly unending Texas state golf dynasty.